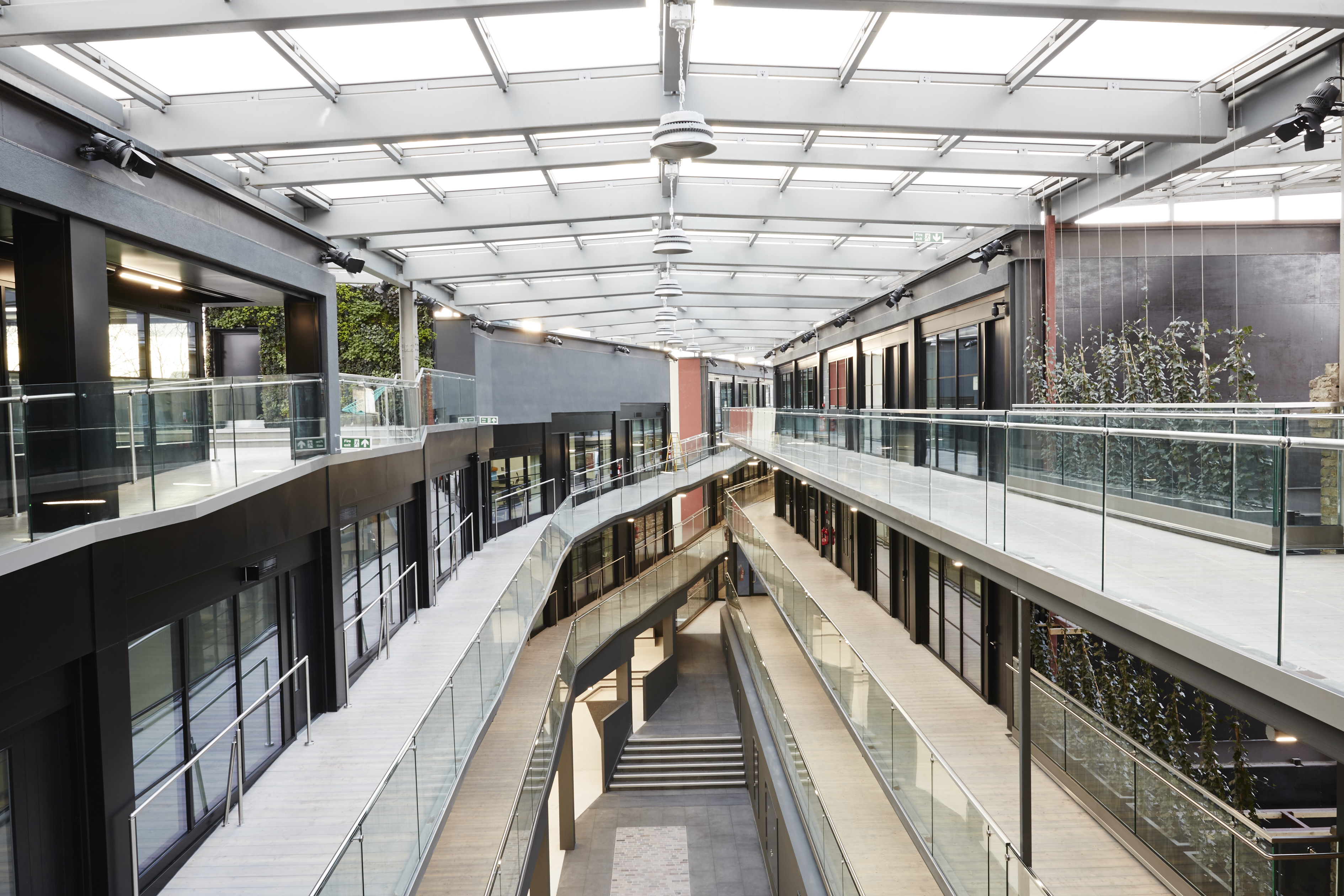 The concept of co-working, placing your business in a hopefully collaborative and open environment with other companies, is a trend impossible to ignore. First entering the market as a way for new enterprises to access work space at a lower cost, they have arguably become a preferred environment for many ambitious business leaders.

Interchange served as the first of our immersive looks at the co-working scene. Located in the heart of the historic Camden Locks development, it is an 84,000 square foot space for?entrepreneurs and creatives. Spread out over three sites, the interiors are the work of Tom Dixon and the entire operation is backed by Market Tech Holdings ? a public company steered by Israeli businessman Teddy Saghi and in ownership of over ten acres in Camden Town.

This journalist was invited to spend the day in the complex?s Triangle site, a space offering panoramic views of London. Curved wing-backed chairs were arranged in a semi-circle, pointing towards the floor-to-ceiling windows and offering a unique glance down into the comings and goings of Camden Market. A rather predictable exposed ceiling revealed a web of cabling, broken up by a striking bronze lighting installation that seemingly typifies the Tom Dixon look. Greeted by Interchange?s managing director, Vanessa Butz, we left Triangle and stepped out into the drizzle and commotion of the market. She left a job with Factory Berlin, in the German city, to come head up Interchange. Before, she was responsible for developing the community, operations and events at Factory Berlin, a 16,000 square metre startup campus. Meandering through the Stables, a site which once served as the resting point for horses dragging barges along the canal, we encountered the businesses which have come to typify the Camden Town image. Tourists come from all around the world to visit the area, drawn by its punk rock heritage and endless maze of crazy shops.

The area around Camden Lock was originally used as a key trade route from the Midlands to London in the early part of the 19th century, Butz told me. ?Later on in the 1970s, the markets were first established and Camden developed a reputation for cutting edge fashion, music, art and creativity,? she added. ?Interchange will continue this tradition of Camden as a business and creative hub, by bringing new, innovative companies and opportunities to the area. Over 68 per cent of all UK jobs are created by startup firms, so this is an ideal type of company to be encouraging to Camden ? inspiring local growth, opportunities and innovation.? Stepping into the large Atrium building, we came across an example of how the space is being used by others in the area. An undergraduate fashion exhibition was in the process of being established, further emphasising the creative culture Interchange is keen to cultivate.

We wanted to know what makes Interchange different from other co-working spaces in the capital and further afield, so pressed Butz on clarifying this. ?What makes Interchange different is the unique framework that we provide for our tenants. By offering an environment and facilities that encourage innovation, we enable companies and entrepreneurs to scale their businesses effectively. ?As an important part of this, Interchange members will have the opportunity to bring their products directly to the consumer and establish their own space in Camden Market, which has over 28m visitors a year. We see this as a great opportunity for growing businesses to connect with the wider London population and visitors, plus, bridge the gap between ecommerce and the market?s vibrant physical space.? Interchange was formally launched to much fanfare in May, when the likes of Mind Candy founder Michael Acton Smith, serial investor Saul Klein and ASOS creator Nick Robertson were on the lineup of speakers.

Walking around Atrium?s elevated walkway, taking us from the open-plan courtyard to the roof-top bars that populate the fourth floor, I was told of the wide range of companies that have made it home. Alongside new and exciting creative companies, corporates such as KPMG and Cisco have a presence. Revealing how she will go about maintaining a good balance of freelancers, small startups and corporates, Butz commented: ?Even though Interchange is open to all creative, innovative and fast-growth companies, who are looking for an inspiring working environment that will support them from startup through to scale-up, maintaining a good balance through community curating is very important to us. ?We truly believe that it?s important to maintain a healthy mix between very early stage companies, startups, growth companies and corporates.?

Wanting to get the other side of the story, I met up with two resident businesses during my stay. First to answer a few questions was Daniel Jung, co-founder and COO of Doctify ? a platform that connects patients with doctors. Jung and his business are a bit of a veteran in the co-working space, with their office set-up in Triangle being the third. Starting out at Warner Yard, owned by Playfair Capital, Doctify very quickly outgrew what Jung described as ?very cosy environment, like a living room?. Moving on to WeWork, the global co-working organisation that 105 locations in 29 cities, the entrepreneur soon realised he?d gone a bit too far. ?When we moved out from Warner Yard, we were a team of about eight ? we?d outgrown the space there. Then at WeWork we were driving the Ferrari of co-working spaces for a few weeks, but I warned the team we might have to scale back down to a Skoda. Revealing that the WeWork space was too big for Doctify, he added: ?How much fun is it do drive a Ferrari in London on a normal street, there is a bit too much horsepower.? Taking up residence in the Triangle building of Interchange, the business did a six month test and recently signed up for a full year after being impressed so much. For Jung, when starting out with a new business, you must strike the right balance between the funding situation and what is possible to spend on facilities.

?We could have rented a place with what I call a ?stinky carpet?, but that?s not good for attracting talent. Being in a curated environment is good for talent ? people are always impressed by the features.? One of the biggest benefits to being located within Interchange came in the form of a chance meeting with the Duke of York. Invited in for a different reason, the Duke ended up in a conversation with Jung and invited the business to present at his Pitch at the Palace event. Ending up as runners-up, it led to 6-7 meeting with potential investors ? an example of what can happen by being located in a collaborative space. But how much does it cost to set up at Interchange? A flexi desk start at ?40 per month, while the fee for a fixed desk begins at ?450 a month. An office with 2-4 people in will set you back ?700 a desk per month, while 5-9 is ?600 a desk and over ten ?550 a desk. Once a business gets to a certain size and outgrows Atrium and Triangle, there is its Utopia building in Primrose Hill where a more traditional approach to office rental is found ? at ?65 per square foot. ?At Interchange, we have great options for anyone who?s simply looking to work in a new environment for one day, right through to people looking for a more permanent space that they can make their own,? Butz explained. ?Another benefit of co-working spaces is the access that a community environment can give to companies.?

Another company firmly imbedded in the Interchange community is IncuBus, an enterprise that lived up to its name by formally being based in a big red London bus. It works with entrepreneurs to support sales traction, positioning itself after the traditional accelerator programme and helping to connect with big brands such as ASOS and Tesco. George Johnston, co-founder of IncuBus, told me: ?For us, this space is so beautiful and easy to invite people into. It?s important for our startups, as they?re dealing with important clients, to be able to do that. ?The most important thing is networking, and spaces for events. We get free event space with our membership, and that is worth the money in itself in London.? However, he did warn that co-working spaces are more of a draw for extrovert-type people. If he really needs to get something done, it invariably means squirrelling himself away in a corner to remove the often constant distractions of a co-working space. My visit to Interchange was an enlightening experience, and provided an interesting insight into how the historic space in Camden Town is being used. Interchange has created an offering that serves as a curated working space for creative businesses, bolstered by amenities like free event space, bars, an in-house restaurant and a constant stream of talks, parties and demos. The two business leaders I spoke to have found that the environment works well for them, the flexibility meaning new desks can be added overnight. The challenge will come when they get to a size where a co-working space no longer makes sense. However, as we move around more co-working environments during our journey, we’ll find out if they can be home as a company moves beyond a small stature.