The doors of the new Tottenham Hotspur stadium aren’t set to open until August 2018, but Real Business received an early look at the future White Hart Lane via virtual reality. 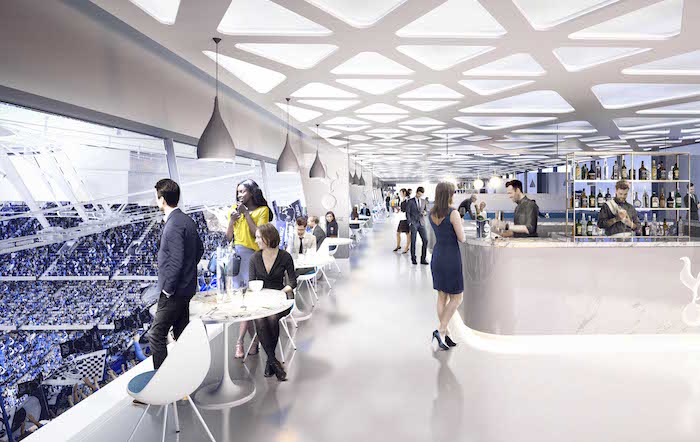 The Sky Lounge will be found on the ninth floor of the new Tottenham Hotspur stadium, costing guests from £195 per person per event for access to the views in and out of the stadium

As mentioned in our previous piece, we were invited to the football club’s HQ to meet with the directors – a meeting which provided us insight on the economic and social impact the new Tottenham Hotspur stadium will have on completion.

The transformation the venue is undergoing is set to create “London’s most unique sports and entertainment destination,” as capacity will grow from 35,000 to 61,000.

In addition to football, a host of NFL games and concerts will take place there too. And with various packages and prices available, the vision for the new Tottenham Hotspur stadium is to produce “a better stadium for everyone”.

We were taken into the club’s virtual reality lab, which has been designed to showcase just how refined the new Tottenham Hotspur stadium will be, and also onto the construction site around White Hart Lane where work is currently taking place.

Check out the video below for an inside look the site’s current progress.

During the interview, it was revealed that affordable premium packages are available for SMEs and corporate bosses alike, but for those with an appetite for the Business Class, we’ve highlighted the three most lavish options on the next page.

The H Club is a members-only haven set to come equipped with dining environments of the Michelin star variety. 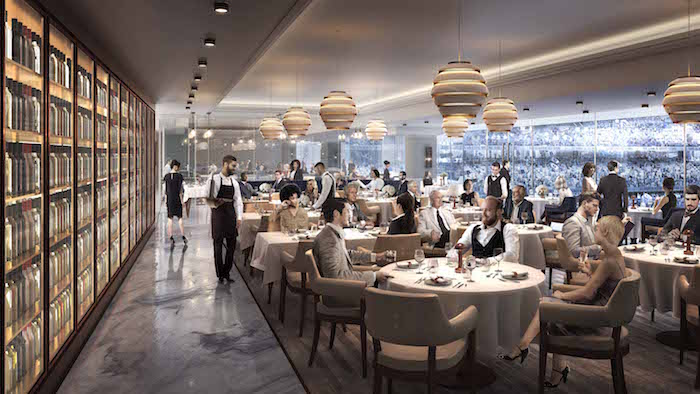 For those who fancy taking things up a gear, foodies will appreciate tucking into their gourmet grub at the chef’s table, while football-mad guests will probably want to opt for seats on a table with former Tottenham Hotspur players.

The Luminaire Bar will provide complimentary drinks to loosen up any guests ahead of important meetings or tense games. And for those with treasured beverages of their own, vintage wines and liquors can be stashed in a personal vault. 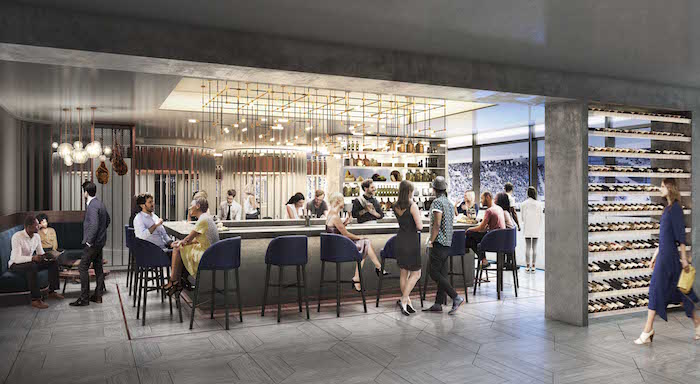 Price: From £535 per person per event, excluding VAT and membership fee. Memberships are only available as pairs at a total cost of £30,000, which is a one-off payment that doesn’t include cost of seats.

Check out the next page for details on getting up close and personal with the team at the new Tottenham Hotspur stadium.

The new Tottenham Hotspur stadium will come with the Tunnel Club. This will allow you to get as up close and personal with the team as possible, viewing into the players’ tunnel while separated with nothing more than a pane of glass. 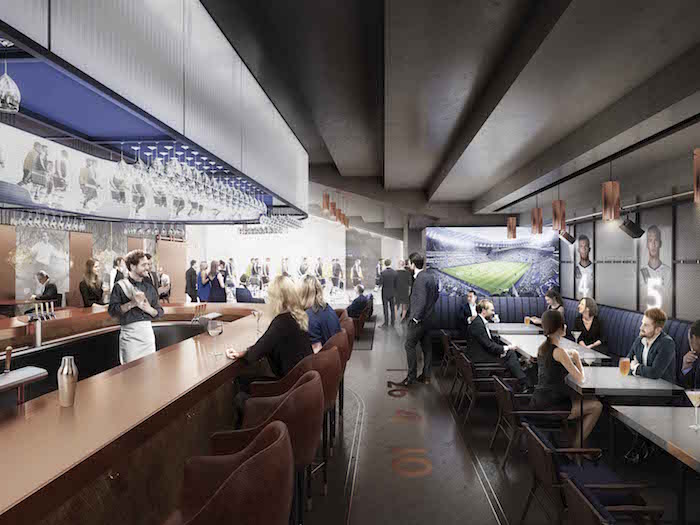 Just 100 people can access the Tunnel Club at a time

“When we looked at NFL stadia, the Tunnel Club was such a major feature of their stadia, it was just a no-brainer that we would be putting one in,” she said.

“They have tunnel clubs where people never see the light of day. They are actually below the pitch and sometimes they won’t come up to their seat.”

The reason for that is the exclusive environment that the Tunnel Club provides. The one at the new Tottenham Hotspur stadium will hold just 100 guests, while it will come complete with access to a bar and huge screens on which the game can be watched. 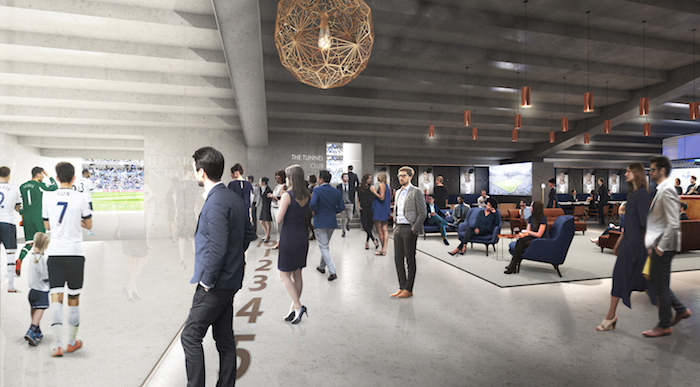 The launch is a first for the UK

Alternatively, they can get some fresh air with the player-standard Recaro seats situated behind the team. The launch will mark a first for the UK.

Price: From £339 per person per event, excluding VAT and membership fee. Memberships are only available as pairs at a total cost of £19,000, which is a one-off payment that doesn’t include cost of seats.

On the next page, find out how the Private Suites will support intimate private groups of up to 21 – on game days and non-game days alike.

For Business Class seekers, another key prestigious development at the new Tottenham Hotspur stadium is the introduction of customisable private suites. 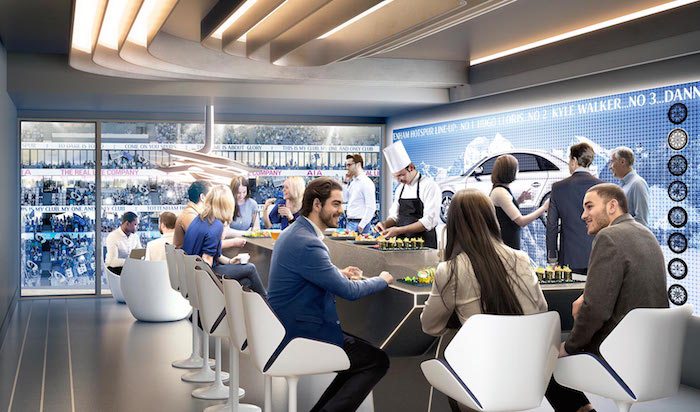 In total there are 65 suites being developed, all of which are bespoke, Andy O’Sullivan, director of hospitality, said. He noted that it’s fewer than the 100-200 seen at some clubs, but there’s a reason for that.

“For suites, we feel the future should be very interactive – so quite a bit more fun, than traditional. That means things like chefs cooking in front of you,” he said.

Super Suites can accommodate up to 21 guests and are situated along the halfway line for a broad view of the pitch. An interior design service will allow customers to have bespoke branding or personal tastes met to set the scene and leave an impact. 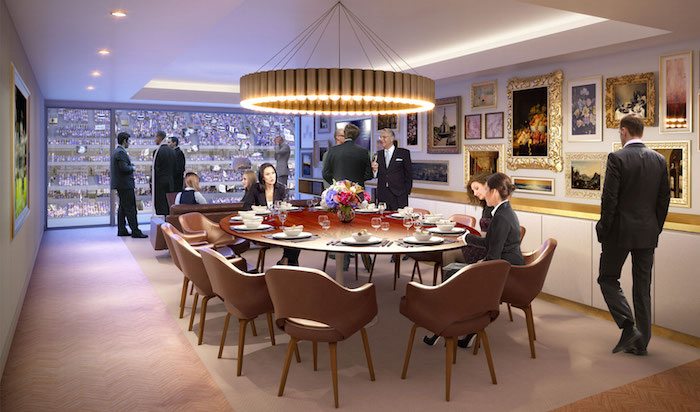 Additionally, the areas can also be used on non-game days, acting as a personal office or presentation venue, with total connectivity available.

Elsewhere, the Sideline Suites can also be tailored accordingly, supporting formal and relaxed affairs in the same way as Super Suites, but with a smaller capacity of just 12 people.

Price: From £320 per person per event, excluding VAT

While the venue doesn’t open until next year, bookings at the venue can now be made.