Skip to content
HR & Management
Share via
Despite being charged with making sure others are enjoying work, HR professionals take an average of 3.1 sick days per annum because of personal unhappiness. The findings, revealed by Service Partner ONE, brought together the responses of 1,000 people across 17 sectors – analysing the amount of both sick days and so-called “duvet days”. The average worker, it was revealed, takes 2.8 sick days a year – with 1.5 of those put down to being unhappy at work and feeling the need for time off. Incidentally, lower earners take less sick days. Those earning £25,000 or less take an average of 1.1 days off because of unhappiness. Service Partner ONE concluded the average British worker loses 70 working days a year because of unproductiveness, which works out as £2.2bn in losses for the UK economy each day. Looking at how productivity can be improved, Sven Hock, co-founder and CEO of Service Partner ONE, commented: “Investing in your office workspace really does payoff when it comes to increased employee happiness and productivity. “Not only do people prioritise working in a happy office environment over extra holiday days, but by providing a little extra as standard such as fruit, snacks and beverages, you can dramatically increase your workforce’s productivity and output.” With those on lower salaries seemingly happier at work, workers with incomes of between £65,000 and £75,000 are most likely to take a sick day because of being unhappy. Furthermore, companies with more than 500 staff house the most unhappy workers, with 27 per cent indicating this is their mood. In 2015, Real Business revealed some of the worst sick day excuses that had been used around the UK. Excuses including “I don’t have the bus fare to get to work after my night out”, “I went on a sunbed and got sunstroke”, “Man Utd lost the premiership” and “I have a cotton bud stuck in my ear” were all used as sick day explanations. 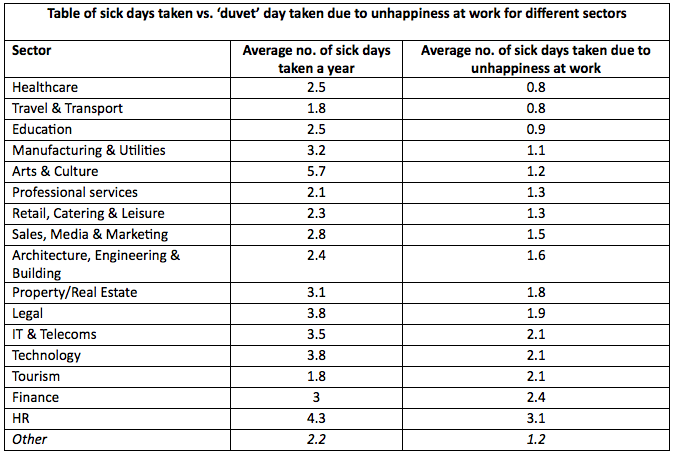