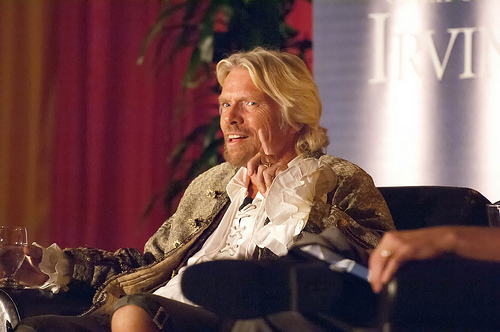 Whether it is the Establishment’s tick in the box of a knighthood or, for example, that survey in 2012, which voted him Britain’s greatest entrepreneur in the first 60 years of our Queen’s reign, his deification continues. Could it be that his spell is finally about to be broken after his latest and highest profile disaster in the Mojave Desert?

If you subscribe to the view that a leopard doesn’t change his spots then the fact that one of Branson’s earliest business enterprises ended up with him being thrown into jail for defrauding Customs & Excise was a worrying signal. This was a scheme to avoid paying tax on Virgin’s merchandise by pretending to export record albums while actually selling them in the UK. Luckily for him his mother posted bail and he ended up negotiating a successful settlement of some £700,000 to avoid prosecution. Until perhaps the other day, that was the low point for Branson. His first big break was the signing of Mike Oldfield to his record label who went on to record the gold mine that Tubular Bells became.  Along the way Branson has understandably hired and fired many senior employees. Some probably thought they deserved better but one was very high profile and died in tragic circumstances. Trevor Abbott had been his finance director for ten years and in 1997, just over a year after leaving Virgin, he was found hanging from a tree. This was how the Daily Mail reported the inquest: “Two weeks before Christmas last year, the 47-year-old father of five filmed an eight-minute suicide note using the family camcorder. Some time later he was found hanging from a tree in a woodland near the £1m Abbott home in rural Surrey. The contents of the video were to remain outside the public domain, the coroner later decided. It was clear that Abbott had fully intended to end his life.  Conservative in habit and appearance, meticulous of detail and a tough negotiator in business, Abbott had long been the necessary counterweight at Virgin to Branson’s ‘gut instinct’ and jumper-clad photo-opportunism. Indeed, as group managing director, Abbott had effectively run the empire on a day-to-day basis since the late 80s. More than once his sagacity had steered Virgin from the financial abyss that was threatened, some argue, by Bran-son’s idiosyncratic approach”. Tom Bower’s 2000 biography of Branson observed: “Critics and admirer’s alike agreed that the Virgin Empire owed an incalculable debt to a sadly desperate man. Even Branson had acknowledged Abbott’s indispensability. The Keeper of the Secrets had secured a substantial stake in the offshore trusts. But in the months before his death, Abbott had been unable to persuade Branson to buy his shares for cash. As Abbott’s business ventures faltered, Branson continued to reject his pleas for money.  “Like so many that thrive in the company of a tycoon, Abbott had discovered he lacked five essential qualities to emulate his former employer: ruthless energy, egoism, skill, instinct and, above all, a compelling performance. Over previous months, he had also discovered his lack of leverage over Branson. Abbott might know secrets but he would fear embarrassment, so remained silent. To buccaneers, men without leverage are not entitled to loyalty”. In 2013 the combative Tom Bower came back with an updated biography. Being something of a petrolhead, I was fascinated by Bower’s account of Branson’s involvement with Formula 1. In the depths of the financial recession Branson had very astutely managed to sponsor the Brawn GP team who, in a story worthy of Hollywood, went onto win the World Championship. Unfortunately for Branson the costs of running a team for the next season reverted to norm. Brawn went off to Mercedes and Bernie Ecclestone, realising Branson’s reluctance to fully finance his own team’s 2010 year, saw weakness as the FI circus commenced battle in Bahrain. Bower again: “After forty minutes he (Ecclestone) saw Virgin’s cars pull out. “A nickel-and-dime operation” Ecclestone jeered”…Shit or get off the pot” Ecclestone told Branson as they passed in the paddock.” But the real centre of interest for the media, in reviewing Bower’s latest biography, was his account of Branson’s efforts to get paying tourists into space. The exciting sounding Virgin Galactic was born and so far circa 700 individuals (including the likes of Brad Pitt and Justin Bieber) have put down $80m in seat deposits. Bower pointed out that nothing much had gone according to plan, not least of all the horrific death of three engineers during rocket engine testing in 2007.  Last week the grim reaper claimed another victim as Galactic’s SpaceShipTwo blew up on a test flight. The Sunday Telegraph reports that the vice-president in charge of propulsion, the vice-president in charge of safety, and the chief aerodynamics engineer- had all quit Virgin Galactic in the last few months. Carolynne Campbell, the lead expert on rocket propulsion at the International Association for the Advancement of Space Safety said “ This explosion is not a surprise. None whatsoever, I am sorry to say. It is exactly what I was expecting. It was Russian roulette which test flight blew up”. Something tells me that if that 2012 survey of Britain’s greatest entrepreneur was run again today Branson would not be coming in at number one. Surely the time has come for him to quit the public spotlight, confine himself to his island of Necker (being fond of a joke he could always rename it Brass Necker), thus leaving the young and impressionable to focus their attention on some new British “hero”? Image source