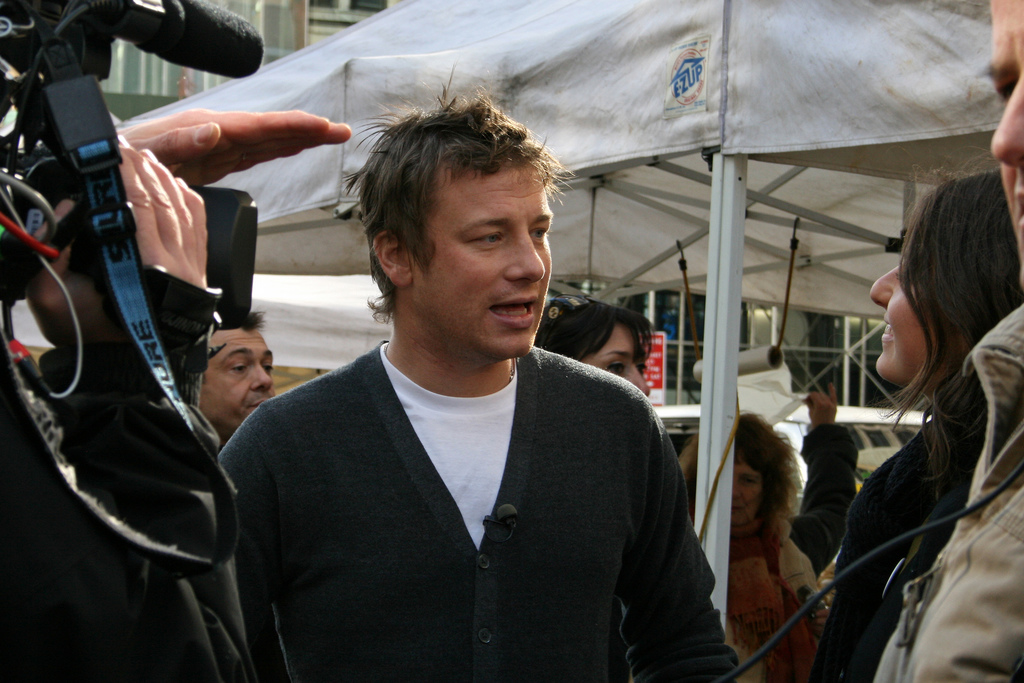 Jamie Oliver is lucky he hasn’t been lynched. I suspect fame brings its own security guards. That said, like him or loathe him, you have to admire a man who single handedly changed the approach to food in British schools, fighting the government on the way.

He was in trouble in the news recently for not just his usual complaints about British poorer families wasting money on convenience foods, but also claiming that many have bigger TVs than his own and are happy to get drunk down the pub while on the poverty line. Yesterday he was at the centre of another storm of controversy after slamming young British workers in comparison to EU ones. He took a pop at the EU regulation of 48 hours saying it is half a day’s work for him and claimed that the European immigrants he employs are stronger and tougher.  He went on to say that his restaurants would close if there were only British to staff there, describing the average British youth as “wet behind the ears”. Generalisations are dangerous things – of course there are some very good young British workers. There are also cultural not to mention linguistic problems with some EU staff.  There is also a shocking number of the type Jamie describes. I too have had the mothers who have rung to complain of their big, butch children being tired from hard work. I have plenty of staff who ensure they are never available for a 48 hour week. I am inundated by the applicants who think it is not worth their while to work. I have seen people who cut their working hours rather than lose benefits – and a system that allows them to do so. The British have produced at least a section of a generation imbued with a “we are owed” culture. Respect for hard work, pride in achievement, aiming to do right by family – all have been replaced by a bitter desire to screw the system and or the employer. We are indeed producing generations of wet behind the ears, as likely to sue you as work. The EU – and indeed immigrants from outside the EU – communities arrive wanting to work, wanting to make a life for themselves and their families. There lies the basic difference. Not surprisingly, the Brits resent the immigrants for “taking their jobs” – not least because they give employers a choice to employ people with a work ethic. During the last few weeks, Real Business has published some excellent and highly researched articles on the value of immigrant workers and entrepreneurs, producing some sound academic arguments. I am sure they are right. Sadly, I am also sure that Jamie Oliver is right – increasing numbers of British businesses would close up without the EU workers. Image source Jan Cavelle is the founder of the Jan Cavelle Furniture Company. Related: Apprenticeships are key to getting the British workforce moving