It is the moment of being told “no”, seeing dreams scuppered by an unconvinced investor or the initial failure of an idea that can prove to be the catalyst for change and maturity in an SME’s journey.

This week, the British Business Bank launched its annual campaign to empower SME bosses to Reject Rejection and arm themselves with the information to explore a range of finance options available to them – so a “no” doesn’t have to mean a business dead-end. Here we run through 10 of the best success stories that nearly weren’t.

Now one of the best-selling music artists of all time, the then-Katheryn Elizabeth Hudson faced “no” after “no” at the start of her career. The first record label she signed with folded, so she adopted the stage name Katy Perry and got signed again, only to be dropped, signed and dropped again.

Her response was to find a record label that worked for her, release I kissed a Girl the following year, and go on to sell more than 40 million albums globally.

An engineering icon? Yep. The best of British entrepreneurialism? You betcha. A failure 5,126 times over? Well… According to the man himself, it took 5,127vacuum cleaner prototypes to get it right. His journey shows that failure isn’t optional – rather, it’s a pathway to bettering your offer.

Jobs faced rejection from the very company he helped create. In one of the greatest examples of twisting fate to your favour, his drive for innovation meant that when he was ousted from Apple in 1985, he funnelled his resources into new ventures. One of these new companies merged with Apple in 1997 (conversely, another became a little-known company called Pixar), and Jobs swooped back in.

He quickly rose to CEO and transformed Apple from the edge of bankruptcy to annual revenue of $108 billion at the time of his death in 2011.

It took five years and six rejections for Christie to find a publisher for her first novel. Fortunately for the literary world, she didn’t let the set-backs get to her and the book was published in America in 1920, following in the UK within a year. In the succeeding century, her books have sold more than a billion copies in the English language and the same again in translation.

With approximately 50,000 customers, more than £1 billion of assets under management and successive funding rounds worth tens of millions of pounds, Nutmeg is one of the fastest-growing wealth management companies in the UK. However, it wasn’t all plain sailing.

Following the company’s launch in 2010, Hungerford met with a range of tech investors in Silicon Valley. It took talks with not one, two, or even 20 investors to get backing. In fact, it was the 46th meeting that finally provided the goods.

Making its TV debut more than a decade ago to widespread acclaim, it’s hard to imagine how one of the most successful series of all times was overlooked by TV networks seeking breakout content. It was fourth time lucky for Breaking Bad’s writers, after three separate networks rejected Walter White and his life of crime.

The entrepreneur behind the world’s most famous fried chicken franchise was 50 when he founded his first chicken stand. At the whim of local traffic, Colonel Sanders’ enterprise initially failed until he took it on the road, eventually securing his first official KFC outlet 13 years later in Salt Lake City, Utah. Proof that a can-do attitude and passion for crispy chicken can override obstacles.

8. Kathryn Minshew, CEO of The Muse

As the founder of The Muse told CFP Bobbi Rebell on the podcast Financial Grownup, rounds of seed funding can take their toll on entrepreneurs. It certainly takes a special kind of motivation to carry on following 148 rejections from investors. But with $30 million now raised, Minshew understands more than most the value of finding the right investors.

Children and adults the world over have heard of Disney. But what about “Iwerks-Disney Commercial Artists’”? Disney’s first animation studio was quickly abandoned when financial woes and other employment opportunities arose. He later co-founded Laugh-O-Grams, but the company again went bankrupt.

It took a move to Hollywood, another decade of hard work and the help of Mickey Mouse for Walt Disney to find success (and his first Academy Award). A true fairy-tale.

Bezos wrote to shareholders in 2015 to remind them of Amazon’s humble beginnings: “I believe we are the best place in the world to fail – we have plenty of practice!”.

When founding the online retailer, every investors’ first question was reportedly “what’s the internet?”, and Bezos now admits his venture almost didn’t take off as result. No wonder he reminded investors over two decades later that “failure and invention are inseparable twins”. Food for thought indeed.

When looking for finance as a small business, hearing a “no” from a potential investor can be tough. But a rejection does not have to mean the end. There are a wide range of finance options available to small businesses across the UK, both as traditional and alternative forms of finance.

The British Business Bank understands the pressures that small business owners are under and the importance of simple, impartial information. That’s why it has launched a new information hub for ambitious smaller businesses, alongside the existing Business Finance Guide, to help SMEs at every growth stage identify what the right finance options are. 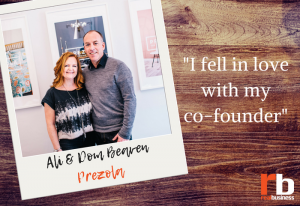