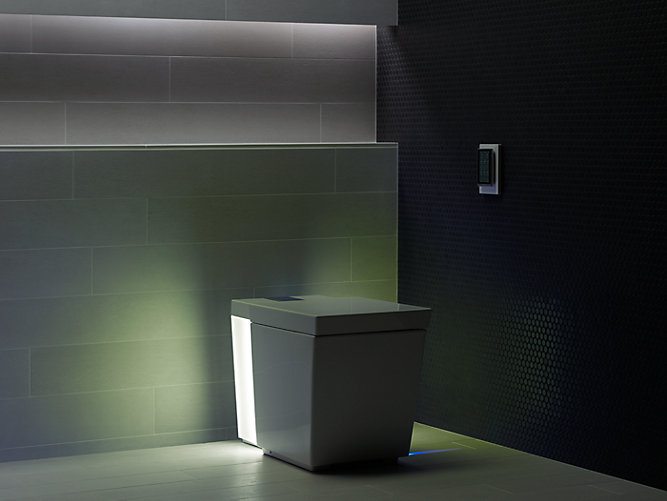 Share via
It may not be the first thing you think of in terms of corporate gifts, but you never know when having a toilet up your sleeve will come in handy especially if it’s the K-3901 Numi. From its name alone it leaves no doubt that technology is part of the toilet’s offering K-3901 Numi sounds like an android Star Wars forgot to give mention to. According to the site, this Numi product uses technology to bring you ?personalised settings that let you fine-tune every option to your exact preferences, from ambient coloured lighting to the heated seat and foot warmer?. When the company says ambient lighting, it really means you could have a small disco in your bathroom if it were big enough. It even has wireless Bluetooth music synchronisation capability, allowing one lucky owner to store MP3 files to an SD card or plug in a device of choice using the attached auxiliary cable. There’s thus a reason why it’s been dubbed a toilet fit for a king. And according to the Daily Mail, the company’s description of the toilet that it has a ‘striking form and features to its unrivalled water efficiency” is probably not wrong. Daily Mail went into greater detail on the K-3901 Numi, saying: “There’s no danger of chilly cheeks when you sit on it because the motion-activated seat is heated. Your feet are kept toasty, too, by vents that gently blow hot air on them. “The spec also includes a charcoal-filtered deodoriser, built-in bidet, illuminated side panels and speakers with MP3 input sockets. Users won’t even need to go to the trouble of choosing their own music the toilet will play pre-programmed music or radio broadcasts.

Sadly, the K-3901 Numi is only the world’s second most expensive toilet that title belongs to one made by Hang Fung Gold Technology. As is alluded to in the company’s name, its toilets are made of 24-carat solid gold. It retails at a whopping $37m, one of the reasons we decided to go for the android version no one should cough up that much money for someone else’s bathroom. But here me out, as strange as the gift may sound, there may come a time when your client is in desperate need of one. Things break all the time after all. I discovered just this morning that my toilet was coming unstuck from the wall” Now if only someone would offer to replace it with a K-3901 Numi. If you’ve ever been lucky enough to have a client tell you about such a circumstance, the fact that you’re offering to buy a toilet in their stead should make them incredibly happy and will tell them how well you’ve been listening to the conversation. See Handy to randomly know where to turn to when your favourite client complains about a broken toilet.