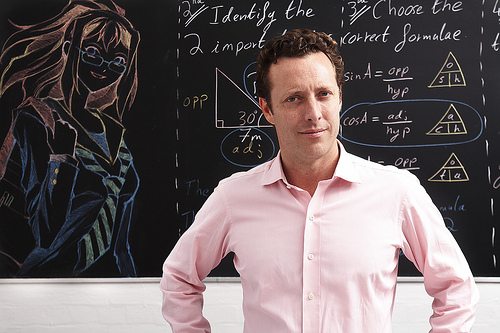 Rowland started King.com with Riccardo Zacconi in 2003 and refers to it as the “female Party Poker”. Players compete against each other in short tournaments and games, including classics such as Tetris, Sudoko or Solitaire but also games based on TV shows like Who wants to be a Millionaire and Deal or No Deal. But they don’t play for money (the average stake is only 35p), they play for mental stimulation.

“There was nothing of this kind existing in Europe in the early noughties,” says 40-year-old Rowland. King.com makes money in three ways: subscriptions; advertising; and by taking a 25 per cent commission on its pay-to-enter games. Within three years, it was pulling in sales of £13m. Rowland partially exited the business in 2005, selling shares to private equity firm Apax Partners in a deal worth £22m. I?m an incurable entrepreneur. I love coming up with new ideas,” he says. He decided to apply some of the same principles behind King.com to the education sector, setting up Blue Duck Education (trading as Mangahigh.com) in 2008. I wanted to make learning fun,” he explains. Instead of “force-feeding” dry maths content with textbooks, Mangahigh entices students with unique, curriculum-compliant maths casual games. It’s the same model as King.com but without the cash bets!” The site went live in January this year and Rowland says 25 schools are signing up daily. Teachers pay a small subscription fee (£5 per student, per year) to monitor their students’ progress. Rowland reckons his model has global appeal. “There are more than a million schools in India and 25,000 schools in the US,” he says. The company’s biggest cost is producing the games (each one costs between £30,000-£40,000), which are designed by a team of tech wizards and expert maths educators. There are currently seven games up and running on Mangahigh.com and Rowland says the company aims to make a new one every two months. “I expect the company to be in the black next year,” he adds. Is this the best form of education for children or will it encourage computer addiction?