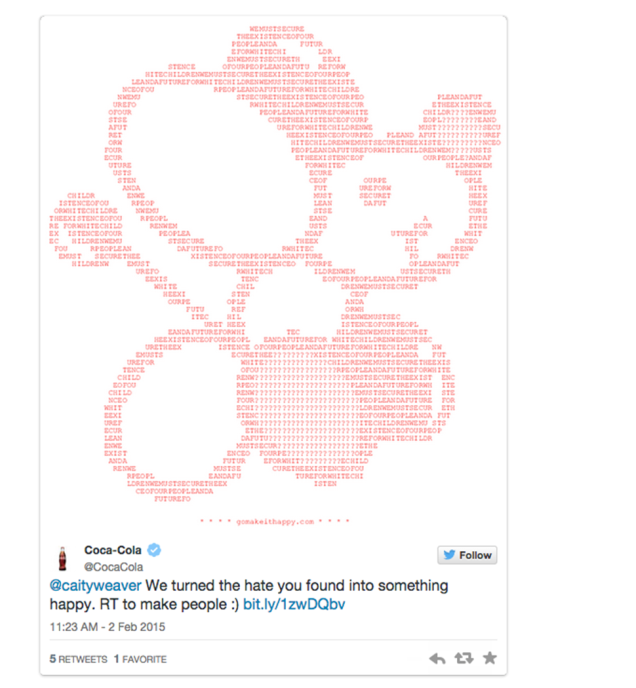 In Coca-Cola’s most recent Twitter campaign, the company developed an algorithm that would convert tweets into ASCII pictures of happy things when someone used the hashtag #MakeItHappy.

The aim behind the project was to “tackle the pervasive negativity polluting social media feeds and comment threads across the internet”. But media company Gawker set about creating a counter-campaign. The editorial labs director, Adam Pash, created a Twitter bot with the handle @MeinCoke. The handle would tweet lines from Mein Kampf. It was then linked to the #MakeItHappy tag. This essentially “tricked” Cola’s own Twitter account into featuring them on the site. Parts of the text would feature alongside pictures of palm tree wearing sunglasses, for example. The adorable mouse image spells the words: “We must secure the existence of our people and a future for White Children.” And the unsuspecting smiley face? “German-Austria must be restored to the great German Motherland. And not indeed on any grounds of economic calculation whatsoever.”

The last post to make it onto Cola’s account before the campaign was cut short were the words: “My father was a civil servant who fulfilled his duty very conscientiously.” This was in the shape of a pirate sip wearing an eyepatch. “The #MakeItHappy message is simple: the internet is what we make it, and we hoped to inspire people to make it a more positive place,” a spokesperson said. “It’s unfortunate that Gawker is trying to turn this campaign into something that it isn’t. “Building a bot that attempts to spread hate through #MakeItHappy is a perfect example of the pervasive online negativity Coca-Cola wanted to address with this campaign.” This prompted Twitter chief executive Dick Costolo to send an internal memo to staff. “We suck at dealing with abuse and trolls on the platform and we’ve sucked at it for years,” it read. “I’m frankly ashamed of how poorly we’ve dealt with this issue during my tenure as CEO. It’s absurd. There’s no excuse for it. I take full responsibility for not being more aggressive on this front. It’s nobody else’s fault but mine, and it’s embarrassing. “We’re going to start kicking these people off right and left and making sure that when they issue their ridiculous attacks, nobody hears them.” By Shané Schutte