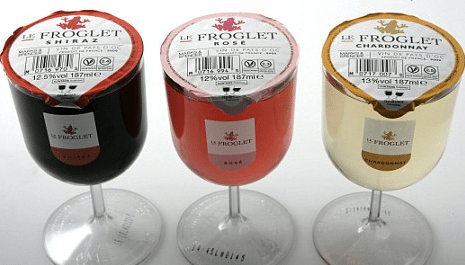 Share via
There aren?t many instances where the Dragons? Den panel gets it wrong. Rob Law?s Trunki ? the kids? luggage business ? is one major example that we?ve written about. But it looks like we?ve found another: James Nash?s Le Froglet wine glasses. Entrepreneur James Nash?s invention ? a single-serve plastic glass of French wine with a tear-off lid ? has just started being stocked by Marks & Spencer, but the chain is already struggling to keep up with demand. ?They?re proving popular with people who want to perhaps enjoy the summer with a glass of wine in the park as part of an impromptu picnic, either after work or for a relaxing lunch,? explains an M&S spokesperson. ?They?re also popular with commuters who want to enjoy a drink on the train home from work to wind down. We?ve found they?re very popular in locations popular with tourists.? When James Nash presented his ?cup-a-wine? concept to the Dragons, they weren?t impressed. James Nash offered a 25 per cent stake in the business in exchange for ?250,000, but none were interested. ?People don?t want to buy wine in plastic glasses like that with a seal on top,? said Duncan Bannatyne. How wrong he was. The ?2.25, 187ml Shiraz, Rose and Chardonnay wine glasses have been flying off the shelves. ?It was disheartening to be dismissed by all the Dragons,? James Nash told the Daily Mail. ?But I knew I had a great concept which wold work in outdoor events, BBQs, picnics, concernts, and I wouldn?t give up. ?I?m really looking forward to facin the Dragons again as ?the one that got away?. Hopefully sales of the product will show that they?re not always right.” James Nash’s success is certainly giving the Dragons food for thought, although it remains to be seen whether consumers are just intrigued by the new glass format or if they actually like the wine. Wine-connoisseurs certainly aren?t convinced about the quality of the wine. One wine blogger?wrote:??It was horrendous. Not balanced at all. Very rough on the palate, not helped by the (abrasive) glass. I took a couple of sips and threw it down the sink. It is hands down the worst ever glass of wine I have ever drunk.? If any readers try Le Froglet and have any views, please let us know what you think of it by leaving a comment below. Related Article: 31 Dover