Since the huge market sell-off of tech companies earlier this year, Snap – the company behind Snapchat – has joined the rollercoaster ride of tech giant share prices.

In one day in August, Snap Inc fell four per cent, before rebounding by six per cent within 24 hours. So, what can we learn from tech share prices investments?

Part of the issue with tech stocks is the anticipation and hype that tends to surround them at the time of their IPO, which can result in a huge price tag on the stock. When hype meets the reality of market forces however, tech share prices can suddenly look over-valued and the stock comes tumbling down.

Snap was given a whopping $17bn price tag when it floated – a hefty valuation for a business that has yet to turn a profit. That was swiftly followed by two bad quarters of results, causing a some 40 per cent drop in stock price by August.

Any company with an expensive valuation that fails to beat forecasts is going to struggle, especially as questions loom over the monetisation of the business.

Facebook is another prime example. It had an awful run after its IPO, with shares practically halving in value. Now, of course, its shares are trading over 300 per cent higher than the IPO price, proving that as long as investors have the stomach for volatility, and with a bit of luck, shareholders can win big.

Why is the tech sector so volatile?

One way to consider the tech sector is as two distinct groups – the newbies, such as Netflix, Facebook and Snap, and the old guard – Apple, Microsoft and Google. The latter have been around the block a few times, and report fairly predictable earnings. They also have a proven track record of fending off competition and remaining at the top of their respective games.

The newbies meanwhile, are equally recognisable brands, but are far more prone to volatility, a result of a number of factors, including their valuations, profitability, shifting trends, and incumbent and new competition.

In some cases, notably Facebook, we’re seeing the newbies all-powerful brand awareness being translated directly into impressive earnings. But not all brands have the clout or penetration of Facebook, and yet their stocks don’t come any cheaper.

In most cases, with newbie tech share prices, what you’re essentially paying for is exponential growth of future earnings. That why, when these expensive stocks don’t deliver the expected returns, jittery investors can be tempted to quickly dump them, leading to a stock sell-off. Indeed, this could be what is happening now with Snap.

Competition in these fast-moving sectors is impossible to predict. Many tech companies have little or zero competition at the outset, leaving their future earnings unchallenged.

But, particularly in markets with relatively low barriers to entry, rivals can come from seemingly nowhere, and quickly steal market share. And when there’s money to be made, inevitably they will come.

Netflix is a case in point, enjoying dominance of the TV on-demand market for years, but now under strong pressure from the likes of Amazon’s Prime service, Disney’s new offering, set to go live 2019, and not forgetting the traditional broadcasters’ on-demand services.

As these markets mature, perhaps we’ll see this area of tech become calmer. Then again, it’s debatable whether markets so dependent on shifting trends in consumer behaviour, lifestyle and technology can ever be considered stable.

Is there a bubble?

It’s not unreasonable to look at current markets and draw the conclusion that there’s a tech bubble, but doing so ignores the wider picture. Stock prices and asset classes across many markets are following a similar suit at the moment, partly due to the ultra-loose monetary policies being followed by global central banks since the recession of 07/08.

Why? Because when cash savings returns are next to nothing, people buy other asset classes, which pushes up their value.

There’s no denying that investing in tech companies is trendy. But businesses like Uber, Airbnb, or even Wealthify, are also attractive investments because of the innovation we bring to mature markets in terms of scalability, low cost to consumers, and easy access to services via apps and online.

Not all startups will thrive, but with the right support and access to expertise, many do go on to become the household names that we can’t live without.

If your favourite tech stock is up ten, 20 or even 100 per cent in a short space of time, wait and buy the dips. Stocks rarely go up in a straight line and if you’re patient, your entry price could look a whole lot better.

Similar principles should be applied when adding to your holdings. This technique is known as pound cost averaging.

There may be times when your investments aren’t faring too well relative to other sectors. Remember tech share prices are cyclical so will perform better over certain periods of the market cycle. A typical cycle is around five years so be prepared to wait it out till you start seeing results.

Buy a fund, even better buy a tracker fund. For a tiny fee, you can own all the major global tech companies and reduce time spent on research.

If you aren’t prepared for big potential losses, as well as big gains, maybe tech stocks aren’t for you. If you can’t handle the heat get out of the kitchen.

After selecting your holdings, try to avoid getting sucked into making news stories that the talking heads on TV and investment analysts release. Remember just because they’re professionals it doesn’t mean they’re right all the time. 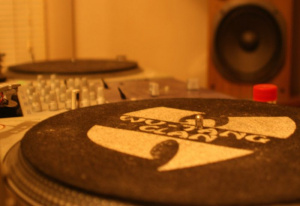 Woof-Tang Clan: Is it parody or infringement?