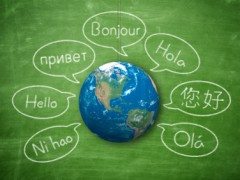 Research has indicated that a key consideration for those wanting to export is language.

A study published in 2012, Found In Translation, suggests that 72.4 per cent of consumers are more likely to buy if provided with information in their own language. Furthermore, over half of respondents said that the ability to obtain information in their own language was more important to them than price. In addition, research undertaken on behalf of Common Sense Advisory from 2011 found that when given a choice of languages, nine out of ten internet users always visited websites in their native languages, while 42 per cent of respondents said they never purchased products and services in other languages. Anecdotally, my own experience concurs. After losing my job in 2004 I was lucky enough to win a contract with IBM France which enabled me to start a business which now has a turnover of over £8m and employs over 40 staff. In the first instance I went for a meeting in Paris and met up with six IBM Executives, delivering PowerPoint and the presentation in French. I was later told quite bluntly by the key decision maker that had I not spoken French I would have not got the business. So why was it so important? Their English was not great and they preferred to communicate in French and we were selling into the French market so they needed to know that I had a good linguistic and cultural understanding of their market. Therefore learning a language was critical in opening up a fantastic opportunity. Moving forward we approached Germany which was my other language, then rolled out further across Europe, Africa, Australia and the US. To facilitate this we launched a sister business, One Global, employing native local language speakers and enabling the core business to approach each market in a culturally sensitive way. In international trade it is vital that you learn to love the travel and appreciate the country you are selling to. Time and again I have heard a minority of British business people be rude to their potential clients by focusing on the less desirable aspects of their target country. There is, of course, the ‘English is the language of business’ approach, but I estimate that making the effort to work in a prospect’s own language improves the likelihood of a successful relationship by up to 40 per cent.  Taking the multi-lingual route has more to it than simply communicating information accurately – it conveys respect. Prospective clients want to know that you value their business, and investing in the services of native experts to facilitate the business relationship demonstrates how much you care.

Jim Hart is CEO of multi-lingual recruitment and translation specialist One Global.