13.34: That’s it, folks. Darling has finished. Thank you for following – full and comprehensive analysis of Darling’s measures will appear on Real Business throughout the day and tomorrow, with particular emphasis on what it means for entrepreneurs.

13.28: Tax avoidance – very loud in the House. Wants to bring more tax in by tax agreements, will bring around £1bn of extra revenue. Also says Gov’t is ready for agreements with three more countries: Dominica, Grenada, Belize. Lots of shouting! “We expect these deals to be signed within a few days, which is quicker than the time it’s taken the gentlemen opposite to exchange information with their deputy chairman [Lord Ashcroft].” Cheers and jeers all around.

13.24: Strengthen link between universities and commercial sector. “We need to keep British talent in this country.” £35m extra funding for university spin-outs and enterprise: “It’s the ambition of young people that will carry this country’s success.”

13.18: “Investment in traditional and new infrastructure vital if economy to grow and businesses succeed.”

13.17: “Tax system should not hold back decisions to invest.” Entrepreneur relief doubled to £2m from £1m over your lifetime.

13.17: Business rates are a fixed cost from the moment a company moves into its premises, so to help fledgling businesses set up, Darling announces to cut business rates for one year from October.

13.16: Small business support – 80 per cent of invoices to public sector will be paid within five days.

13.15: Darling announces launch of “UK Finance for Growth” quango, which will ensure businesses can access finance.

13.14: Announces fast-track credit adjudication service for businesses to see if credit has been wrongly denied.

13.13: Viable businesses must be able to get loans,” he says. Announces RBS and others will provide £94bn new business loans for SMEs next year.

13.12: Says has been working with Mandelson to encourage research, innovation and enterprise. Access to finance is vital to small businesses: “understandable for banks to reduce lending, but banks have to accept obligations to lend more.”

13.11: “No country has more talent. We’ve worked hard to create an environment for ingenuity and entrepreneurial flair,” says Darling. “But we can’t take growth for granted. We can sit back and hope for the best, or recognize the role government can play to act as a launch-pad for businesses to succeed.”

13.10: “The biggest rabbit Darling has pulled from his hat is lower than expected borrowing next year.” – Robert Peston

13.08: Darling says government civil servants in London will be reduced by a third, moved outside of expensive Central London property.

13.07: Pays tribute to the armed forces, says £4bn going to operations in Afghanistan next year.

13.04: But duty on cider to go up by a startling ten per cent above inflation! West Country entrepreneurs will not be happy.

13.04: Duty on beer, wine and spirits will come into effect as expected from midnight on Sunday.

13.03: “Those who have benefited the most from strong income and growth in the past years, should now pay their fair share of tax.”

12.59: “Some demanding immediate cuts to public spending – but it would be both wrong and dangerous. It risks derailing the recovery. To go faster in the face of uncertainty would be taking a huge risk with jobs and the country’s economic future.”

12.55: Better corporation tax receips, better VAT receipts. “These are the results of the deliberate choices we’ve made over the last two years.” Borrowing this year will be £11bn lower at £167bn. In 2011, borrowing will be £163bn.

12.54: Also revises fuel duty – fuel duty will rise by a penny in April followed by a further one penny rise in October and the remainder in January.

12.48: Darling announces working tax credits for older workers, plus looking at scrapping compulsory retirement age, and extend guarantees to get young people into work. “No one under 24 will need to be unemployed for longer than 6 months before undergoing training.”

12.45: Many members of opposition shout at Darling over latest unemployment figures. “The claimant count today is still lower than the number we inherited in 1997. That has not happened by chance, but because of the choices we made. It’s because of the tremendous efforts of businesses and workforces to keep people in jobs.”

12.44: Crisis started in financial sector, but spread to the entire economy. “Businesses in the UK have taken painful decisions, many families have seen their income squeezed,” says Darling.

12.43: As expected, Darling announces that everyone can have a basic bank account. Over the next five years, over 1.5m more people will have access to a bank account.

12.41: Darling says taxpayers shouldn’t be made to foot the bill for banks excessive risk taking.

12.39: Darling says “improved banking regulation must be a priority” – admits the nationalisation of high-street banks was controversial, but was essential for the financial system. Says he intends to get all taxpayers money back. The Treasury has already received £8bn in fees and charges back from the banks in return for support. Says the one-off 50 per cent tax on excessive bonuses of bankers was right for the country, and has raised £2bn, twice as much as forecasted.

12.38: “It’s imperative that EU countries act with renewed energy and vigour to get the European economy growing again.”

12.34: “Government should help people and businesses achieve their ambitions.”

12.33: “This budget takes place as the UK emerges from the deepest recession in over 60 years.”

12.27: And a Tweet from Paul Mason, Newsnight’s economic editor: “Darling has the look of a man about to unleash a ferocious jack russell on a defenceless gerbil.” – @paulmasonnews

12.22: More comments from Twitter: “So, The Budget starts in a minute. I wonder what cunning ways they’ll have of taking yet more of our money to pay for their mistakes?” – @simondolan

12.09: As an aside, there is no need for you to refresh this page during the Budget, it will refresh automatically.

12.04: “I’d like to clear things up. It’s Budget day, and there’s a picket line outside the Treasury. So could the Prime Minister confirm that he would like them to cross the picket-line?” – David Cameron

12.01: Prime Minister’s Questions is about to start. As usual for the Budget day, the room is full.

11.48: Twitter is abuzz with news that Darling is stuck in traffic… let’s hope he doesn’t keep us waiting too long!

11.45: If you’re a betting man, it isn’t too late to bet on Darling’s Budget. The bookies are offering a wide range of bets, from how many sips of water Darling will take (the odds are 1/10 for none, 6/1 for one sip, 8/1 for two sips, etc. on Paddy Power), to who will deliver the next Budget (at odds of 4/11, William Hill thinks George Osbourne will be the next Chancellor, followed by Darling at 8/1 and Vince Cable 10/1). 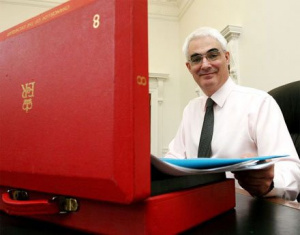 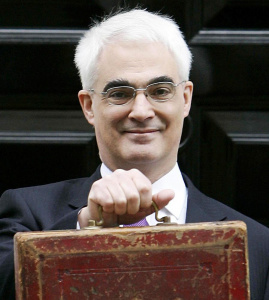