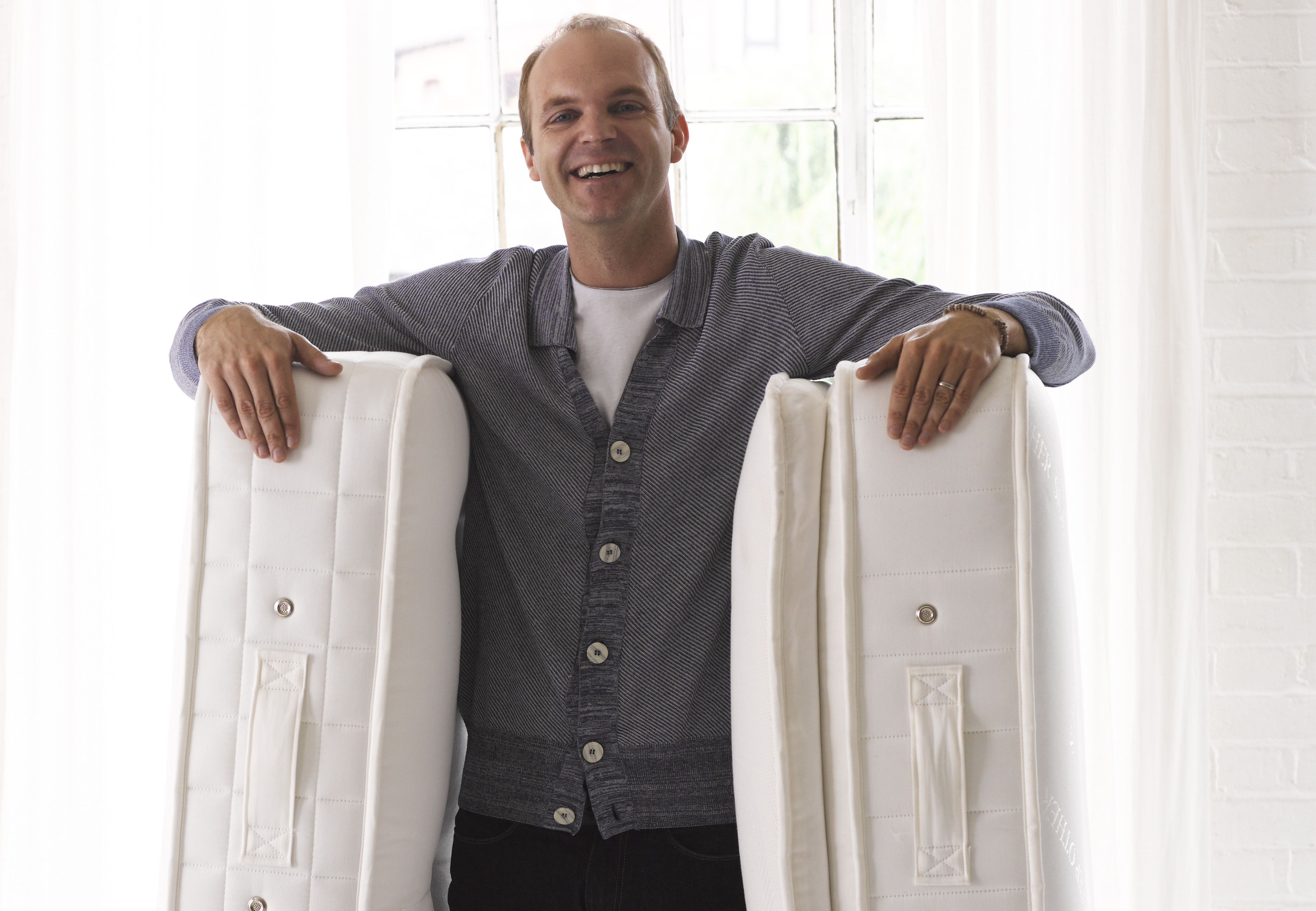 Loaf had its sixth birthday at the turn of the year, an event which was brought to the attention of the public through an advertising campaign that took the brand onto London public transport. With the candles blown out, founder Charlie Marshall is now turning his attention to bringing his quick and easy furniture purchasing approach to physical shopping destinations in the capital.

The business began life in 2008 when Marshall, as with thousands of entrepreneurs before him, became frustrated with a process and decided he could improve it personally. That process was buying a new mattress, and led to the creation of The Sleep Room ? a business offering 12 beds and one mattress, cheaper and quicker. While the company now has a new name, and a lot more product, the concept remains the same. Looking at how the furniture market, particularly the online one, has changed since he started out, Marshall remembers a time when it was all about price. ?It is now more about pushing the brand than ever before. Six years ago there weren?t that many other furniture retailers out there pushing exclusively on a website,? he added. ?A lot of the major retailers had add-on websites, so the opportunity for us then was how we could sell a product faster and cheaper than the high street.? Read more about Charlie Marshall: Despite the environment changing, Marshall is still firm in his opinion that value for money is key for customers ? but great products, service and innovation are also pivotal in developing a ?loved? brand.

When I asked Marshall how closely he pays attention to the market and his competitors he described Loaf as ?an enigma wrapped up in a contradiction?. In essence, this means that he and the team fastidiously concentrate on rivals to see which is doing what, but then pay no attention to it ? ultimately ploughing on as planned (which sounds like your typical ?I know best? entrepreneurs? attitude). While Marshall admits he can have this approach, which determined the kind of products his new and raw business started out with in 2008, he?s learnt how to let customers shape what eventually goes on sale. The new growth push, which will see Marshall and his team open up a number of ?Loaf Shack? shopping destinations, received a shot of adrenalin in January 2014 when the business took on its first major investor. Deciding that venture capital wasn?t for him, ?I didn?t want someone telling us how to do it”, he said, Marshall ending up plumping for an individual who has himself created two prolific retail businesses. ?I went out to the market and put feelers out. It was very small scale, I didn?t want a big auction, but had a lot of people coming to see us,? Marshall recalled. ?During that process I got a call from Peter Simon who said do I want to have a chat. What I loved about Peter was that he?d been on a similar journey to me. Despite being a few years older, and a lot more successful, he?d started in Portobello on a market stall and built his businesses organically.? Those businesses are high street fashion brands Accessorize and Monsoon. Described by Marshall as a bit of an ?unsung hero? in the world of retail, the chemistry between the two was good and Simon invested in Loaf for a significant minority stake.

Loaf now resides in one of the buildings Simon owns, itself in the shadow of Monsoon and Accessorize HQ in Shepherds Bush. ?One of the great things about having him on board is that he is non-invasive. He?s not here to tell me how to do things, but if I need advice.? Simon has helped Marshall secure the services of Nick Schwefel, someone who began his?career as a van driver for Monsoon and Accessorize before working his way up to take charge of outlet rollout. Having helped grow the brand?s store count from five to 145, Schwefel will now be overseeing the opening of Loaf Shacks. The ?natural progression?, as Marshall refers to it as, for any retailer in furniture to have bricks and clicks (shops and online) is fine, but key to success will be ensuring every component ?syncs seamlessly?. He explained: ?We have got three things going on with the business. The first is the website side, which has taken us six years to understand. The next is the brochure side, which has taken three years. And now is time for the bricks part. ?The important thing, when customers face any of these, is making sure each channel refers to the others. If you get a brochure it should be pushing you to visit us, and when you come in it should push you to online.? The Loaf Shack concept Marshall has come up with will not see shops ?decked out with iPads?, rather remaining old school and ensuring the intimate nature of purchasing a bed or sofa is retained. ?I think if we try and bamboozle people with technology we will lose that magic and handholding. So we?ve been training up our staff so they have as good a knowledge of product as I had six years ago when it all started.? Deciding where each Loaf Shack will be is another careful consideration. Flat out admitting that he will be going nowhere else, nationally or abroad, until the company has London licked, Marshall will be using the benefits of customer data derived from online purchases to map out the best spots. He wants to find ?quirky destinations?, big enough to serve as ?brand cathedrals?. ?If we just loaded up on high streets we?d lose some of that magic, and a business like ours is all about holding onto that magic,? he added. Read more about the furniture industry in the UK: Now he?s got a firmly established business, which he believes has moved out of the ?small? stage and into the ?medium? one, Marshall is not having as many sleepless nights as before. Looking back on the mistakes he?s made along the way, of which there have apparently been many, the biggest unsurprisingly involves personnel. ?With hindsight I would have looked to take on board more staff who are better than me sooner ? I was probably a year too slow in doing that. It?s one of the thing I?ve picked up off Peter, it?s all about people.? Since the investment dropped into the bank account at the beginning of 2014, Loaf has doubled in size to its position of a little under 70 employees. Admitting it went against his desire to run things in a ?lean and mean? way, Marshall realises it is now a much calmer and happy environment with greater control.

The last thing we touch upon during our interview is the supply chain side of things, a topic which highlights a little of Marshall?s inner thinking and demonstrates the complex nature of a business like Loaf. Again focusing on people, people, people, Marshall picks suppliers and contractors which are able to grow as his business does and have a similar ethos. Its China side of things is headed up by a designated head of country, acting as a mouthpiece for suppliers. ?One of the main suppliers that gets forgotten is warehousing and distribution,? he believes. ?I used to have my own warehousing and distribution for my soup factory, so know all the pains and challenges of doing that. We got to a point a year and a half ago where we realised, if we are serious about growing to a ?100m business, how will we do that.? He took the decision to find a new distribution partner, eventually selecting one called Wincanton. Explaining it as a ?very nerve-racking change?, Marshall decided to test the market by ordering a huge load of new furniture for his house (from other retailers) and seeing first hand how deliveries were dealt with. The winning pitch was delivered when two delivery men took a bed all the way up to his children?s bedroom on the top floor, fully assembled it, and then did the opposite after the ?problematic customer? in Marshall decided it wasn?t the right product. Conducting the whole process in a polite and efficient way convinced him the distributor was the right one to go for. Marshalls ?100m plan is one he’s confident about achieving, but noted that there will likely be lots of new “twists and turns” ? just like the last six years. Annual sales reached ?20m for 2013/2014, and the company was named the UK’s 52nd fastest growing in Fast Track 100 2014. It was also picked by Real Business as one of the ten businesses we believe came of age during 2014. “Any good business is about reacting to situations and giving a good account,” he explained. “Right now it feels like the plan is the right one, but things can change ? new competitors can come into play.” What’s really exciting Marshall is getting his first Loaf Shack opened up, after which he’ll be able to get a greater feel of the revenue each one will bring in. Until then it is all a bit of “hot air”, so he’s “chomping at the bit” to sign the maiden lease. By Hunter Ruthven