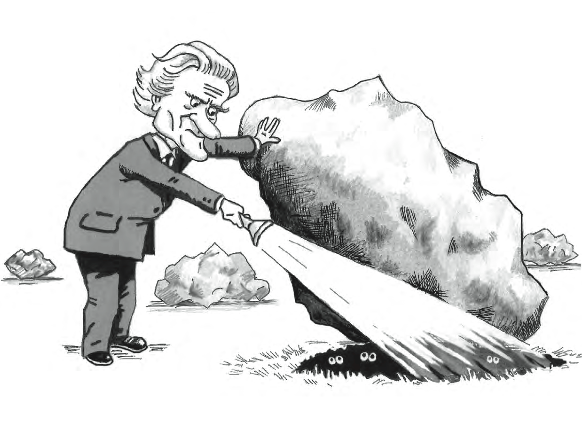 Do you agree with Lord Michael Heseltine’s view that “big government does not work”? In his independent report, “No Stone Unturned in Pursuit of Growth“, released last Thursday, Heseltine suggested a radical long-term structural change to the way Britain does business, a comprehensive economic plan that makes a strong case for the devolution of the central government to local bodies.

The former deputy prime minister put forward 89 recommendations which aim to inject stability into the economy, create the conditions for growth and maximise the performance of the UK. At the heart of the proposals are measures to unleash the potential of local economies and leaders and enable every part of the UK economy to raise its game.  “We should not look at SMEs, or mid-sized business, or large business in isolation. They are closely interconnected,” says Lord Helestine in his findings. The major rebalance will move responsibilities concerning Britain’s economic development away from Whitehall and allow local governments to focus on the specific needs of their community. “Our ability to create wealth has suffered. Each day more and more of the leading economies are enhancing their skills, adding to their strengths and grasping larger shares of the world’s wealth. We need to strain every sinew to get back up there with the world’s best.” Heseltine urged the government to build on what it is already doing, but “shrink, simplify and improve on his recommendations. The recommendations to drive industry include : Paul Carter, leader of Kent County Council, commented: “Lord Heseltine is completely right to stress the importance of infrastructure as the foundation of economic growth. The fact is, it takes far too long to get public infrastructure built in this country.  “Whitehall needs to free up and empower local government to take the right decisions alongside local business leaders to boost the economy and create jobs…With the right funding and powers, local government can lead the way in driving forward the infrastructure projects we desperately need to set light to the national economy.”

Lord Heseltine admits his report could be hard to swallow for hardline Tory Thatcherites. The chancellor, George Osborne, may too have trouble accepting all the recommendations. “I have not left the government with easy decisions,” said the former deputy prime minister. “Some may paint my report as a set of criticisms – that is the wrong approach. To invite criticism is a sign of strength. What I have proposed is an opportunity on a grand scale.” Will any of Heseltine’s recommendations be implemented by Osborne and the Coalition? Shadow Business Innovation and Skills minister, Chuka Umunna believes it to be unlikely: “I think it’s fair to say that the majority, almost all of the parliamentary Conservatives in the party right now, are very much in the Thatcher mould when it comes to their thinking around economics. So I think this is likely to be kicked into the long grass.” Recent research, commissioned by Sage and MindMetre , reveals SMEs lack confidence in the government and believe their local MPs to be ineffective. David Cameron needs to take charge and align politics with local action to allow Britain to destroy what the report names the “four enemies of British industry”: complacency, indifference, underused resource and waste of misapplied energy. All graphs and images via Lord Heseltine’s No Stone Unturned in the Pursuit of Growth.