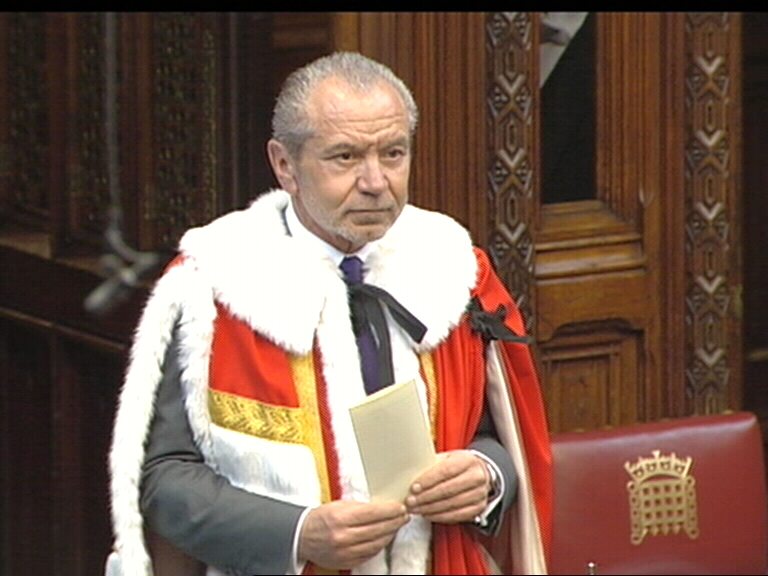 Speaking in the House of Lords, Lord Sugar said entrepreneurs should fend for themselves, and stop expecting everything to be handed to them on a plate.

“The thing is, people like me are a dying breed.” Lord Sugar boomed. “When, as a young man, I went to a bank with my hand out, they thought I was part of a Morecambe and Wise team. ‘Do you have any collateral, a balance sheet, some history of profits?’, they asked. ‘No,’ I replied. ‘Well then, clear off,’ was their response.” Speaking out against today’s “expectancy culture”, Lord Sugar said that entrepreneurs need to learn to fend for themselves. “It has been customary for a person dressed in a nice pair of designer jeans and a nice blue blazer and a white open-collared shirt, a bottle of Evian and a wonderful Microsoft spreadsheet in hand, to walk into a bank, mention the word dotcom and walk out with £5m. “Those days, I’m afraid, are over,” Lord Sugar warned. “We all know what went wrong, and we all know what a mess the banks got into recently. But the penny hasn’t dropped with some people. We still have an expectancy culture, where people still think that there should be money freely available to finance lost causes, poorly-run companies or a whim of an idea.” Lord Sugar’s argument is clear: would-be entrepreneurs need to realise that banks aren’t there to lend money to lost causes. Putting up collateral should be considered normal. “I am very sorry, but why not? Why should [the bank] take a risk on you if you’re not prepared to take a risk on yourself?” “Vince Cable? What does he know?!” The Coalition government also felt Lord Sugar’s wrath, starting off with Vince Cable, the Business Secretary. Lord Sugar questioned Cable’s right to tell SMEs what to do: “He has never been in business or run a business. He has been an adviser or a politician all his life. He has never touched the coalface. Frankly, what does he know?” Lord Sugar’s opinion of government-funded business support isn’t much better. His views on Business Link (RIP!), for example, are negative: “To be perfectly frank,” Lord Sugar said, “apart from meeting a nice bunch of people, there was no real business advice dished out other than simple stuff you could pick up and learn for yourself by going on the internet.” Instead, he said, the government should redeploy money spent on Business Link onto other projects, such as turning Britain’s “many empty premises” into incubator factories. “They could contain a core factory and a silo of workshops on the periphery. The core factory would be accessible to the individual businesses like satellites around a nucleus.” The blind leading the blind Lord Sugar also accused the government of “window dressing”, and advised entrepreneurs and SMEs to be more realistic in their expectations from government. He said:”Government should come clean in their message to help SMEs. Give SMEs the facts of life: by all means be bold and be adventurous, but be realistic. Do not expect anybody in Whitehall to give you any hints and tips on how to do it because, basically, that is a case of the blind leading the blind. “You are the business people, you are the ones with the ideas, and you are the ones who are going to drive your businesses forward, but regrettably, as with everything else in life, there are no free lunches.” Lord Sugar’s message is clear: entrepreneurs must continue to fend for themselves. Keep your feet on earth and work hard, those are the keys to success. “Do not rely on any government to assist you in running your business,” Lord Sugar said. “You are people who have chosen to go into business, which is very enterprising, and I am pleased about that, but do not expect to get any advice from the government about what products you should make, what ideas you should pursue, what services your business should provide or how you should market your products and generate income, because that is what you are supposed to do.” Touché, Lord Sugar.  What do you think of Lord Sugar’s opinions? Do you agree that entrepreneurs have to get rid of the “expectancy culture”? Leave your comments below. Picture source