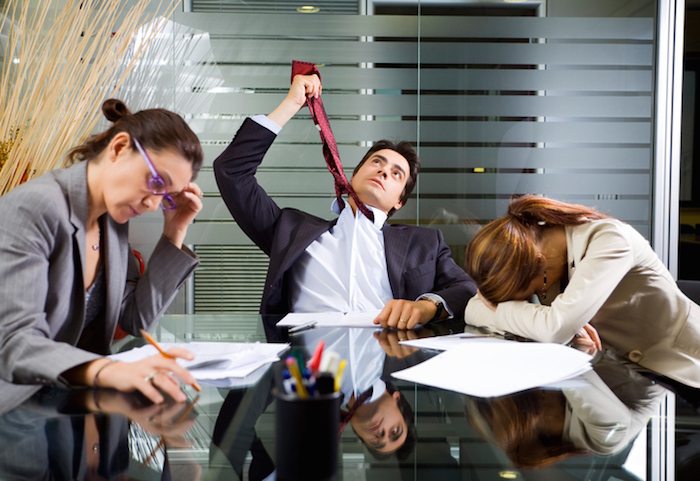 How can we avoid pointless work meetings?

Many of us, despite our earnest intentions to be a diligent and committed employee or boss, have, at one time or another, faded out during meetings. They can be long on time wasting, and short on things like goal setting. For some, the time-wasting involved in less than productive meetings can champion the view that remote working is the answer.

After all, when most people have access to a computer, the internet and a telephone, do they really need to be working together in one space According to statistics compiled by online scheduling platform, Doodle, the time-wasting that goes on during meetings is worse than we think. According to them, a whopping two-thirds of all meetings are a waste of time! Their research estimates that “pointless meetings” will cost companies $541 billion this year. So, unproductive meetings aren’t only a waste of time and energy for employees, it also takes a deep and devasting blow to a company’s pocket. Doodle interviewed over 6,500 professionals across the UK, Germany, the USA and Switzerland, and examined 19 million meetings to find out what employees were really thinking. Let’s take a closer look at what they found: ” The average professional spends three hours a week in meetings
” 24bn hours will be lost to pointless meetings this year
” 37% say they are the biggest cost to their organisation
” 76% prefer face to face meetings to calls or video chats
” 70% would prefer to hold meetings between 8 am and 12 pm The research dug deeper into the sentiment of employees, exploring what they thought the impact of these time-wasting meetings had on their companies. In response, 26% of employees interviewed said that poorly organised meetings impacted their client relationships. Another 43% said that unstructured and ineffective meetings created confusion in the workplace, whilst 44% said they impacted their ability to complete other daily work objectives.

The countries that hold ‘the most efficient’ meetings

Maybe it’s differing cultures, but whatever it is, here’s the list of the most, and least efficient countries to hold business meetings, measured by hours and minutes spent in them:

But if employees HAVE to have meetings, and let’s face it, bosses aren’t going to eradicate this age-old practice anytime soon, what method would they most prefer? Whatever form is most popular among their staff, it’s important that bosses implement them. Why” Because employees are more likely?to be enthused and productive when attending them: 76% of respondents said face-face meetings are their favoured format, which is an interesting finding. Whilst only 7% said they would prefer conference calls, and an even smaller 5% said they liked video calls, whilst a dismal 4% said they preferred instant messaging. ” What do these statistics prove Namely, that employees like the human connection and communicational clarity involved in face-face meetings (some 95% of respondents agreed with this). However, managers must do more to ensure these meetings are thoroughly prepared for, structured, and ultimately necessary if they want their staff to perform well, and for the team, as a whole, to get something out of them.

What makes a meeting pointless?

The respondents were also pretty vocal on what makes a decent, vs a disappointing and time-wasting meeting at work. If bosses and managers got the below points right, they’re more likely to hold a productive meeting, say the respondents:

” Setting clear objectives – 72%
” Setting a clear agenda – 67%
” Not having a crowded room – 35% However, some of the respondents had a couple of bees in their bonnet about what makes their meetings boring and pointless, here they are:

Lucky for office managers, staff still prefer the traditional meeting format of face to face connections, so it doesn’t look like they have to implement any drastic changes. However, more work has to be done to prepare for these meetings. Managers should ensure that they are structured, time-conscious and that they end with a solid agenda being reached for the next step. But employees have to do more work too, this includes preparing for what contributions they feel are important to make. Holding a meeting is perhaps the most formal element of working in an office, so staff and managers alike should ensure it remains that way, including leaving mobile phones, and idle chatter at the door.