London won’t be able to maintain its leading role when it comes to companies working with the euro, Manfred Weber said in a press conference in Strasbourg. That being the case, businesses benefiting from the currency should look to leave the UK.

Instead, companies were urged to move to rival hubs Paris, Amsterdam and Frankfurt. The move would, however, make a dent in a market contributing over £190 to the UK economy and 12 per cent of GDP.

As of yet, Reuters explained, “Weber claimed his remarks have merely been about ‘defending European jobs’, and lawmakers have only hinted that the London-based EBA, the European agency monitoring banking rules, should be relocated as quickly as possible. These opinions, and his lack of clear position when it comes to legislative proposals, could undoubtedly sour Brexit talks.”

What we do know is Weber views bosses choosing to remain in Britain despite their reliance on European business in a different light:

EU has done everything to keep the British. From now on, only the interests of the remaining 440 million Europeans count for us. #BrexitDay

As Jeroen Segenhout, correspondent for FD NL in Brussels, said: “Compassion? That’s not something Manfred Weber has for Brits. He believes he doesn’t have to consider their interests, even if it involves Gibraltar. In fact, he claimed Brexit was a massive step backwards – and that damage to the global economy was unavoidable.”

If Manfred Weber were to have his way though, some 100,000 jobs could be lost. That’s according to The Guardian, which cited Xavier Rolet, head of the London Stock Exchange, as saying: “Positions could be lost if the City’s clearing houses lost the ability to process euro-denominated transactions. Clearing houses are independent parties that sit between the two parties in a trade and are tasked with managing the risk if one side defaults on payment. London clears around three-quarters of all euro-denominated trades.”

The loss of banks would also hit the UK like a ton of bricks given that London makes £50bn in yearly revenues from European businesses. But should we have seen this threat coming? Labour shadow chancellor John McDonnell claimed it was “all too predictable”.

He said: “An extreme approach was used for the Brexit negotiations and will be a major concern facing our country since Theresa May triggered article 50. We need to know immediately from the government what its strategy is to protect jobs in the finance sector, because all we have witnessed so far is silent bewilderment.”

The loss of UK migration and its impact on British business 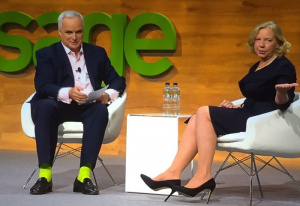