If you want to go into battle as an advocate, you need to be prepared to get a few scuffs and bruises. Gina Miller is no stranger to the uphill struggle when championing real change.

At this year’s edition of the Economist Pride and Prejudice, she spoke about the power of being an advocate and the way to come out unscathed when the haters hate hard.

Miller made headlines last year when she championed the legal fight to get Parliament a chance to vote on whether the UK could begin the process of exiting the European Union. However, there is a lot more to her than this. As she explained herself:

“My focus is not Brexit, I happen to do it in my spare time…I run a very disruptive investment business, and I run a foundation looking after 15 charities, and I do a huge amount of policy work.

“Keeping the government to account, if you like, because the opposition isn’t, is something I do in my spare time. That’s what you do as an advocate, you find the bandwidth to do it.”

Miller is an inspiration to many, but for her efforts she’s also received some truly upsetting, personal abuse – some of which she shared with the audience, and which drew shocked responses.

She made no secret of the fact that advocacy is really, really hard work, for plenty of reasons – but change is necessary, certainly in the business world, and advocates must find a way forward for their cause.

The path to advocacy

Thinking back to the first thing she advocated for, Miller reflected that women have a potential advantage in this arena:

“We are lionesses, we tend to look after our young, and for me the first advocacy was for my eldest daughter… on the night that she was born, there were no midwives to deliver her. She was starved of oxygen, so my battle was for her.”

Miller fought against the system that did not protect children with special needs, like her daughter.

“Because I had studied as a lawyer, I basically did my homework,” said Miller.

“I looked at the law, I looked at policy making, I looked at how I could change what was being done by local authorities, by the educational establishments, went to see doctors all the way around the world.”

Interestingly, however, Miller doesn’t believe the path to advocacy has a concrete destination. She claimed that if you set clear goals, you be “in mourning for loss all the time”.

She believes that instead, you have to have a direction of travel, but there are many paths to it.

The aims she sets herself at the start are usually measured by a) the outcome for the group she is fighting for, b) the longer-term goals she wants to achieve, and c) what she will learn from the experience.

“The more you learn as an advocate, the better you are for the next fight,” she explained.

In general, it may feel as though there have been improvements in equality in the business world over the last 20 years or so, but this is no reason to sit back and relax. As Miller said, “we have to be vigilant, because those changes can come and go”.

“It’s fantastic that change is happening in the corporate world, in big corporates, but there is a part of me that gets suspicious and thinks, how much of it is box ticking?”

She gave the example of the gender pay gap. Some companies might show that the pay gap appearing to close, but what if bonuses are not included? Has the pay gap simply shifted to the bonuses, rather than the salary? Has any real change happened?

Of course, a large part of advocating for real change in a business is related to business culture, and that comes from the top and filters down.

For this reason, diversity at the very top of companies is crucial. This doesn’t just mean diversity in terms of looks and gender, but social diversity as well.

Miller argues that if the top-level roles are dominated by people from the same background, the same university, the same private schools, we risk having people in positions of responsibility that look different, but think the same way – this is not the way to create really change.

“You cannot be a delicate flower when you are a change-maker,” warned Miller.

“You have to steel yourself to be an advocate, you invest time, energy, you need to know your stuff, you need to be armed with knowledge…and you’re constantly having to refresh that knowledge base because sands shift and you need to stay alert to what’s going on…

“And obviously you will then have the abusive side of it, because people push back when it comes to change.”

It’s clearly a huge amount of work to be an advocate, so how do you go through all of this and come out the other side still fighting?

It becomes easier, according to Miller…in fact, she says it becomes a habit. But what about steeling yourself for the personal attacks that may come your way?

“I tend to look at it this way: if I’m picking a fight where they’re attacking me, and not what I’m saying, then I know I’m right.” 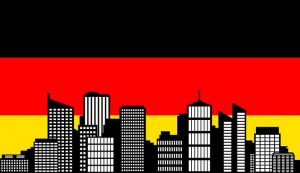 What UK SMEs can learn from German counterparts about productivity