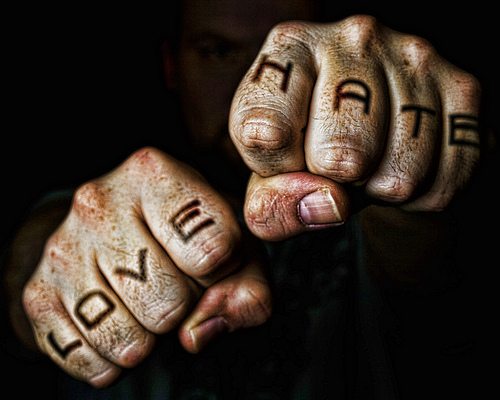 Another relevant phrase: “All publicity is good publicity”. Strangely enough, brands with a notoriously hateful consumer base sometimes come paired with a fanatic one.

Alistair Leathwood, managing director of FreshMinds, explains: “As a nation, we’re famous for our love of the underdog, so hating big brands is something of a national pastime. However, when it comes to doing the weekly shop or getting a quick bite to eat, consumers still spend cash on the brands they are proud to hate.” FreshMinds research, conducted in 2009, found that some of the biggest corporate names topped both the most-hated and loved lists. For example, it was found that 28 per cent of those polled who loved Tesco, did so because of their customer service. However, for 22 per cent, customer service was also one of the reasons why they hated the Tesco brand. The retailer came second in the most-hated list and ranked 6th on the most-loved. Divided opinions like these were also true for Coca-Cola, with 27 per cent loving their advertising, and 24 per cent finding Coke irritating for the same reason. But in what ways have such brands grown their consumer base?

No talk of so-called ‘Marmite’ brands would be complete without, well, Marmite. Invented by accident, marmite first became an established brand in World War I, and was a quick hit with mothers, due to its nutritious properties – jars would be shipped to troops overseas. However, by the 1990s, no longer only used for rations, Marmite’s strong flavour garnered a polarised reactions amongst consumers. To all the Marmite nay-sayers, Oliver Bradley, brand manager at Unilever Bestfoods, says: “People would be disappointed if we changed now.” But what makes the brand so successful? Their trick is actually quite simple: they recognise the divide in opinion and use it to their advantage. One of their ad’s involves a man bringing home a date. As they kiss, the man leaps back, looking disgusted. Not for the woman, though, but the Marmite he sees sitting on the table. The now oft’ repeated punch line comes into view: ‘You either love it or hate it.’ The company promoted itself upon the idea that they were divisive – entertaining audiences with the mystery of its divisiveness.  By Shané Schutte