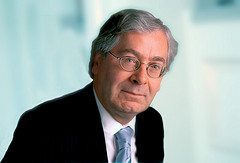 Mervyn King is playing the part of the proud and foolish captain of the Titanic as he steers us into waters laden with financial icebergs.

Jeremy Warner, writing in the Telegraph about the effects of another £75bn of quantitative easing, puts his finger on it when he says “the Bank of England will own nearly half the market in three to 25-year gilts, or 32 per cent of the total stock of UK government bonds.  Even when steeped in the economics of QE, this looks mad, and when things look mad they generally are… by switching on the printing presses, the Bank of England, which is 100 per cent owned by her Majesty’s Government… (means) the Treasury is becoming ever more in debt to itself. It is as strange as that”. This ‘Alice Through the Looking Glass World’ continues because King & Co are convinced that by using QE to keep interest rates artificially low this helps those in debt to go out and spend, spend, spend (come in Dave) and who cares about savers who don’t spend anyway! Meantime his target audience is faced with a very high rate of inflation to which King says never mind, inflation will disappear in two years’ time.  Does no-one in the BoE realise that people deal with the here and now as they see it and not some theoretical outcome years down the road? The result is, of course, that those in debt concentrate on paying off those debts and those earning tuppence ha’penny on their savings, save more in an effort to have enough to retire on. This is the policy of bankrupt financial minds. It’s high time to take a leaf out of Steve Jobs 1997 “Think Different” campaign, so in homage to that, let’s think differently. Has it occurred to our financial leaders that if you let interest rates rise to their natural level then savers will get out and spend because their ability to maintain their capital base has then improved? At the moment King & Co are trying to frighten savers into parting with their cash because real interest rates are massively negative.  This is the tactics of the playground bully and savers will naturally resist such childish ways. If you want savers to respond, then treat them properly. Stop feeding the debt market monster. Start encouraging investors.