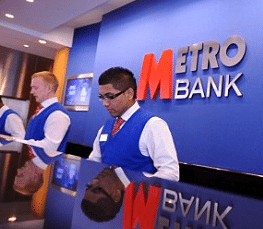 Metro Bank, founded by Anthony Thomson and US billionaire entrepreneur Vernon Hill, opened its first branch in Holborn, central London. But instead of competing against the other banks on price and rates, Metro Bank is focusing on customer service. Will it sway Britain’s masses? From what we’ve gathered, Metro Bank’s proposition is pretty compelling – the bank will have long opening hours (8am to 8pm) and be open seven days a week. The bank also promises to let people open a full account – including debit and credit cards – in just 15 minutes. “We believe customers simply want a better experience from their bank, the kind they typically get from a great retailer,” Metro Bank chairman Anthony Thomson explains, “That’s what we intend to give them.” Anthony Thomson and Vernon Hill have big designs for the bank. Metro Bank will open ten more branches in the next two years, and aims to have 200 outlets in Greater London by 2020, capturing ten per cent of London’s consumer banking market. To fund the expansion, Metro Bank could raise £250m in the next three years, probably though an IPO, Anthony Thomson adds. “I have opened 500 similar locations in America,” Vernon Hill told BBC News. “Britons are dying for revolution in the banking business, focused on service, and we’re here to provide it.” Metro Bank received approval from the FSA in March this year, and has been keen to get started. Its ethos – “love your bank” – could prove possible amongst the masses, which have generally turned against high street banks following the economic crisis. A recent survey by price comparison website uSwitch.com found that 57 per cent of bank customers viewed the industry in a dim light, and 37 per cent said that new banks will be innovative and change the industry for the better. If the economic crisis has had one positive effect, this is it. A bank where customer service takes priority and with “no stupid bank rules” could lead the change towards a customer-centric banking industry. Metro Bank could help customers become kings again. Otherwise, they’ll just see all their customers move away. “We see a huge growth opportunity,” says Thomson. “The only way for other high street banks to improve profits is to cut their costs. We will invest in services because we are in the business of taking market share from the other banks.”