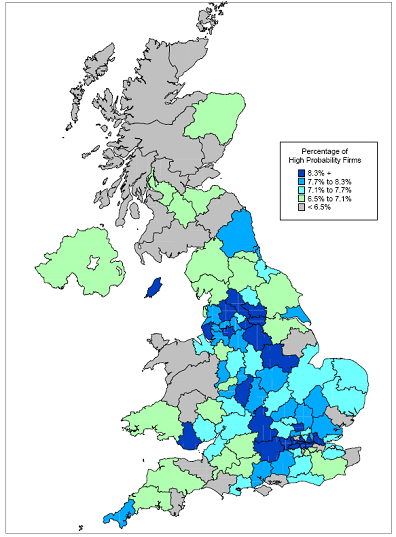 New research shows that of all the jobs created by SMEs in the UK over the last ten years, 4.4 million jobs were created by fewer than ten per cent of SMEs.

Further analysis shows that these “champion” high-growth firms created two thirds of all the jobs within the SME community. Clearly, identifying and nurturing potential champions holds the key to driving economic growth. The study, published by Experian, shows that the Midlands and the North East of England have some of the healthiest levels of future champions. The report also suggests that champions exist across all sectors of the economy, regardless of whether a sector is considered a growth area. So what identifies a champion? Here are Experian’s main findings: Detailed analysis from the period 2003-06 (pre-downturn) shows that while the slower growing firms created around 860,000 jobs, while SMEs that declined or ceased trading lost around 3.7 million jobs. Champions, however, created 1.6 million jobs, significantly reducing the net loss within the SME community. “Our research shows that support focus should not be on just sectors,” says Charlotte Hogg, MD of Experian UK. “It’s key that the new Local Enterprise Partnerships and the Regional Growth Fund do not over-emphasise the high tech or green sectors, as champions can exist in all sectors. “It’s also not about regions. Some of the least resilient areas in the UK have some of the highest levels of potential champions – driven by a need to innovate.” Instead, adds Charlotte Hogg, the key driving rapid employment lies in the ability to identify potential champions – new and old – that share the same DNA as those that fuelled employment over the last ten-year period. “It absolutely matters who leads the business, and their experience, and it matters whether that business is linked with other high growth companies, and whether or not they have an international focus.”