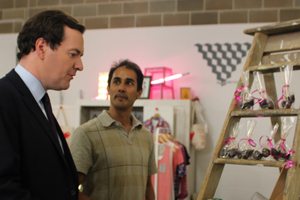 The retail arm of StartUp Britain celebrated the opening of PopUp Chard in Somerset earlier this week and is getting ready to launch shops in Ashford in Kent and Dunstable in Bedfordshire next month.

StartUp Britain co-founder Emma Jones said: ?We ve just opened our ninth pop-up shop in the UK and our first ever in the South West. We re looking forward to taking the huge success we ve had in some of our more high profile London stores including PopUp Piccadilly across the UK to new areas. The initiative, which seeks to nurture the high-street entrepreneurs of the future by opening empty shops to collaborating groups of retail entrepreneurs, was given a boost when Chancellor George Osborne popped in to its central London store this week. He paid a visit to PopUp Piccadilly and bought chocolate from ethical chocolate producer Ubantu Chocolate, run by entrepreneur and chocolatier Jeremy Wickremer. Osborne said: ?PopUp Britain is a fantastic initiative which has my full support, and the retail space in Piccadilly I visited provides a great opportunity for start-ups to showcase their products. The start-ups I met embody the entrepreneurial, aspirational Britain we are backing. That’s why we ve introduced tax reliefs for angel investors, cut rates for small business and opened up Whitehall procurement. Also, from next April, the new Employment Allowance will wipe out the national insurance bills of many start-ups.” The campaign’s most recently-opened shop in Chard is set to trade for 12 months and the day-to-day running will be undertaken by the local Town Team. Its first group of retailers include an inventor from the South West Inventors”Club, a glamping expert who makes tasteful roll-up beds from British lambs” wool and a wedding stationery designer. PopUp Dunstable will open on September 19 and will run for three months. New start-up retailers will regularly share the space for between two and four weeks. The shop has the capacity to house four start-ups, co-working and co-funding the space at a time.  PopUp Ashford will be open for six months from a date yet to be confirmed next month. By Shan” Schutte