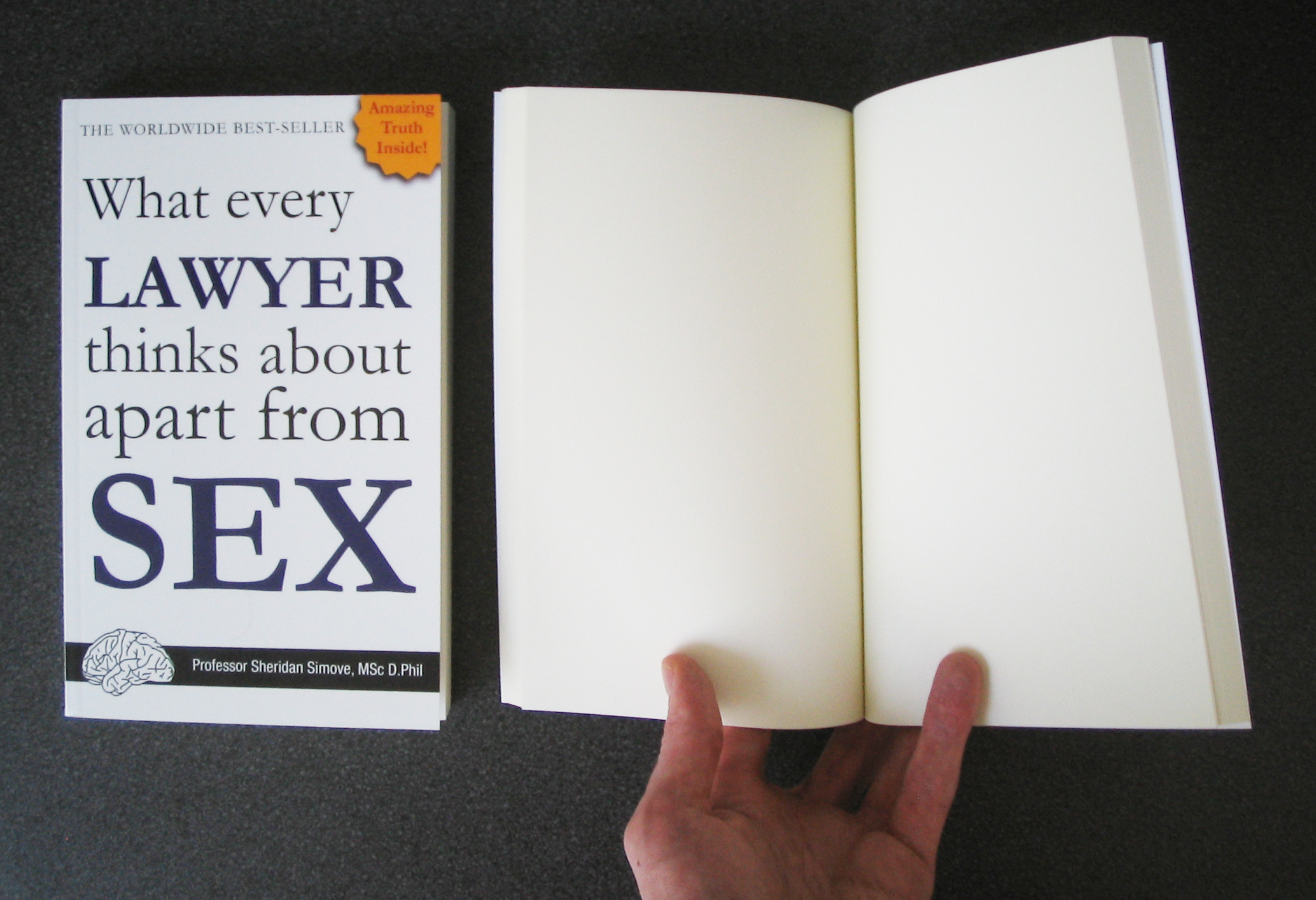 Lawyers. They get a bad rap. Is it justified?

As you might know, I recently launched, What Every Man Thinks About Apart From Sex ? a 200-page book?that?s completely and utterly blank inside. Amazingly, it became a worldwide sensation and is now being published in numerous territories around the globe. It even reached number 44 on Amazon. In fact, the blog I wrote on Real Business?about it?incredibly (and surprisingly) went on to be the most-read blog ever. Now, just as I?d started to get used to receiving enquiries from publishers from other countries wanting to pay me good money to print their own version of a blank book, I received an enquiry that would once again take me by surprise and add another delicious twist to an already bizarre set of events. One morning, an email popped into my inbox from a guy called Philip Jenks at the Carbolic Smokeball Co, a quirky gift website selling niche presents for specific professions, such as bankers, doctors and teachers. Philip had seen my blank book and had emailed to suggest we print another version called What Every Lawyer Thinks About Apart From Sex, which he believed would sell well to members of the legal profession. I immediately called him up and we got on famously right away. I quickly agreed to the new version, subject to permission arriving from Summersdale, the UK publishers who had taken over the publishing of the original book from me when it had become a runaway success. Once Summersdale agreed, I gave Philip the green light and he immediately felt the full force of my meticulous ways: a stringent contract detailing exactly how the book should be made, what it should look like and how it should feel in the hand. After some bad experiences with companies who wanted to print the book, I had to make sure that even though the new version was also blank, the cover, print quality on the outside, and texture of the paper inside was of a high standard. Philip seemed surprised by how much attention I paid to the specifications of the book. In fact, he?d previously founded publishing company Harriman House and informed me that he?d never encountered any author who?d been so obsessed by spine width or grade of paper. My neuroses stemmed not only from my general perfectionism and fierce desire to always give the customer a superb quality product (even if it is a novelty), but also because with this book, all we had was one joke ? the outside absolutely must look authentic, so that any person picking it up for the first time will be genuinely surprised at finding ?nothing? inside. The presses rolled and a week later, a fat padded envelope dropped through my letterbox… The book was finally here ? and we?d made it come to life. What a triumph! I pulled the book outand examined it carefully. I thought, “Nice finish on the cover. Well printed. Spine looks good. Pages inside feel authentic but… hold on… oh my? the book is REALLY thick.” I rushed over to the original version to compare it, and immediately saw that the new onehad exactly double the pages of the original version. It seems that a wonderful ?lost in translation? situation had occurred ? the book was meant to have 200 sides, not 200 pieces of paper inside (which is actually 400 sides). Breach of contract. Get my lawyers on the phone… In the end, I left it how it was, deliciously thicker. Plus, it?s now got double the usefulness and value as a notebook. And there’s something really rather hilarious too about the fact the lawyer version of the blank book has even more ?nothing? than the normal version. In the end, the book has now been happily published and is available on www.carbolicsmokeball.com. And all this goes to delightfully show two surprising outcomes: first, that sometimes can you get money for nothing; and second, that lawyers don’t always check contracts…. Find out more about Shed at www.ShedSimove.com and add him on Twitter and LinkedIn.