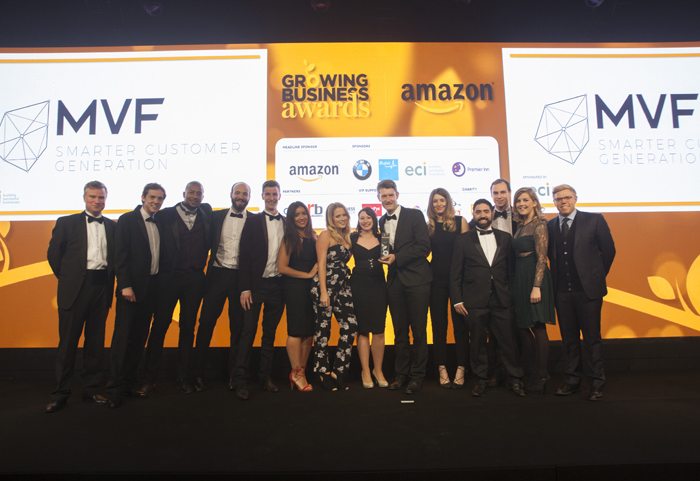 Share via
The business-to-business sector is one that brings together a wide range of services and offerings, all clamouring for custom and eager to convince the market of a superior product. And now MVF has placed itself firmly at the top of that pile. For MVF, a seven year-old business turning over almost??40m?and employing 350?staff, its reason for being is to help other businesses secure new customers around the world. Bringing together the worlds of technology and marketing, its success has been down to capitalising on new opportunities ? accomplishments recognised at the Amazon Growing Business Awards in November when it picked up B2B Business of the Year. Titus Sharpe, CEO and co-founder of the London-based company, put the award win down to surpassing all targets set at the beginning of the year and its efforts to grow a US operation. For a business which has not only joined the Amazon Growing Business Awards alumni, but is also a Queen?s Award for Enterprise recipient and places fourth in the Sunday Times Best Companies to work for, we wanted to know what has been crucial to getting where it is today. ?Having a scalable hiring process that could keep up with the company?s massive growth has probably been one of our key challenges to date,? Sharpe revealed. ?At one stage we needed to hire 100 people in 100 days, and finding people with the right experience was not always easy. We have remedied this by creating our own internal ?academies?, where we hire groups of graduates and train them up together.? This has allowed MVF to speed up the rate that people get assimilated into the business because, as Sharpe put it, they learn everything in a ?carefully tailored fast-track programme?. So what does it take for a business to be in the top five of companies to work for in the UK? Alongside the usual mix of free activities, annual weekend abroad and charitable output, MVF gives each employee an individual staff training budget of ?1,000 ? which can be spent on whatever course they feel is most important to personal development of skills.

Aside from its staff, Sharpe believes the company?s edge, what sets it apart from the competition, involves innovation in marketing and technology. ?We have one department that is set up just to test new channels as they emerge, which means we are never behind the curve and are always adding new ways to tap into customers,? he explained. ?Businesses can?t do this sort of testing themselves usually because it is just too risky for them to invest in new marketing which has not yet been proved to work ? but our clients only pay for the actual leads we send, so there is no risk at all.? Sharpe and his management team reward teams for trying new things, and as long as there is a sound reasoning behind an idea it will be tried out. ?One of our values which we hire against is ?loves innovation? and so it is something all our staff believe in and the constant stream of new ideas makes MVF an exciting environment to work in,? he added. MVF beat off competition from the likes of XLN, Yu Energy and EMB Group to scoop B2B Business of the Year at the Amazon Growing Business Awards ? the 18th time the prestigious event had been held. Sharpe and his team were in attendance to soak up the acclaim, something he enjoys particularly as it is ?great validation? for everyone?s hard work in taking the business from a basement-based startup to an established international company. It?s overseas activities are central to future growth, with the goal of five-fold profit growth and a staff count of 1,000 in the coming five years. The coming year will see MVF launch a business-to-consumer (B2C) division in the US, all lead by the company?s newly-appointed US CEO. Another focus will be mergers and acquisition, with some ?great prospects? already in the pipeline. From three friends in a basement back in 2009, MVF has achieved impressive growth ? all the more impressive considering it has only ever had ?100,000 worth of investment. There was, however, the sale of a 40 per cent stake to private equity firm Bridgepoint in 2015. All five founders are still invested in the company, with Sharpe describing it as very much ?business as usual? after the deal was closed. All good businesses need ambitious targets, and it appears Sharpe will not be content until his business is leading the way around the world. All he and the team need now is more businesses looking to do just that too.