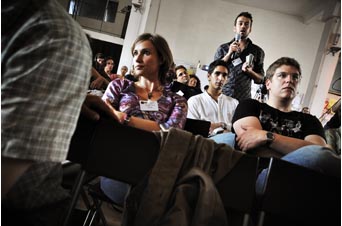 To address continent-wide youth unemployment and boost Europe’s competitiveness in the new digital economy, the European Commission has launched a “grand coalition for digital jobs” to address the region’s IT skills shortages.

The project has been welcomed by Computer People’s director, Niall Cook, who believes the issues stem from a lack of education in schools and universities. “We seriously need to start teaching young people the skills they need to work in IT,” says Cook. “The number of digital jobs is growing by about 100,000 every year, yet the number of skilled IT graduates is failing to keep pace. We must have a much greater awareness of IT career opportunities as a whole.” The commission’s own figures suggest that there will be 900,000 vacancies for IT-related roles by 2015; a lack of highly skilled engineers is a particular cause for concern. To tackle the problem, €1m (£860,000) will be invested into the new coalition. The commission’s proposals also include simplification of the certification system, making it easier to prove what skills a graduate has, regardless of which EU country they have worked or studied in. Europe’s fast-growing IT industry needs such interventions. “In the last three years we have seen a huge increase in the need for developers to go into growing SMEs, as well as blue-chips,” says Cook. Opensource technology, he says, is creating opportunities in “exciting new movements” such as digital media, mobile gaming, mobile apps and social media. To meet demand, the UK’s private sector (especially within London’s famous Tech City) is stepping up. In January, Google chairman Eric Schmidt announced that his firm was to contribute to a scheme giving schools 15,000 free microcomputers. On a smaller, but still significant scale, Computer People offers on-the job training, online tutorials and courses to all their candidates (even after they have started a new job). Whether such initiatives are enough, only time will tell. The pace of change in consumer technology (both hardware and software), however, is unprecedented in economic history. For Europe to be a serious contender to the US in the digital arena, the continent needs to invest and meet the huge demand for skilled IT staff. Ruari Phillips is a recruitment entrepreneur and journalist based in Canary Wharf.