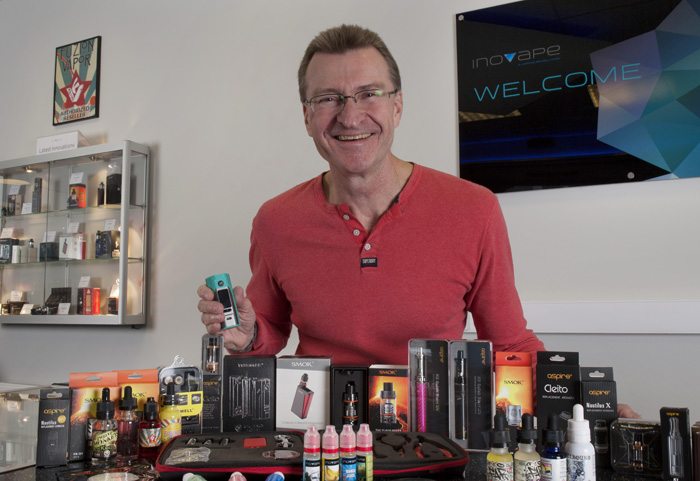 Share via
Starting a new business in a relatively new industry can make life difficult. How can companies like Ino-Vape counter this when ambitious growth plans are laid out? Ino-Vape is a vaping supplies and accessories specialist based in Solihull. Only a few years ago, you’d have been hard-pressed to find someone that knew what vaping was – and now it’s so popular it’s developed almost cult following. Having only opened its first shop in 2015, the question for Ino-Vape has always been on of how does a business scale from startup quickly enough to meet demand when it’s suddenly very on trend? Challenges of dealing with a booming industry such as vaping include raising awareness among business partners and keeping up with the rate of change within the industry. For example, Ino-Vape has struggled to get its hands on premium high street locations as landlords would rather take on big chains or more mainstream offerings such as cafes. In addition, the product lifecycles in a rapidly changing industry are very short, and it can be hard work to stay ahead of the curve. Spotting a gap in the market When there’s a sudden rise in popularity in an industry, it’s important to strike while the iron is hot – there’s no point getting in on the action when the market is already saturated. Breslin timed it well. “I got into the industry on a personal level as initially a customer and discovered the product was hugely effective, but that there was a general lack of awareness about vaping, and the shops were perhaps not run by professional retailers,” Breslin explained. “The market has been doubling/tripling year-on-year, but few shops were delivering the levels of retail service and support the customers deserve.” Spotting this opportunity to start a business and expand it at a fast pace, Breslin took action aimed to get prime locations in city centres. Having proven that city centre locations can create enough sales to support the higher rents and generate profits, Ino-Vape began to focus on opening another location. “As this shop will be very close to our supply base, we’re developing a new website for ecommerce. This store’s role will then be roughly half high street retail, and half fulfilment of stock from online orders.” While this is the focus for Breslin right now, his longer-term plans are still more ambitious. “My short-term goal is to launch three shops to provide ‘proof of concept’, with backing lined up to help with the longer-term aim of opening more shops in the coming years.

“My intention is to expand to a branded chain of these shops. That is the aspiration. I would like to do this nationwide and get everyone off cigarettes, save a lot of lives, save the NHS a lot of money and, of course, build a business. We shall see, of course.”  The biggest challenge The main challenge in getting the business to where it is right now has been financing. I’ve not sought crowdfunding because, generally speaking, you need to have been in business three years. Angel investors want a certain degree of oversight on your business, and I would prefer less interference, and to remain wholly independent,” explained Breslin. To fund the launch of his business – and to fund the future growth of the business – Breslin turned to pension-led finance. “Most of my equity was tied up in property and, not wanting to sell, I focused one of my pension pots which was sitting doing nothing, while my property value was growing.

“I was looking for an extra £45,000 to be used to buy a retail property in a high street location, purchase stock, merchandising, employ staff and shop fit.”

For Breslin, this has worked well. He weighed up how best to utilise his assets, and it made sense to use the underperforming pension pot. He was confident he could get a better return on the investment this way. He plans to fund a third of the finance for the second shop through another round of pension-led funding. This plan made sense for Ino-Vape, but as we have outlined before in this series, it is vital to weigh up the risks before delving into your pension.

Predicting the future for Ino-Vape With any new industry, predicting the future can be tough. According to Breslin, e-cigarettes are much healthier and cheaper than the real thing, and he believes that the financial pressures of an uncertain economic environment will steer smokers towards vaping as an alternative. However, he has one eye on the government to see how the industry will be regulated in future. “So far, it has been a light touch approach. But, there is a huge amount of guidance from the EU which ranges from a complete ban to much lighter regulation. “The UK have implemented regulations on what goes into the vaping liquid which is a good thing, among other safety measures – including battery safety. We believe these are good initiatives and support their efforts as it reassures the public that the government is regulating the industry, and ensures that all products are safe.”
This article is part of a wider campaign called the Scale-up Hub, a section of Real Business that provides essential advice and inspiration on taking your business to the next level. It’s produced in association with webexpenses and webonboarding, a fast-growing global organisation that provides cloud-based software services that automate expenses management and streamline the employee onboarding process.