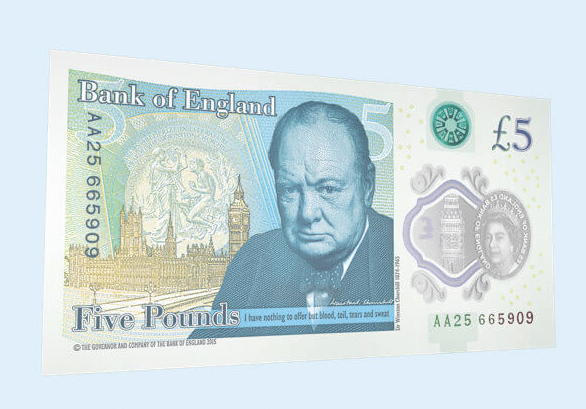 Share via
The new ?5 note made from polymer has a number of features which will make it much harder to counterfeit. These include a see-through window and the Elizabeth Tower which is gold on one side of the note and silver on the other. While this is undeniably good news, Britain is actually only finally catching up on security innovations which are nearly thirty years old. The ?5 note is something of an icon. The first fiver was issued in 1793 ? during the war with revolutionary France ? and the design remained largely unchanged for more than 160 years, with a new, multi-coloured version issued in 1957. Six years later, the first ?5 note to feature the Queen?s likeness went into circulation. Since then, we?ve seen The Duke of Wellington, George Stephenson, Elizabeth Fry and now Winston Churchill appear on the notes. But, despite our attachment to paper (well, plastic) money and our historical icons, in reality British society is on the brink of becoming a cashless society with over 200 million contactless payments made in June, up 169 per cent from last year. The new note does mean accountants can help their clients ensure they are conducting their business in an ethical and proper way, without having to worry about any nasty surprises. But it would be far safer for businesses of all sizes to deal entirely in contactless and cashless transactions ? as every card payment can be traced from origin, unlike cash. There are environmental benefits to the new fiver too ? notes that are expected to last two-and-a-half times longer than the current crop means that fewer have to be printed, using less raw materials. However, the Bank of England should instead be looking to further encourage the progression of a truly cashless society, where even the smallest payments can be made electronically and accepted by independent retailers and micro-businesses. Moving away from banknotes altogether, and pushing through measures that will see?contactless and electronic payments accepted in more places, will bring even greater environmental benefits. As it is, retailers that use machines to automatically handle cash will need to update these ? at their own cost ? to recognise the new notes. However, the Bank of England has made moves to help smaller, independent retailers identify genuine banknotes. There is an app that offers an interactive touchscreen guide for checking the notes. But I can?t help feeling that we?re missing a trick here ? with a third of Brits believing that?cash will become obsolete in the next five years, the Bank of England seems oblivious to the public?s readiness to embrace the digital revolution, at least when it comes to currency. And even if the Bank of England isn?t moving with the times, small businesses should be. The time to invest in systems that accept cashless and contactless is now, if you haven?t already. What?s more, accountants should be recommending that their clients do this, as it can streamline processes, reduce fraud and boost efficiency for everyone ? not to mention giving more choices to the customer. Lee Murphy is the owner of accountancy software provider Pandle Image source