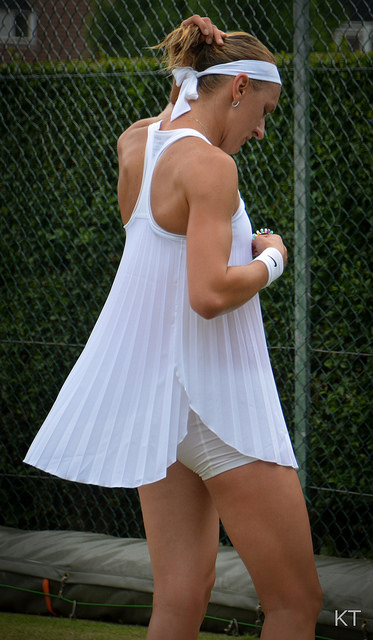 Given that Wimbledon is a prestigious event, it stands to reason it has a strict dress code ? all clothes should be white and common standards of decency are required at all times.

So if athletes playing in such an event represented your brand, then wouldn?t you do your best to adhere to the code and ensure they could play at their best? More than ever, if your products will be appearing on the big screen, then you need to have delivered on those standards and performance promises. Nike is a case in point. While it promised ?power pleats and racerback construction, which work in tandem to enable the athlete?s movement,? Sweden?s Rebecca Peterson said: ?It was flying everywhere. When I was serving, it was coming up, and I felt like the dress was just everywhere.? It wasn’t a scandalous outfit, but players had to devise ways to prevent their mid-sections from being on display each time they jumped ? picture a lose nightie and the way Alice in Wonderland?s dress balloons when she falls down the rabbit hole and you?ll get a perfect image of the ensemble. Peterson ended up wearing a long-sleeved shirt over her dress, Hungary?s Timea Babos tucked the dress into the bottom of her shorts, Czech player Lucie Hradecka put on leggings and Britain?s Katie Boulter opted to use her headband as a belt.

Katie Boulter in the tennis.
Probably a match she’d rather forget- she was up a set & 5-1, but lost.@KatieBoulter1 pic.twitter.com/NKKIEKVEiL

The Nike design used as Lucie Hradecka’s shirt at Roehampton is going to be Genie Bouchard’s dress at #Wimbledon: pic.twitter.com/r3YI8bVhNw

This was probably not what Nike had in mind ? hence the alterations and later option of wearing a more traditional skirt and top combination. Needless to say, there were several takers. To sum it up, the dress failed to meet the one mandate of athletic apparel: don?t hinder performance or distract the player.

But why did Nike decide to veer so far from its normal attire? After all, in the words of Andy Murray?s mother Judy: ?The important thing for any clothing manufacturer who is sponsoring top players is to make sure the clothing is functional for the job in hand. Anything that is not functional proves distracting to the players and that’s not in anybody’s interests. I know from experience of watching the boys, you have to get the clothing and the footwear right because these are partly the tools of your trade.” Appearance, it seems, is still a big hurdle. And Nike was appealing to those with more feminine tastes. Writing in the The New York Times in 2015, Ben Rothenberg said Serena Williams had ?large biceps and a mould-breaking muscular figure. Her rivals could try to emulate her physique, but most of them choose not to because body-image issues among female tennis players persist, compelling many players to avoid bulking up.? The need for us to feel people should conform to a certain image is still alive, and it’s rearing its ugly head in the tennis world. For example, Atlantic senior editor David Frum took to Twitter to shame Williams after reading Rothenberg’s article.

Eliza Truitt said it well when she questioned why women were still expected to play tennis in dresses and skirts in the first place. She said: “Unlike ice skaters, tennis players are not scored on how they look, so they can’t claim they are captive to judges? preferences. And women don?t wear them because skirts are more comfortable or conducive to better play; if that were the case, male tennis players looking for a competitive edge would have adopted skirts, too. (If you doubt this, consider that male athletes shave their legs and don body stockings for swimming.) Plus, pro women usually wear shorts for tennis practice.” Truitt concluded that ?giving a little panty flash now and then? is one way for women to boost their star status and endorsement value. This can only be highlighted by the Women?s Tennis Association trying to keep its players “delicate” by handing out penalties to women who grunt or let out a shriek during games. Similarly, Taylor Townsend attended a tennis academy sponsored by the United States Tennis Association, only to have the association back out in the US Open?s 2012 teen tournament because she wasn?t slim enough. Let’s also not forget that some feel female tennis players don’t deserve the same fame or money as their male counterparts. Such behaviour isn’t the preserve of tennis though. In February 2016, David Noake, the boss behind a banned cancer “wonder drug” was found guilty of sex discrimination after writing on his personal assistant’s job application: “Red lipstick, heels ? good; tattoos, do not approve; wearing a dress ? excellent.? His assistant also stated that Noakes remarked after interviewing a woman: ?We can?t hire her as she is ugly and overweight and I only employ beautiful women.? More recently, a PwC worker was sent home without pay for not wearing heels. “I said ‘if you can give me a reason as to why wearing flats would impair me to do my job today, then fair enough‘, but they couldn’t,” she said during a BBC interview. “I was expected to do a nine-hour shift on my feet escorting clients to meeting rooms. I said ‘I just won’t be able to do that in heels’.” And when she allegedly asked if a man would be expected to do the same shift in heels, she was laughed at. Attitudes such as this, still prevalent in all sectors, will only ensure gender equality happens at a snail’s pace. And with it being estimated we’d only close the gap in 118 years ? meaning most would never come to see it ? it becomes a far more scandalous topic than that of the Nike dress.  Concerned with issues surrounding gender diversity in business? Don’t miss the Real Business First Women programme: Drawing on years of the First Women movement and the phenomenal network of pioneering women the Awards has created, this programme features The First Women Awards and The First Women Summit ? designed to educate, mentor and inspire women in all levels of business. By Shan? Schutte