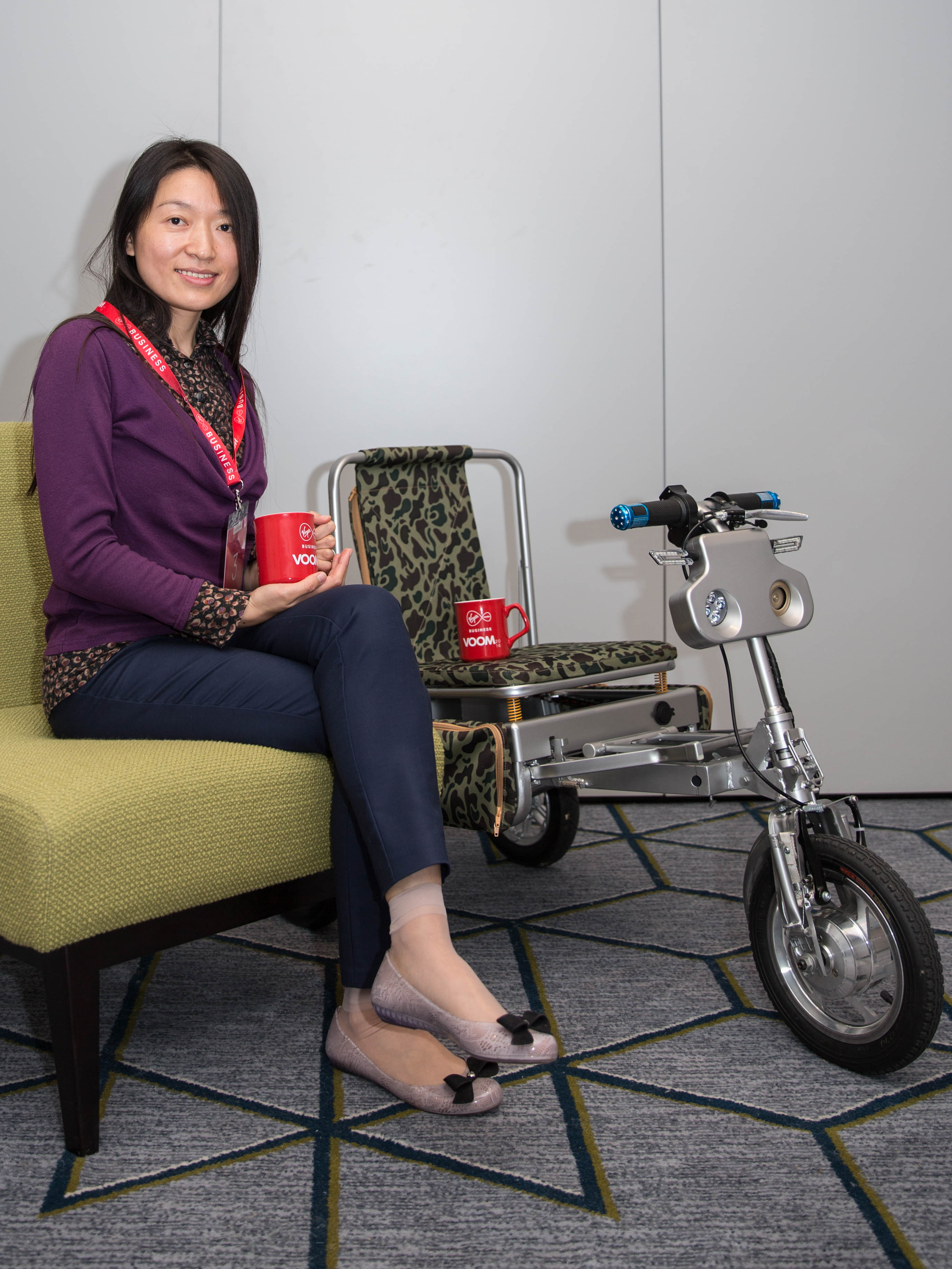 Share via
Sumi Wang is the gizmo’s co-inventor and she’ll be facing off against another two companies on Tuesday 28 June as she looks to win big at the VOOM grand finale, where she’ll pitch to Richard Branson for a share of a £1m prize. Explaining to us just exactly who the eFOLDi caters to, Wang detailed a wide variety of consumer use cases, which will have contributed to the title of British Invention of the Year 2016 at the Gadget Show Live. Location: London Founding year: 2012 Sector and company description: SunTech UK is a specialist company determined to bring innovatively designed products to UK customers, to improve convenience, efficiency, enjoyment and the quality of people’s lives. eFOLDi is the first of many products to be designed and made for the UK market and beyond. (1) What was your inspiration for launching the business? To bring our invention of eFOLDi from paper to reality, and to help more people to get around easily. (2) Who are your target customers? eFOLDi will be marketed to three different kinds of customers: 1. As walking aid for elderly people and people with mild disability. At the moment, many people in these categories struggle to go on holiday with their family or friends, because they have difficulties walking for a long time due to arthritis, heart conditions or pain. Some even have traditional mobility scooters, which are too heavy and chunky, and are difficult to take on public transportation or be put into the boot of a car. 2. As handy e-vehicle for daily commutes for working people. eFOLDi can be used as general e-vehicle, where traffic jam and pollution are major problems. People will be encouraged to leave cars at home or park them just outside city centres and ride the eFOLDi to get into downtown. This means that there is no need to worry about parking, as the product can be folded into a suitcase and taken into the office. It also helps to ease traffic and pollution problems within cities, as well as saving people time and money on parking and petrol. 3. As an off road transporter for recreational uses. eFOLDi is a great personal off-road vehicle for golfers, anglers, yacht owners, campers, festival-goers or as an add on accessory for car owners.

(3) What prompted you to take part in VOOM this year? After we won the “British Invention of Year 2016” at the Gadget Show Live, lots of visitors came and tried eFOLDi, some of which encouraged us to apply for VOOM or Dragons’ Den. At this stage of our business, we believed it was the best time to enter the Virgin Media Business VOOM 2016 competition. (4) How did you find the Pitchathon, and what did you do to prepare? I was really excited to be part of the Guinness World Record! I was lucky in the sense that for my business I have a physical product to bring and show to the judges. It’s also a product that I have been working on, day in and day out, over the last couple of years, so I had to decide what to highlight and what to remove so that I would not run over the three-minute time limit.

(5) Prior to that, what was your experience of pitching? It’s not the same sort of pitching, but I think life is full of pitches, big and small.

(6) What did you learn from the event? A huge amount about business. As I come from an engineering background, this is a new world to me. I’m constantly inspired by all the passionate entrepreneurs I meet! (7) Why do you think you got through to the semi-finals? I think the judges liked eFOLDi as a product, as well as the fact that we have managed to bring it from just a great idea into a reality. (8) What went through your head when you were told you had made it to the grand final? A mixture of feelings, but mainly excitement! It was recognition for the four years of hard work, which I now feel wasn’t wasted.

(9) You’re going to pitch to Richard Branson – what will you do to ensure you impress him and the other judges to win? Just be myself really and show them how eFOLDi can help people. I also think it’s important to tell them the journey we’ve been through to get where we are today. (10) Should you be victorious, what’s the big ambition for the company over the next year and then five years? As sales become stable with sufficient funding, SunTech will continue to make improvements to eFOLDi, especially around weight reduction and the integration of IoT (Internet of Things) technology. At the same time, SunTech will also invest in R&D of other innovatively designed products for UK customers, with the intention to improve convenience, efficiency, enjoyment and the quality of people’s lives. In five years’ time, eFOLDi will be a well-known brand that stands out from the crowd for its value and the difference it can make to people’s lives. During the same period of time, SunTech would be taking social responsibility, creating job opportunities for disabled people, and aim to get more and more involved in charities dedicated for people in need: children, the elderly, people with disabilities and beyond! By Zen Terrelonge From 3,000 entrants, these are the six SMEs chosen to pitch to Richard Branson at the £1m VOOM 2016 finale.