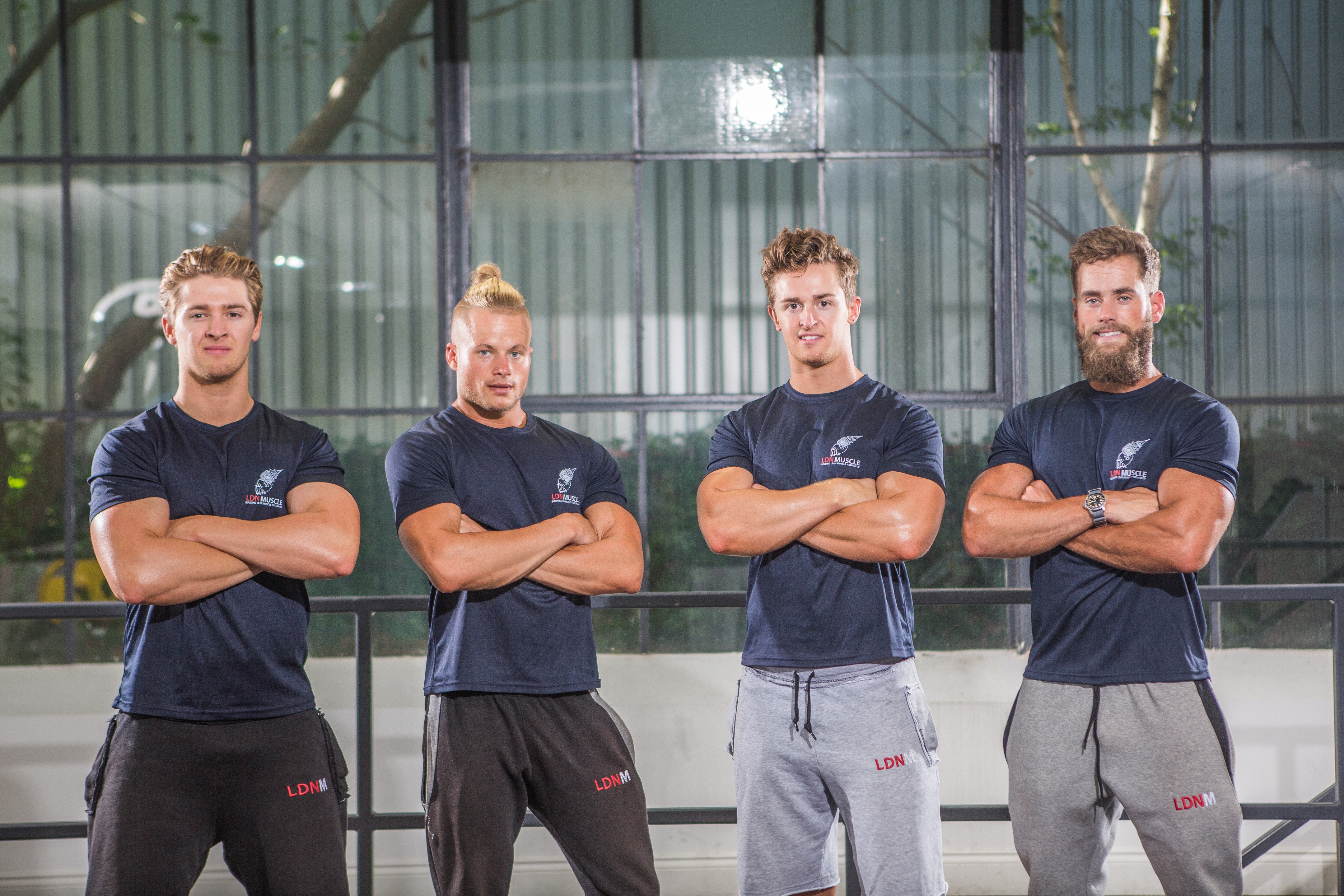 Usually, when an individual decides to make a go of a business idea, particularly when it gains traction, it means relinquishing their existing career and taking on the mantle of entrepreneur.

For Tom Exton, however, he?s still in possession of a full-time occupation as a city banker, despite having the finances to warrant leaving to concentrate on his three-year-old online workout guide business all hours of the day. ?The other guys are full-time,? he explained ? something that allows him to hold down a balance with his job at a city bank. ?Before work I?ll do an hour for LDN Muscle on emails, then there?s an hour lunch break and from 5pm-6pm onwards I?m working on the business till 1am-2am,? Exton said. Unsurprising, he said he doesn?t get much sleep and described the arduous routine as ?not pleasant?. As a result of the busy schedule, Exton?s own training regime has been impacted somewhat, as he is so busy selling the exercise expertise of he and his co-founders, admitting 45-minute workouts are squeezed in as and when. LDN Muscle started as a hobby when he and twin brother James, alongside friends Max and Lloyd Bridger ? also siblings ? begun training together at university. People were always asking what they ate, which was inspiration to start a blog as a means of sharing that information.

Having replied to every question, things spiralled for them and the Extons and Bridgers were quickly aware within six months that they could make a profit from their knowledge instead of giving it away. They realised that to take it to the next level and continue to dedicate their lives to the cause, some money had to come through the business.? Three incredibly comprehensive digital guides (?59-?85) were developed, the Bulking Bible, Cutting Guide and Bikini Guide, while more than 100,000 copies have been sold worldwide. And though you may think 20-somethings getting ready for wild holidays with friends would be their bread and butter, LDN Muscle has managed to become remarkably ageless. ?We don?t really have niche. Our customers include everyone from partners in law firms to people who have just left school ? it?s crazy really. That means we?ve got middle-aged men looking to lose weight and young guys who want to get shredded, enter competitions and so on; there?s massive variation,? Exton said. ?Then there?s our Bikini Guide for women. We didn?t want to hammer a specific niche ? we wanted to be mainstream and help as many people as we could.?
Commenting on what he thinks has allowed the company to achieve that mainstream appeal, he added: ?The key has always been replying to everything. We give customers and non-customers the same level of service.?

Lean, green and powerful – Tesco has made a Hulk-like smash with creative flair and data

While he is spending time in banking and fitness, brother James put his law career on the back-burner to run LDN Muscle full-time. Meanwhile, Lloyd completed a chemistry degree and set out to join the Marines, but having deferred his application twice, he too is now in the company full-time. His brother Max, the youngest, joined straight of university. Aside from the four founders, the fifth person who joined the team takes care of the IT department ? an essential element of the firm?s online enterprise. Elsewhere, someone has been put in place to take care of the LDN Muscle Academy ? a training-based division of the business, which gives aspiring fitness industry workers the knowledge they need to become personal trainers. ?In time there will be opportunities to take on graduates from the Academy, but at the latter end of the year. Given that we?re online, we don?t really need staff as much as a traditional business ? like a gym, for example,? said Exton. Launched in September, the Academy was launched because the founders knew that, as PTs themselves, many establishments qualify people ?without them reaching an adequate level?. Believing there to be room for improvement, LDN Muscle wants to deliver candidates that can apply for jobs with a trustworthy name behind them. ?There is so much saturation out there and some courses are appalling, which is worrying. We wanted to have PTs qualify with us and we don?t let people pass unless they?ve reached a certain level,? Exton detailed. With courses varying in prices of between ?250 to ?2,800, depending on the qualifications, there are flexible options on the table for trainees, while this looks set to be a lucrative expansion for LDN Muscle. Refusing to stand still, another money-spinner arrived this year as the company pushed into the supplement market. Speaking both passionately and frankly, Exton said: ?On the supplement side, there are a number of companies, even big players, selling false promises. They?re using ambassadors that are not natural and flogging products with no way of helping anyone,? highlighting the taboo area of steroid use.

?We?re not in bodybuilding shape. Most guys want to be a bit leaner and that?s the key behind it all.? Heavily against illegal methods, Exton said the idea behind LDN Muscle is not to sell lies or false hopes, but to help people become the best versions of themselves. He noted that he and the founders all have realistic and achievable physiques that can can be gained with hard work and dedication. ?With our range, there?s no shady stuff. Supplements aren?t the be all and end all, but it?s what we use. We never say ?have them?, they?re always optional ? we?re very hot on that,? he reasoned. Across the business overall, year one?s turnover was ?240,000 and that more than doubled for year two to ?560,000. The third year?s forecast is set at topping the ?1m threshold ??unsurprising given the company?s strategy to support all areas of the fitness market. ?At launch we had zero overheads and no staff, which converted into a decent profit. There was no eureka moment when it happened to work for us, it just did. The point the results came for us was around four-five weeks into plans when people started posting pictures of progress, so others then realised it worked,? said Exton. Indeed, with the supplement range launched in May, production has already been doubled to meet demand. That combined with existing online coaching and physical training courses, another area the company is looking to generate revenue from will be an expansion of its clothing range.

?We got into this business at the right time. I think that was really when it started. If we started today, the market has already changed as the world and its wife doing what we are, I?m not sure we?d have the same growth,? opined Exton. Of course, the world and its wife would include the Body Coach, another online coaching business. Founded by Joe Wicks, the popularity of the service has rocketed, with social media the secret weapon for his growth strategy. Exton admitted that Wicks is ?smashing it? and demonstrated there is professional respect as both businesses are set on fighting the obesity crisis. He added that there is crossover too, as some Body Coach users progress to join LDN Muscle ? the former tends to deliver workout options at home, while the latter is primarily gym-based, making it slightly more advanced. While the LDN Muscle journey sounds seamless, Exton said that, with four founders, all of whom are different characters with different ideas, means that sometimes something?s got to give and compromises must be made. Ultimately though, everyone has the same goal ? and that?s generating a worldwide user base. ?We view our guides as being the PT in your pocket,? said Exton. ?80 per cent of customers are in the UK and 20 per cent around the world. We?ve sold in 156 countries ? I didn?t even know there were that many! We?re experiencing downloads in places I?ve never heard of.?

Guides could experience even further download attention too, as LDN Muscle has launched a paid app, created by the same team that built Deliveroo, which offers exercise tutorials and programmes. ?It?s not a core part of the business, but a nice add-on and value proposition for customers,? Exton said. Looking ahead, the team will be getting involved with live events while continuing to spread the honest word about a healthy approach to fitness. ?Fitness can almost be an illness and a lot of firms are selling false dreams. There is no voice out there saying that?s rubbish,? Exton said. ?But we?re the people to shout about being natural and winning an attainable shape, for people to say ?I?d like to look like that?. Nobody is saying the truth ? but for us it?s in our blood and it?s great to provide a real voice.? By Zen Terrelonge

We investigated the boutique fitness sector to find out the impressive way in which it is squaring up to gym chain giants.