The Amazon Growing Business Awards 2017 is open. Taking place on Wednesday 29 November at The Brewery in London, entrepreneurs across the UK can nominate themselves and their businesses for the chance to win big on the night.

From its launch in 1999 with the CBI, which is still a fixture in the event that’s also supported by private equity firm ECI, the Amazon Growing Business Awards 2017 will remain true to its roots by celebrating British businesses and the exceptional achievements of the founders behind them.

Reflecting on last year, we saw Chinese takeaway operation Hotcha win Growing Business of the Year: Smaller Company (turnover up to £10m), while action-packed day out operator Go Ape secured the title of Rural Business of the Year, showcasing just how diverse the awards ceremony is.

The nominations window for the Amazon Growing Business Awards 2017 will be open until the deadline of Friday 15 September 2017, giving business leaders an ample amount of time for a shot at glory.

And with glory in mind, Amazon UK alongside Capital Economics and Enterprise Nation have revealed that, while SME confidence in Q2 2017 following the general election fell, leaders believe that they can double revenue growth over the next year.

That entrepreneurial determination, which is more important in today’s climate than ever, is exactly what the Amazon Growing Business Awards 2017 will recognise.

For the rising stars finding their way amidst the uncertainty, there are awards for Young Company of the Year and Young Entrepreneur of the Year.

Meanwhile, there are also accolades for established SMEs forging ahead with growth and revenue, as well as those succeeding in areas such as exports, looking beyond these borders to achieve success.

“SMEs clearly see the overall economic climate out there as cause for concern, but there’s also plenty of light amongst the shade,” said Doug Gurr, UK country manager, Amazon.

“SMEs are once again demonstrating their importance to the UK economy by keeping calm and carrying on, anticipating revenue, hiring and profit growth as well as ramping up capital investment.”

Don’t miss your chance to celebrate your company’s achievements – get nominating on the Amazon Growing Business Awards 2017 website now. 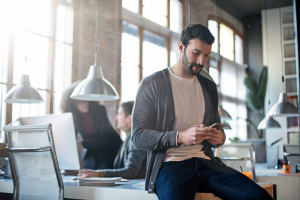 So, who is responsible for application security within cloud infrastructure?