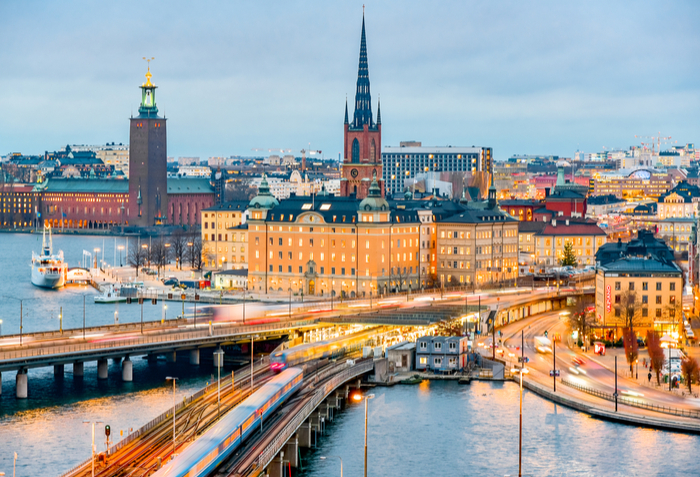 Share via
The Scandinavian obsession in our culture has been running rife for a while now, influencing”TV viewing habits with the likes of Bron (The Bridge) and The Killing, to the way we design our homes with flat pack furniture. And while most of Europe has struggled to fully recover from the 2008 economic turmoil, Nordic countries have stayed afloat and even accelerated in growth. Fromcompanies IKEA, Ericsson, H&M, Electrolux and Volvo, to tech leaders Niklas Zennstr?m (Skype), Martin Lorentzon (Spotify) and Daniel Ek (Spotify), as well as concepts Hygge and Lagom spreading like wildfire, it’s safe to say Scandinavia is behind some highly recognisable global brands and trends. But forget IKEA and H&M, in the last decade alone, we ve seen the likes of Spotify, Skype, Rovio (the software developer behind Angry Birds), cheap flights finder Momondo and sports app Endomondo (recentlyAcquired by Priceline Group for $550m and Under Armour for $85m respectively) explode out of the Nordic region. There are no signs the trend is slowing down. From a funding perspective, many venture capitalist firms have profited from investing in these tech startups and are continuing to support these growing companies. So what it is that makes Nordic countries’so successful when it comes to innovation and technology” Many credit tech success to structural advantages. For example, in the 1990s, the Swedish government invested heavily in broadband and personal computers whilst Sweden’s generous welfare state reduces financial risk for founders and early employees. There’s even a tax deduction for people who privately invest in startups. In Denmark the income tax in the past few years got significantly reduced to £22?per cent. And although this may be partially the reason, the collaborative element and the organisational structure in the Scandinavian culture with its emphasis on?work/life balance shouldn?t be ignored. There is something about the Scandinavian mentality that builds thriving teams, something most startup bosses, regardless of origin, could benefit from adopting into their culture. Silvia, manger at an affiliate marketing company which accumulates best bonus offers from UK bookmakers?” it operates a flat structure and flexible working hours” said:?According to the latest OECD findings, it’s been suggested that people in Denmark devote 68?per cent of their day, or 16.3 hours, to personal care and leisure. Startups need to address a market rapidly and cut through the noise with a sharp product. At this point in a company’s life, the team has to be motivated by a common goal with personal goals taking a back seat. Decisions must be made fast, and problems often have to be solved outside of what the organisation has been structured to address. A non-hierarchical and collaborative culture where employees can move in and out of different roles to solve customer problems in real-time is one of the reasons why startups in Nordic countries are so successful. Out of all the Scandinavian countries, Sweden is leading the way when it comes to success stories; between 2000 £2015, Sweden saw 263 exits at a total value of $23.7bn leaving Nordic countries Norway (75 at $10.5bn), Denmark (58 at $7.4bn) and Finland (91 at $6.3bn) far behind. In 2014 alone, Sweden contributed to 50 per cent of all exits in the Nordic region. In fact, Nordic countries?represent two per cent?of global GDP but has accounted for almost ten per cent of the world’s billion-dollar exits over the last decade. More than half of these came from Sweden. This recipe for success is definitely worth studying. Whatever the secret ingredientis, it’s a fact that Scandinavian startups are topping the list. “There are plenty of startup accelerators programs, non-profit organisations and business Angels , said Gulnaz Khusainova, CEO and founder of the EasySize, a Copenhagen-based online retail solution provider. Some three years ago,?Khusainova?was accepted for a business accelerator program in Copenhagen and moved from Russia to start her company in Denmark. Fun facts: Danish StartupBootCamp is Europe’s largest network of support programs for technology startups. The network, established in 2010, annually conducts more than 100 qualifying rounds in 35 countries, helping entrepreneurs attract investments, in return for eight per cent ownership. And in Finland, the gaming industry has seen its turnover increase 20-fold since 2008. So, if you’re looking for “the next big thing”, it may either be time to head North, or find out how you can implement their success.