Reports suggest it was the toughest year for the ad sector since the financial crisis, and as the tech giants take over, we’re guessing the Cannes ad-land yacht parties won’t last much longer – but quite frankly, we don’t think that’s a bad thing.

Unilever and P&G, once major advocates of advertising budgets that got renewed every year based on the previous year’s spend, have now adopted zero-based budgeting.

After P&G cut $100m from its digital marketing costs in the second quarter, they saw no change. Jon Moeller, P&G CFO, stated: “We didn’t see a reduction in the growth rate [in value or volume of sales]. What that tells me is that the spending that we cut was largely ineffective.”

Brands like Unilever and P&G know they have to adapt to a creatively open, evolving future and that’s why they are refusing to be railroaded into repeating what they’ve done in the past. Recognising change is one thing but making the change to the ad sector is what brands need to do next.

In the new commercial ecosystem, investors can track and scrutinise every cost and they simply won’t tolerate waste, fraud and lack of transparency. Customers’ patience is wearing thin too with intrusive, irrelevant and unwanted digital advertising. I’m currently being chased around the web by a Vodafone ad, even though I’m halfway through a phone contract with another provider.

This uncaring, impersonal advertising is wasting people’s time, money and talent that can, and must, be put to better use. By changing the status quo, brands will become fit for the future.

Sorrell, an accountant by trade, is right – these are some of the issues that are causing a decline for the major networks. However, he skips over the main issue, the issue he won’t want his shareholders to think about – people don’t like advertising.

Consumer behaviours have changed and research shows people do what they can to avoid the ad sector.

In the past, the advertising industry could prosper by telling customers what to desire and buy. Being in control of the agenda, they could simply offer a tweaked version of the same business model year on year, with only the shallowest reference to the customer.

The mobile phone has changed everything.

Media consumption has moved away from traditional advertising such as newspapers, billboards and the back of cereal packets (which on the whole were consumed passively and didn’t disrupt your day). The attention economy has changed as we choose how, where and when we consume our media content and, as we watch Netflix, browse the web and use our mobiles, we have it all, literally, at our fingertips.

This means brands are having to do more and more to guarantee our attention to their message. Their response has often been to prevent us from accessing the content we actually want unless we watch an ad first, and its commonplace to have an ad take over your entire screen.

This ad sector behaviour has created an ever growing appetite for ad-free environments, where banners, pop-ups and auto play videos don’t interrupt people as they shop, search and browse online and nearly half of young millenials use ad blockers.

Even the biggest ad platforms are trying to signal to brands they need to behave better with their users, with Google, Apple, Facebook and Samsung prioritising user experience by offering new ways to limit intrusive ads.

Disruption is not temporary

Sorrell believes that current disruption to the ad sector is transient.

As the digital landscape changes and new tech emerges, ad sector agencies are famous for being able to adapt and evolve to take a brand’s message and push it through whichever new medium is trending.

Despite agencies and brands adapting to new tech, their message and behaviour does not change, and this is the problem. Agencies are still shouting at consumers about brands and what they do: interrupting and selling, rather than offering any utility.

Consumers don’t want this. Old models of one-way “tell and sell” are not fit for purpose in a digital age.

We are moving on to a world where consumers are spending time in digital experiences that are provided free by a key group of players such as Facebook, Instagram, WhatsApp and Google Assistant. Increasingly, that’s where customers “live” for much of their day and what they offer is welcome and relevant. That is how brands need to invest their time and energy – in technology that gives people the experiences, insights and connections they actually want.

Now, brands have the opportunity to connect with their customers in ways that are relevant and empowering on both sides. But this will only happen if they are brave enough to work with partners that are innovative, disruptive and agile. Partners that have the foresight to embrace utility over annoyance.

AI is facilitating the tech-driven experiences that users will come to expect from brands in the future. From personalised recommendations to interactions that inform and entertain. It’s about offering a service rather than just pushing products and messaging.

The ad sector challenge is – can these global networks change in time to survive? It’s definitely possible, but they’ve never had to change this much before.

Rob Bennett is MD at rehab

The iconic adverts you will never forget – even years later

Growing up in the UK, iconic adverts were limited to television and print. The age of digital advertising is ever-present today, yet the images and messages conveyed in those adverts are still alive, stored as memories that make an appearance whenever prompted.

Jamie Waller thinks we should all appreciate unsexy businesses more 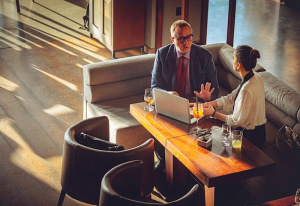 Things to do before giving advice as a manager