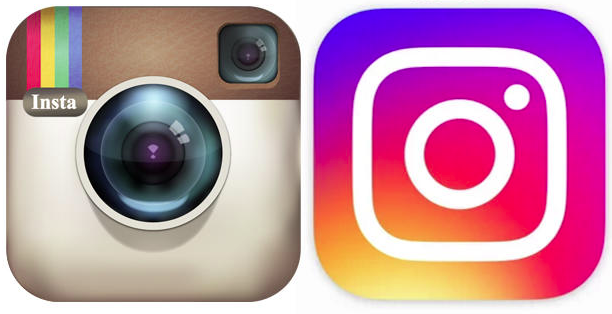 Instagram has been adopted by the young, the creative and the expressive as a means to capture and share moments, and in some cases has even provided its users with a business model. Joe Wicks, The Body Coach, started his now stratospheric career by posting 15-second Instagram videos of his healthy meals and workouts.

The meteoric rise of Instagram is indisputable. But how credible is it that this can be linked to the dramatic change to the logo? Moving completely away from the retro nod to the polaroid camera, the new design is minimal and vibrant, in line with other app logos such as Whatsapp and Google. Essentially, Instagram has followed the pack, which could be seen as a short-sighted move in a world where smartphone screens are jam-packed with minimal, vibrant app logos. The danger is that by opting to be in line with its peers and competitors, it could easily get lost from a design perspective. What prompted the mass move to simplistic designs is the decision by the major operating systems to drop the idea of skeumorphism, i.e design resembling the object it represents. This decision led to other social media platforms flattening and simplifying their designs, turning instead to bold, minimal icons. Initially, Instagram was left behind by this shift, sticking to its camera logo which was a direct reflection of the services it offered: retro-style, instant photo editing.

Yet this shouldn’t be seen as a negative (no pun intended). Actually, by staying still, Instagram stayed true to its vintage roots, echoing its values and its brand identity. Perhaps this was intentional, perhaps it wasn’t, but it worked – which makes the new branding even more disappointing.

Like most things, if something stays true and single-minded over time, it has as a feeling of integrity – a bit like vinyl. But the moment a brand decides to abandon that defiant stance and follow the trends set by others, it begins to compromise its sense of self, therefore making the design less impactful.

There’s no doubt that Instagram’s new look will not stop people from using the app, and to give the brand credit, its position as a social phenomenon means that the brand is bigger than the design, and will continue to thrive regardless. But is that the point? When a brand is strong and successful, it deserves to have a design and visual identity that matches that level of success. It seems a shame to sacrifice something as powerful as design purely to fit in with the crowd.  John-Paul Hunter is creative director at strategic brand design firm Webb deVlam

While Instagram may have fallen short with its new look, when it comes to branding (and customer satisfaction), Domino’s delivers