I neglected, and or failed, during the life of my business to surround myself with a really good management team.

Firstly, it was a size issue. As our initial growth period slowed, we stayed stuck in the 20-40 staff size, where you still have neither the need nor the money for a seriously senior management team, but equally it is far too big for one person to run on their own.

For the first ten or so years, I had highly skilled, extremely nice people at the top of the manufacturing side on the premise they had the most skill.

They had also evolved quite unique ways of making, which gave us our competitive edge. But we had ended up together by chance when I bought out the company they worked for and, through no fault on either side, what we wanted for my company and the future was entirely different.

They had no desire for it to grow, no wish at all to manage other people. To make matters worse, as we grew, the staff problems expanded and the man management issues needed very strong management skills – which was absolutely not their thing.

I clearly wanted the company to grow, and could not fully understand why they did not. I couldn’t imagine the company without them, but equally it made both them and I increasingly unhappy.

It ended, almost inevitably, with increased strain and acrimony on both sides, them leaving, and the company left pretty high and dry on the skills side.

It was a textbook lesson in why having a management team not buying into your goals brings a business to its knees. We should have been able to sit down and talk it out.

This all came to boiling point on the back of my son emigrating, when I was in a very bad place and for once seeing no point whatsoever in the business. The company was sick, the boss was sick, we were short of skills, short on managers and had increasingly difficult staff issues.

After this, I set out, over what would be the next eight years or so, on a path of attempting and failing on different ways to form a decent management team.

Geography also played a part. We had moved to an industrial town with an extremely poor reputation. High fliers tended to leave altogether. It was a town that did not attract incoming talent. Its industries were hugely male dominated, sometimes second generation.

I tried re-training myself, loved it and tried to share the knowledge through mentoring-up various in-house teams. But while these in-house mentees may have wanted the power, they were singularly dis-interested in the knowledge.

The poor quality, anti-establishment, misogynistic recruiting ground made trying to nurture and train up a junior team a continual nightmare. The very few with genuinely good intentions were quickly annihilated by peer pressure. It was a shame, in more ways than one. I was extremely passionate about giving opportunity on the merit of potential where it might not otherwise have been given, but very few gained from it.

I tried seasoned professional managers. The furniture industry has a great many dinosaurs within it, and I made the error of finding more than one. These were men who were convinced they could shove the little woman home (me), were distraught and ineffectual without their own secretaries and who spent their time swanning around the shop floor when they weren’t flirting and making hugely inappropriate conversation with the sales girls.

They had no interest in modern management styles. These guys had forgotten more than they knew about the nuts and bolts of furniture making, and were quick to be found out on the shop floor.

Nor did the shop floor take any prisoners when I recruited managers with management strengths but no furniture knowledge. Running rings around them did not come close. Plus, recruiting these management skills was predictably quite expensive and did not even help the skills shortage we had been left with.

On top of all of that, female managers became immediate targets for control by the shop floor. They were instantly objectified and disrespected – with many falling comfortably into this familiar pattern.

In the final couple of years there was just myself and one right hand, which was far from enough. But we were broke, and there was not a solution or angle we hadn’t tried several times over. We were also too busy firefighting and trying to cope with the massive skills gaps.

It is only with hindsight that I can see how many of the problems were routed in the culture both of the area and the sector, where sexism and class prejudices abounded. In the early days I was naively oblivious to it all. 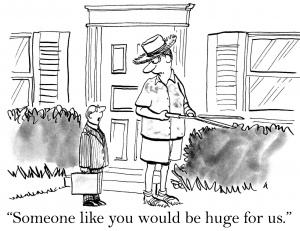 Hiring an external CEO can be a piece of tactical masterclass