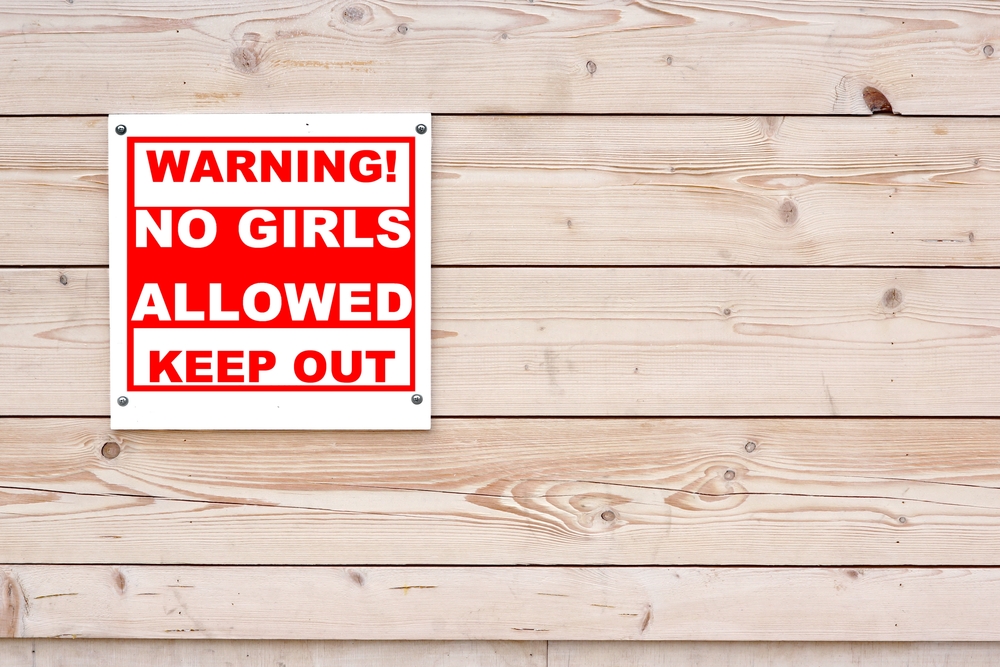 Share via
In this series, we look at workplace norms that push the gender divide further, and how you can build an inclusive culture that helps everyone bring their best selves to work. “It’s just bants, relax.” Even in this day and age where being ‘woke’ is the new norm, lad banter and office humour is still a dividing factor in most corporate environments. What is seen as normal workplace bonding can actually make women and minorities feel alienated in an environment where they are expected to feel and behave authentically. But how do you feel authentic and connect with your colleagues if they exclude you on the basis of your gender or ethnic background Ironically, more men than women believe that toxic masculinity in the workplace is a major barrier for women to professionally progress, according to new research from Equality Group. Many off-key jokes fly by under the guise of harmless ‘banter’ which can make employees outside the dominant group feel excluded by merit of who they are. If a group of employees have a running joke about the attractive office receptionist, how is the one woman on the team supposed to react” Does she jump in with the comments to fit in, or speak out about it and risk being seen as as wet blanket” Or worse, she may be dismissed as being over sensitive (“Can’t you take a joke, Susan?”). And it works both ways. In a predominantly female work environment, it’s important to keep ‘girl talk’ in check, too, not to risk excluding the few men on the team from feeling like they can add to casual conversation as and when they’d like.

21% of employees in the UK find their workplace environment is dominated by a masculine culture that makes it harder for women to professionally and socially progress.

Compounding the issue, 28% of Brits don’t want to report incidences at work because they are worried it will negatively impact their career progression or create an uncomfortable working environment, according to the same Equality Group study.

When is workplace banter not okay?

Humour provides many workplace benefits. Laughing and joking can strengthen mental and physical health and promote social bonding, which in turn can boost productivity. It is essential for employees to know how to enjoy themselves, even if it is a case of making the best of a testing environment. Most SMEs pride themselves on their casual work culture and friendly environment as the main reason why talented people choose to work with them. But banter can be harmful when it excludes people and builds silos.

“Although humour may offer many benefits, it is important to remember that, as with anything, individuals harbour different tastes, which can affect what they may or may not find funny,” says Harriet Heneghan, director and executive coach, EMEA at Black Isle Group.

“In a possibly tense workplace situation, it may be tempting to dissipate stress through humour, sometimes at somebody else’s expense, even if the aim is to strengthen bonds and not to offend.”

As business leaders and professionals, when is it time to step in and ensure banter isn’t offensive, while not rendering the workplace free of humour altogether?

According to Heneghan, the first step is to encourage a safe environment in the workplace, where team members can be open and honest with each other. “A safe environment will engender feelings of mutual respect. Encourage banter to be kept within social norms, alleviate power inequality between members of the team which can risk banter being or being perceived as bullying, and enable banter to be self-policing or policed by encouraging individuals to speak out immediately and constructively if and when boundaries have been or look like they are being crossed,” she explains.

How to encourage a safe environment

“In such groups, banter and teasing can come quite naturally, and be used effectively to increase group cohesion, productivity and success,” says Heneghan.

While for some groups these positive behaviours may come naturally, for others, conscious steps can be taken to role model and encourage the desired skills and behaviours.

Training and assessment to develop good listening and communication skills within a team will naturally instil mutual respect and understanding between team members, and, ultimately, encourage a safe environment.

“This respect and understanding will not only encourage team members to be more open and honest with each other, it will tend to limit the opportunities for harmless banter to stray into undue offence.”

Develop an ear for off-colour jokes

Context matters, says Heneghan. Imagine your humour and banter being read out in a barrister’s crushing tones in front of a grimacing judge.

“Stripped of its context in the jokey back-and-forth between workmates, anything close to the knuckle is going to sound that much worse,” she says.

“Another good rule of thumb for written humour directed at others is for team members to consider whether they would be happy for the head of HR to be copied in.”

There are certain behaviours which will make it more likely that humour and banter will lead to offence. Obviously, this will be the case where the banter discriminates directly or indirectly on the grounds of race, gender, sexuality, disability, or which strays into harassment and bullying, says Heneghan. “Such conduct may not only trouble the lawyers, it will also destroy team cohesion and, in the long run, performance.”

But intention also should be taken into account. Banter which might otherwise be considered acceptable may become unacceptable, unhelpful or destructive to team cohesion as a result of the manner in which it is delivered or received.

This might occur where, for example, the humour tends to be consistently directed at one member of the team, or if an individual is demonstrating signs of vulnerability. Humour falling short of a legal discrimination or bullying claim may also become unacceptable if directed (often repeatedly) at some physical or mental aspect of the recipient.

“Crucially in business, it can also occur where there is a significant difference between the seniority of the joker and the object of the joke.”

Keep in mind that banter may also become unhelpful where the participants are strong characters but engage in it with such vigour that it is damaging and distracting not just for them but also for other members of the team.

In all of the above situations, waiting for or even encouraging people to speak out when they are offended cannot be relied upon, Heneghan warns. Junior and less resilient members of a team, for example, will naturally feel less able and less inclined to raise offensive conduct as an issue.

We see this in Equality Group’s study, which reveals the reluctance of people who say they regularly feel offended at work to do anything about it.

The onus is on senior members of staff to step in proactively, call out the behaviour and offer appropriate training where relevant.

“That training should cover listening and communications skills, while also making the recipient aware of workplace policies covering diversity, discrimination and the like,” Heneghan adds. “Furthermore, team training in emotional intelligence can achieve surprisingly successful results.”

Within the UK workplace, it is evident that men significantly outweigh women in management and decision making positions and because of this, Equality Group founder Hephzi Pemberton believes it’s time for businesses to take on a zero-tolerance policy for gender-based misinformation. This starts with clearly defining inappropriate behaviours, setting boundaries and educating employees on what’s just not okay anymore. As a society, we should be striving to stamp out harassment, bullying and inappropriate behaviour in the workplace by creating and implementing positive policies,” she says. “While the situation has almost certainly improved, there are still a number of steps that workplaces need to take to improve their working culture.”

“Men and women alike need to understand that it is not enough to simply want a positive and progressive culture, you have to acknowledge your own power in creating it.”

Given the acute under representation of women at board level and beyond, bringing men into the conversation may be the best way to address the gender deficit in the work context, she adds. “It’s only then that true processes can be implemented to eliminate the presence of inappropriate behaviour across the nations workplace culture.”

Be careful not to crack down too hard

Let’s hope that common sense will prevail, and that constructive humour, banter and teasing are not to be banished from the workplace entirely, says Black Isle Group’s Heneghan. “If they were, not only would the workplace become a more sterile environment, the ability of team members to interact freely in a positive and cohesive way to the success of the overall enterprise would also be negatively impacted.”

“At its root, ensuring that banter does not become undue offence is about using our emotional intelligence. Kindness is key. Try to prevent offence in the first place, but be vigilant for it, and nip it in the bud.”

How do you deal with humour in the workplace Share your top tips and strategies on keeping things fun while getting work done for a chance to be featured on Real Business.