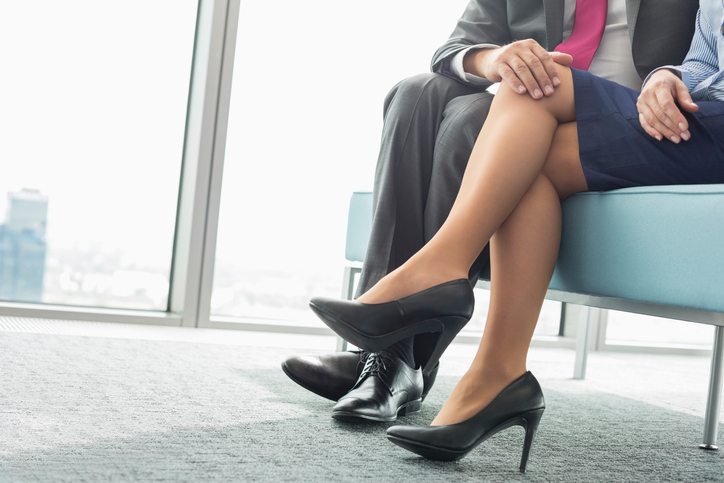 Share via
Turns out the office romance suspicion is well placed, however. A quarter of UK workers have admitted they’re currently dating a peer, though 43 per cent of those have kept the news under wraps, compared to 30 per cent that have trusted a few. The findings from Printerland reveal that a lot of, shall we say, collaboration goes on indeed, as a third of Brits have kissed a colleague, while a quarter have gone the distance and admit the office romance has resulted in them having sex. Seemingly, those that have a feeling an office romance is taking place can’t resist getting the gossip for some water cooler chat, as they admit stalking colleagues on social media to get the lowdown. With those sorts of problems in mind, many choose to keep their peer-to-peer relations a secret, as a third admitted they’re already involved with someone else romantically when the office romance started. Elsewhere, three per cent were in the midst of a divorce at the time. It’s not all doom and gloom though, as just under half of the 37 per cent of workers in an office romance have been coupled with a colleague for over 18 months. Ten per cent have even married their co-worker. Catherine Bannan, HR manager at Printerland, said: “As we all work such long hours, it’s not surprising that so many people end up getting together with colleagues – and it’s comforting to see that so many of the nation’s secret office relationships have resulted in a proposal! “The downside is, if you do start dating a comrade and it all goes wrong, you may have to work with that person for a long time, which could lead to a whole host of problems.” While engagement and marriage is a priority for some, other have less romantic gestures in mind. Some 11 per cent want to sleep with their boss, and ten per cent have had wild fantasies about the receptionist. Meanwhile, it turned out that men are the ones guiltiest of putting an end to the office romance, discovering they don’t like to work with someone they’re dating. As for location, it’s workers in Sheffield most likely to sleep with peers, as 31 per cent claim to have done so. Apparently the city has quite the benefits, as it was revealed the UK location with the strongest salary growth earlier in the week. Meanwhile, staff in Aberdeen are the least likely to fraternise with colleagues.