Skip to content
Interviews
Share via
It was Cordelia Meacher who founded the company, which was launched back in April 2012. Having worked in public relations for over 20 years, she became aware there was a better way to run a PR agency and, encouraged by existing clients, she set out to do just that. Employee one was Neil Robertson, a former colleague of Meacher?s, who is now a director at the company. Both he and Meacher joined Real Business for the latest of our Black Cab Entrepreneurs interviews, celebrating the business reaching the age of five in what is a competitive marketplace. ?People always talk about risk ? we both left safe, well-paid jobs in bigger agencies to do this,? he said. ?But for me it wasn?t a risk because I knew anything we would do would ultimately be successful because we?re driven enough to make it a success, and we know there?s a market there.? Opening with her rationale behind the launch, Meacher said: ?Having been in so many different agencies and seen how PR people behave, they don?t understand a story, they don?t understand what a journalist is looking for, and they don?t understand it?s about relationships. ?Largely, they stick a press release to all and sundry and think that?s doing a good job for a client.? Robertson backed up that point and added: ?They?re just trying to achieve a coverage number because they need x number of coverage each month. But it?s just any old bits of coverage, what?s behind that? What?s that doing for the client?? The concept behind FieldHouse Associates was simple ? do the opposite. With a focus on technology and investments, the team at the five-year-old agency actively tend to the customers? individual needs, which is seemingly uncommon in PR. So, whether it?s an investment or recruitment support, FieldHouse will act accordingly. ?We turned that usual approach on its head and rather than say to clients, ?how many pieces of coverage do you need to have this month?, we?ve said ?what impact do you need us to have for you?? Meacher explained. ?That could be a funding round, or they may be looking to hire people. So, for example, with hiring in mind, if they?re specially hiring marketing people we?ll target marketing press, or hiring developers then we?ll target tech press.? Robertson added: ?Also, a big part of what we offer, unlike other agencies, is network. We really know the tech and investment space, so we can make introductions direct. As well as helping with getting press coverage for impactful reasons, we can also say it would be useful for you to meet so and so ? not because we work for them, just because it?s useful and gives back a bit. ?As a VC, you might need to know a good IP lawyer for your portfolio company, so we can make that connection. That doesn?t come through media, but direct relationships.? And if that impact isn?t delivered in six months, the PR agency will either change the strategy or welcome losing the account. Find out what Meacher and Robertson had to say during their Black Cab Entrepreneurs ride: At launch, despite concerns over no clients from Meacher, VC firm MMC Ventures was the first account on the books, followed by web software company Bag That and Internet of Things business EVRYTHNG. ?Once you can demonstrate you have an impact on their business then it becomes a different ball game,? Robertson said. ?It?s not just PR, it?s ?this is having an impact?. Meacher explained that a USP of the business is its focus and the fact FieldHouse is not a PR agency for just anybody. ?We?re specifically for high-growth tech businesses and their investors, as well as the community around them, so law firms and corporates. There are financial PR agencies, corporate PR agencies and tech agencies, but none do all three ? and none are wholly focused on high-growth businesses,? she said. ?We always say we?d never work with a British Airways or Nestl? but if they had an innovation or corporate venturing arm, that?s who we?d work with because they?re trying to do something differently,? Robertson added. While clients rolled in easily, the main challenge for the business was hiring. Once they?d brought in people from their networks, taking on less experienced staff was the tricky part. 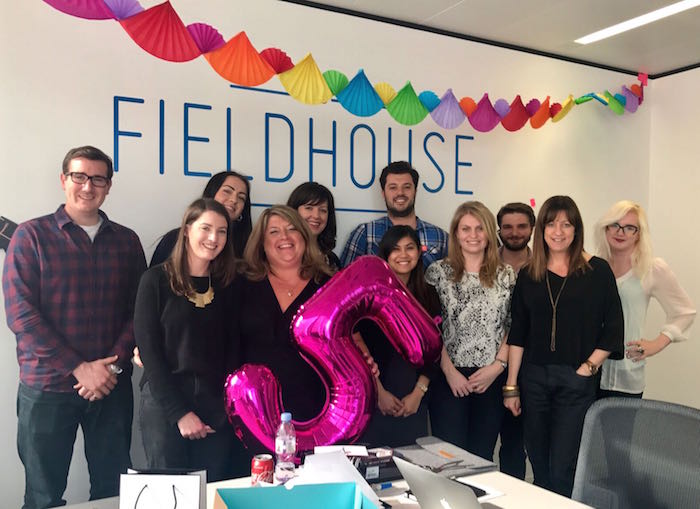 Unlike seasoned PR agency professionals, newbies wanted proper structures in place, with the stereotypical beer and bean bags set-up ? which was at odds with hot desking in co-working spaces. With a solid recruitment strategy in place as the firm now tips over the 12-employee mark, Robertson noted that FieldHouse actively encourages staff to make connections, not just for the company?s benefit, but their own too. ?We want people interested in building their own network ? we?ve done that over the past ten to 20 years, but in other PR agency environments, they don?t let their junior team go to events or build their own network. So, how will they stand up and do this job for themselves?? he said. Meacher added: ?We have no limit on expenses for entertainment. In fact, I?m quite disappointed if I get expense forms at the end of the month and they?ve not been entertaining journalists or clients or prospects. I want to see that spend!? Additionally, the chance to travel is encouraged. If staff can build a worthy enough case to fly out to SXSW, for example, the opportunity is there. Monetary incentives are also provided, as they will receive ten per cent of the client fee from any new business they bring in through their own network for a year. There?s also a five per cent fee for the year for anyone that brings in new business through the FieldHouse network. Christmas bonuses are also part of the package. Reflecting on standout campaigns over the past five years, helping tech startup Chirp achieve 188 per cent of its crowdfunding target was cited by Robertson. He also said working alongside EVRYTHNG to promote connected clothing in New York was fun. Elsewhere, Meacher noted the PR agency helping Octopus realise its ambition to become a tier one VC firm, while MMC Ventures has become increasingly well known. Arguably, the crown jewel of clients, however, is the Duke of York. Indeed, Prince Andrew is in cahoots with FieldHouse, through his Pitch@Palace campaign. [rb_inline_related] ?We really proud of Pitch@Palace and working?with the Duke. As a little PR agency, it?s super exciting to have gone to?Buckingham Palace,? said Meacher. ?We make sure the right people are in the room, and we?re consulted on topics and discussions for the events.? Looking ahead to the next five years, the pair admitted they?ve had several acquisition offers to date, but turned them down. ?In PR terms, there?s an accepted level that when you get to 12 people there?s a change. You?re not just a small agency any more, you?re becoming a medium-sized PR agency and there?s a perception by the bigger agencies that you?re really there,? said Meacher. Roberston added: ?We?ve seen acquisitions done in PR that haven?t been done well, and others that have. But right now, growth is phenomenal and we?re having way too much fun.?