That Openreach will become a separate entity means, in some ways, very little – it will still be under the control of BT – but at least the FTTP revolution is coming along nicely.

Of Ofcom’s decision, Mishcon de Reya’s head of competition, Andrij Jurkiw, told Real Business: “While Openreach may have its own board and executive directors it will still be reporting back to BT, bringing into question its true independence. BT’s rivals will no doubt be disappointed that the regulator has not ordered a complete separation.

“In the short term, Ofcom’s announcement will make no difference for consumers. The process begun by Ofcom will now take time to work through and only if it is successful will consumers potentially see prices go down. Given the fact Ofcom invoked a very infrequently used procedure, we’re in unchartered territory with little indication of when we can expect a final outcome. So consumers wanting more reliable and faster broadband should not hold their breath, as it may be some time before this is achieved.”

That being said, Openreach isn’t standing still – it’s gearing up for a FTTP revolution. Its aim is now to deliver FTTP technology to millions of UK SMEs by the end of 2020.

It comes after, according to Openreach CEO Clive Selley, firms gave voice to the need for an alternative to dedicated lines.

“So that is exactly what is being provided with this new product,” Selley explained. “We’ve committed to doubling our FTTP footprint this year and we have already begun this work in nine locations across the country.”

Currently, work is taking place to speed up the FTTP revolution and make it available to 3,200 SMEs and 2,200 residential areas in, for example, Avonmouth, Bristol and Whitchurch. This will soon extend to Bath, Liverpool, Manchester and London.

One Bristol firm has already benefited from this expansion – Mathias and Sons, which produces branded corporate clothing.

“Responsiveness is a cornerstone of the business that was being hindered by our Internet speed,” said the firm’s CEO, Jason Mathias. “Following the new fibre installation from Openreach, we are now able to send designs and concepts to customers in seconds where it used to take ten minutes.

“This connection is a great step forward for us and not only makes us more responsive and efficient, but it also helps to future-proof the business.” 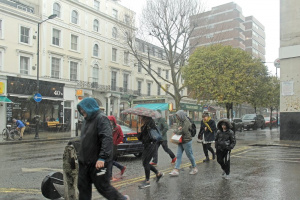 A nightmare before Christmas: Avoid a retail crisis this festive season

A banker’s banker rolling back the revolution?