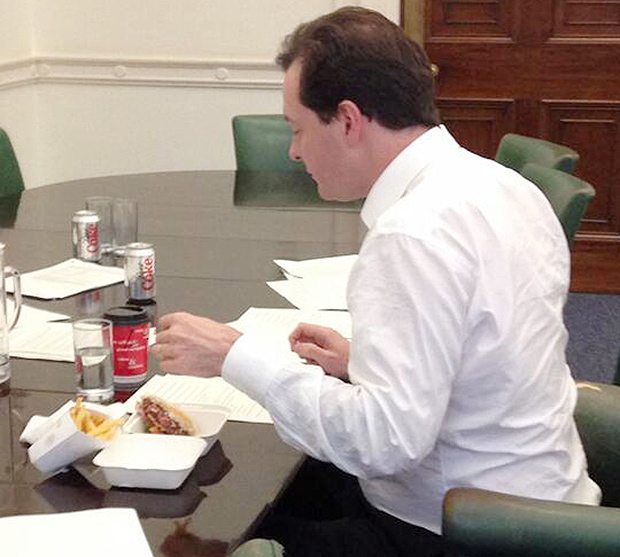 Where are you reading this column? Are you on the train scrolling through your iPad, sat on the sofa with your laptop with the soaps on in the background, or are you at your desk taking two minutes out before getting back to it?

Why do I ask? Well, the photo that Chancellor George Osborne posted on Twitter last week of him eating a burger while preparing his Spending Review speech got me thinking.

While most the country has been consumed by the debate over whether George should have gone for a ?3 Big Mac rather than a ?10 “posh” burger, I prefer to take in the context ? sometimes you have to work through lunch when there?s a job to be done!

Of course, the Chancellor was always going to open himself up to ridicule by posting the picture, but in my mind it demonstrated that he was serious about the job he was doing and sometimes there just isn?t time for the traditional “lunch hour”!

One of those random surveys from earlier this year revealed that the average worker spends about half an hour at lunch and 60 percent don?t take a break at all. This is blamed on the state of the economy and there?s a lot in that. The downturn has made us rethink the effort we put into work.

I think there would have been more of a furore if George had been pictured going through a McDonald?s DriveThru rather than putting the finishing touches to the country?s spending plans.

Now of course, this type of lifestyle isn?t for everyone. And that?s what separates the leaders from the followers, whether it?s in politics or business.

Of course, many are in business to make a better life for them and their families, but during the working day, their firms are their sole priority and maximising every second from that day is vital. If the recent recession has shown us anything, we have all had to fight that extra bit harder for every pound out there and that includes putting the hours in.

There will be many out there that will say what I am advocating is very unhealthy, and in some circumstances that could be the case, but it?s all about adapting. I swim every morning and whatever is going on in business I don?t miss my swim. I just have to get up earlier to make sure I have time for exercise.

Taking a break where possible is important; as I said on Peter Jones Meets the other week, I don?t want to be the richest man in the graveyard. However, I?m not naive enough to think that the rewards don?t come from hard work and sometimes that means eating “al desko” for the good of my business.

I don?t think the New Governor of the Bank of England Mark Carney will be looking at his schedule in his first week in Threadneedle Street with one eye on an hour-long break in the canteen ? he?s got a lot on his plate and it ain?t a bacon sarnie or a ?10 hamburger!