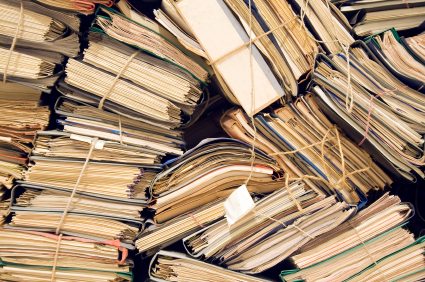 Last week saw the return of World Paper Free Day, but although Britons are continually reminded to be eco-friendly the idea of a paper-less office still remains a dream. Only one per cent of offices are completely paper-free, according to a study carried out by Iron Mountain.

Increased recycling and the introduction of tree-free paper has not had a huge effect on the paper market: paper making is still the largest user of fossil fuels in the world. Iron Mountain asked information leaders from manufacturing to pharmaceutical across the UK, Germany, France, Netherlands, Spain and Hungary and found that over 36 per cent of firms would describe their paper storage system as chaotic.  The wide availability of technology could lower the amount of paper in the office; tablets, smart phones and high speed broadband – not to mention email, ebooks and online document sharing – allow individuals to communicate without traditional paper based methods. However, some 51 per cent of firms in Europe keep the bulk of important customer information on paper. Paper is integral to our culture; bank notes, coffee cups and napkins all contribute to the three energy sins: deforestation, climate change and green house gas. We live in a world dominated by paper. In the last year there have been increased discussions in reference to paper-based media. Guardian readers took to Twitter to air their anger at a Telegraph article that stated the Guardian was “seriously discussing” an end to its print edition provoked a discussion about “a new age of digital paper”. The Guardian quickly dispelled this speculation as unfounded, but US paper Newsweek announced its transition to an all-digital format in early 2013 soon after. Microsoft Business are one of many companies who advise people wanting to become paper-free. Joseph Antony from Microsoft argues: “Many folks have made at least a partial move to a paperless office. Don’t believe me? Take a look at how many messages are stored in your e-mail’s in-basket. Now imagine how much paper would have been generated if they hadn’t come to you from cyberspace.” In spite of Anthony’s optimism, a paper-free office is not going to happen overnight. Large paper archives are overburdened and disorganised filing systems, making it impossible for businesses to harness the full potential of the information. Iron Mountain’s research showed an astounding  two per cent of businesses had no storage structure altogether, whilst 49 per cent are afraid of losing important information. Surely, a paper-led information system cannot be the way forward? “A paperless office may be an unrealistic goal for many, but a paper-efficient one is achievable,” believes Christian Toon, head of information risk at Iron Mountain Europe. “Companies do and will continue to create, copy and store paper documents.  “We would advise companies not to rush into a digitise-all approach, but to focus on understanding how information is used and then digitising the documents they need to access frequently. Businesses need to shrink the problem and focus resources on their most important documents, such as corporation documents, customer data and business intelligence.” These figures do not disprove the dramatic changes within business. There has been a clear move towards a more eco-friendly office environment. Islington Council saved nearly £200,00 a year by switching to e-invoicing. On top of this, last year 80 per cent of London Underground commuters travelled without a paper ticket thanks to oyster. Technology cannot be tamed and environmental understanding can only increase, meaning we are on the way to a paper-free, or at least a less-paper office, albeit slowly.