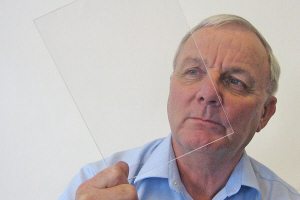 Share via
This year, all eyes have been on touchscreen pioneer Peratech. The technology masterminds have grabbed new rounds of funding and one award after another in the year past – including the Growing Business Awards 2011 Made in Britain award. No surprise: Peratech develops?switches and sensors based on “quantum tunnelling composites”, materials already widely used in robotics, defence and telecommunications.?CTO and co-founder David Lussey, the inventor behind the matter, talked to us about the next big steps in tech.

How has Peratech had the most effect on the technology landscape in the UK?

These days it’s rare that a small company can come up with a new area of patentable science. Peratech’s novel technology has gained the interest of some of the biggest companies in the world and is being evaluated for use in a variety of new products to which it can give unique capabilities.

In a nutshell, what makes you stand out?

We produce a new composition of matter called Quantum Tunnelling Composite (QTC), whose electrical resistance changes when a force is applied, such as touch. It’s a conductive material that is extremely sensitive to its surroundings and can be used to make completely new products or to improve and enhance existing products. For example, QTC can form the working element of new forms of touch controls and touch screens for mobile telephones and similar devices. Screens made with QTC are more sensitive and have more capabilities than screens produced with existing technologies, as they enable three dimensions of touch input – “x”, “y” and “z”.

What do you think will be the biggest change in the technology industry in the next three years?

The human interaction with devices and controls in automobiles and white goods, tools and kitchen appliances in the home is already showing signs of changing to much more intuitive touch control. The whole area of human/machine interface will follow the trail that smart phones and tablets are currently blazing, with their intuitive control actions such as swipe, pinch, drag, and so on.

You won the Made in Britain award at last year’s Growing Business Awards. What’s your opinion on the support we give to young businesses in the UK today? Are we doing enough? What would you change?

Pertatech has had good support from government agencies over the years, but I find that the system for gaining protection for our IP is very heavily biased in favour of large companies. One area of support worthy of mention is that which we get from academe.

Peratech works closely with Durham University, where a research group continues to develop and advance the science of QTCs. In your view, is the collaboration between industry and academe more essential in technology than it is in other sectors? Why is it vital to keep up this research, even as a high-growth, mid-sized business?

Although Peratech’s technology was discovered outside of a university, it was verified by and then progressed under a government grant at Durham University. From the start of Peratech, some 16 years ago, we have funded a series of CASE award PhD students at Durham. In recent years we have funded two other CASE award PhD students at other universities and all are working on some aspect of QTC science. By this means, Peratech can continue the R&D, which is absolutely necessary to evolve the technology into commercially useful products and to underpin the progression of the IP; another important aspect as the technology evolves. This evolution of science, technology and the subsequent IP is an essential feature of building a science-based technology business and I doubt that we could have achieved what we have over the years without the input from the universities.

What’s the big vision for Peratech at the moment? Where do you want to be??

QTC is very sensitive to a number of stimuli and can be used in a number of unique ways. For example, it can be used to sense vapours and “smells”, but it also has a potential for use as a memory technology. My vision is to see QTC used in a multitude of different devices and for it become accepted as a technology which can solve a wide variety of problems.

What was your biggest career setback and what did you learn from it?

Before starting Peratech, I had a long career in the forces. I liked the fact that in the forces rank is carried on the shoulder and gives a good indication of a person’s capabilities and a reasonable character reference. After leaving the forces I made some errors of judgement through trusting one or two Walter Mitty types; as a result I’m poorer and wiser, but fortunately still here. Who will be the next Made in Britain champion?? Nominations are now open for the 2012 Growing Business Awards, in association with Lloyds Bank. We’re looking for entries from “future champion” businesses and individuals across ten categories. Created by Real Business and the CBI, the Growing Business Awards are the most established recognition of UK entrepreneurial achievement. The awards are also supported by Land Rover, the Financial Mail, Spring Law, Cass Business School,?Your Business Your Future, Business Voice, Professional Engineering,?and bdaily. As well as huge prestige and coverage, a group of successful candidates will also be invited to an exclusive “high-performance day” at McLaren Racing, as well as joining a delegation at the 2012 CBI Annual Conference. Nominations close on September 21. Find out more about the Growing Business Awards online, or contact us via?gba@caspianmedia.com or by phone on?0207 045 7600.