Pickering’s Gin may sound delightfully Victorian, but the brand is not as old as you might think. Whilst uttering its name may conjure up victorian images of curling nettles and corsets, Pickering’s Gin was only founded in 2013. However, it relies on the hearty British tradition of gin-making to deliver a product that feels as if a legacy has been bottled and poured.

Marcus Pickering, and his co-founder Matt Gammell built the Pickering’s Gin brand from the ground up, this included constructing their very own distillery in the heart of Edinburgh.

The rather ‘Game of Thrones-esque’ sounding Summerhall Distillery that the two built holds a special title in the city, namely, it was the first exclusive gin distillery to be established in Edinburgh for over 150 years – legacy building or what?

The brand is not only building its own modern legacy, but it’s also inspired from an older one, namely the classic art of gin distillation. The gin recipe itself goes back to 1947.

But for Marcus especially, the love of gin was a family affair too, and after inheriting the recipe in question from a friend of his late father, he wanted to do something with it.

So, as fellow friends and gin buddies, Marcus and Matt embarked on their entrepreneurial journey, armed with little to no background in gin distillation, but with a big passion for having a good old go at it, here is their story:

The two had been friends for years and brought with them a combined professional background including experience in engineering, furniture restoration and property renovation. So how did they turn their combined passions and experience into a gin making business?

“We were working at Summerhall, which is an artsy part of Edinburgh, when we spotted a derelict dogs kennels from the small animal hospital that once stood in the middle of the old Royal Veterinary School, and we thought, hey, we could do something with that,” says Marcus.

“Our minds were completely on our ultimate goal, namely creating a unique and original gin brand. But what we needed to accomplish that was to have a distillery of our own. So we built one ourselves,” he continues.

“The original recipe was created over 70 years ago in Mount Mary, (present-day Mumbai) and was kept as a family secret until 2013.”

“The recipe was passed on to me by a family friend and we were inspired to honour the recipe of fragrant spices and fresh citrus fruits, but we wanted to give it a softer, smoother style to suit modern palates,” he adds.

But how did the duo overcome their experience gap in gin-making?

“Matt and I are inventive by nature, Matt has an engineering degree, so he created a bain-marie heating system for our 500-litre copper stills especially for our distillery,” says Marcus. Talk about being resourceful.

The process, and the secret to launching successfully

But how is the gin made, and how artisan is their process?

“We worked carefully to ensure that our recipe was spot on. We did a lot of work adjusting the botanical weights to get the perfect (old school) gin flavour that we wanted,” says Marcus.

“The liquid then enjoys a slow luxurious simmer, which coaxes out the flavours, all the while remaining loyal to the essence of the original recipe. It’s this mixture of family history and our ‘let’s have a go’ attitude that drove our decision to use an old recipe as a blueprint,” he adds.

For some readers, having a passion for a product or service, and making that jump to starting a business based on that passion with little prior experience may seem a bit of a stretch. But not so for Marcus, who believes that it must all start with an unwaveringly positive intention:

“That  ‘can do’ and ‘make it yourself’ attitude will get you where you want to go, with a lot of hard work, a great team and sheer dedication added in of course! That’s the entrepreneurial blueprint we followed with Pickering’s Gin, and it got us a World Spirit Award Double-Gold Award! I’m not saying that positivity and determination will get you all the way, but it sure helps you on your journey.”

But how about when you’re at that tricky pre-launch phase? Marcus says don’t get overwhelmed by the pressures of timing:

“In such a competitive market, like the one we’re in, the speed of the launch can sometimes feel like the most important thing. But I’ve learnt not to rush a project and to try and get it right from the outset – although this can feel frustrating and like it’s taking too long –  somethings are worth waiting for,” he says.

Since its creation, Pickering’s Gin has become the official gin of the Royal Edinburgh Military Tattoo, and as a result has become a legacy brand for Scottish gin making in the modern age.

But was building this kind of brand the intention for Marcus?

“Right from the start, we worked hard to establish a recognisable brand identity that was distinct on the shelf and was a high-quality product that was distilled with love. The ultimate goal was always to create a drinks brand with an interesting taste, but one that would also appeal to a wide range of gin drinkers,” he says.

“With Pickering’s, the goal was always to work far and wide to establish where potential demand could be tapped into. Even though we work from a small batch gin distillery in Edinburgh, we have a truly global outlook on the business,” says Marcus.

“For example, China has the potential to be a very successful market for us, given that it has a huge alcohol import market, yet there are very few international gin brands that are established there,” he continues.

But how do they plan to strike it big there?

“Well, we’ve already opened the first ever gin bar in Beijing last July in the trendy Sanlitun area of the city. Markets such as Australia and New Zealand are also showing growing interest in the brand – so we have to follow our international fans and demand,” he says.

So what’s the secret to the launch and successful expansion of a ‘traditional’ drinks brand in an already populated global alcoholic drinks market?

“Well, we have a unique brand story and a great product,” says Marcus.

“It’s easy for people to say they have a great product, but we actually do, as customers can see the journey the gin takes, and it all takes place within our very own distillery,” says Marcus. “Coupled with this, we pride ourselves on a ‘make it yourself’ attitude and a dedicated team of self-starters which means that we tackle projects that other brands might see as “too big” or “too scary”, like opening a bar in China for instance,” he adds with a smile.

On the topic of our favourite festive holiday, I ask Marcus if Pickering’s Gin employ a particular product push at that time of year…

“We produce a range of gin-filled baubles for Christmas,” says Marcus.

“We first did it as a bit of fun back in 2014 where we sold them through a local Christmas fair. They were an instant hit and our first proper production run in 2015 sold out in just a few days,” he continues.

“It made sense for us to build on these successes and in 2016, the Gin Baubles made headlines as they sold out in just 82 seconds. Demand has only continued to increase since then and this year we’ve made over 1.2 million baubles to service demand.”

But this was only the beginning of the brand’s very own Christmas miracle and one that was to happen every year, complete with rising sales…

“In the first few years, we sold the baubles ourselves through our online store. We gave our GinFriends (subscribers to our newsletter) first access before they went on sale to the general public,” says Marcus.

“The numbers were impressive and as the years went by, the huge interest meant that we had sparked the interest of and received orders from a variety of local independent stores and bigger chains like John Lewis, Selfridges, and Sainsbury’s,” he continues.

This past Christmas was a rather successful one for Pickering’s Gin:

“We were stocked in over 200 retailers across the country, as well as the bigger chains,” says Marcus.

“We were the first ever alcohol filled bauble to launch in the market, and while there have been some attempts to repeat the formula, the original truly is the best.”

Advice for other entrepreneurs

Before we part, I ask Marcus if he has any snappy one-liners to hand for entrepreneurs who are thinking about launching a new product in a traditional or saturated sector…

“Think about what makes your brand unique – what are the core values that your existing fans love you for? Our ‘If you can’t find what you want, make it yourself’ attitude means that we’ve constantly found new ways to create great products that are still true to our original recipe,” says Marcus.

“Creativity will help any brand distinguish themselves during busy trading periods or in crowded marketplaces, but it has to be backed up by the quality and distinctive nature of the product to stands the test of consumer satisfaction.”

And one last question for Marcus, as Christmas trading is such a key element of his business, when does he start the festive preparations?

“As soon as we come back in the New Year,” says Marcus. “Christmas is big business and many retail partners start planning their Christmas offerings at the beginning of the year,” he says.

“From a production perspective, we’re a small batch distillery – to create over 1.2 million baubles this year, our elves had to start early.”

Clearly, 2018 was a smashing year for Pickering’s Gin, so who knows what new heights they’ll reach in 2019? 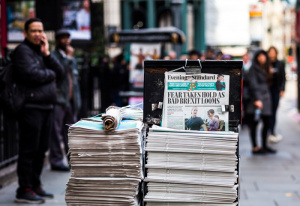 Big business doesn’t talk about disability. Do you?