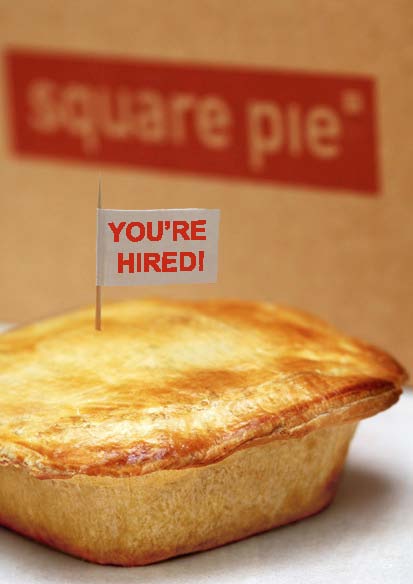 Share via
On last night’s episode of The Apprentice, the candidates were tasked with opening their own fast food outlet. Helen Milligan was?taught the ins and outs of pie making and selling at?Square Pie’s Spitalfields store. The company’s founder Martin Dewey also featured on the show, assessing the credibility of the candidates’ fast-food propositions. Dewey set up the Hackney-based company in November 2001 with one simple aim: to make the best tasting pies from quality ingredients and sell them at a fair price. ?Nobody was doing top-quality pies, so we started making them,” says Dewey. Square Pie uses free-range meat with no artificial flavourings, with pies ranging from classics such as shepherd’s pie and chicken and mushroom pie to lamb tagine. Starting out as a?market stall, it now has stores in Spitalfields, Canary Wharf, Westfield and Twickenham stadium (on match days). In 2007, Sainsbury’s launched a Square Pie range across 71 of its stores. The company also has distribution deals with Virgin Upper Class and Glastonbury music festival (it sold 25,000 pies from its stand there this year). It?pulls in sales of ?2m a year. Dewey is now using the publicity from the show to launch a new marketing campaign. ?Over the past nine years, we have made over 116 different types of pie,? says Dewey. ?Following the success of The Apprentice pie task, we’re now challenging our customers to pitch their ideas for the perfect pie. “Whether a full English breakfast pie or a wild boar with truffles, the best idea will be ?hired? by Square Pie and sold as the monthly special throughout September. The winner will also win one of our legendary ‘Office Pie Days’ for up to 20 colleagues.” (Check out the picture of Richard Branson with a Square Pie on the website ??now that’s what we call a good marketing ploy.) We asked Dewey who he’s putting his money on to win The Apprenice: ?Anyone who can spot that good quality pies are a winning formula gets a big tick in my book so I?m backing Helen to win.?