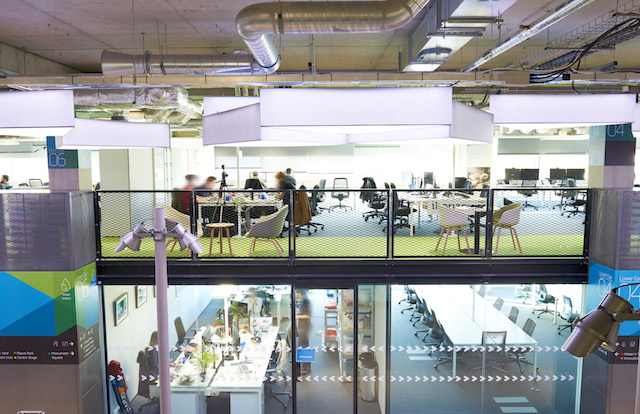 Share via
Nestled among the congregated iron structures of London’s post-industrial east end, a phoenix?is rising. Let me correct myself, it’s already risen and its name is Plexal. Sitting within Stratford’s multi-million-pound regeneration project, it forms part of a greater collective called Here East, a development initiative that brings together businesses, educational and cultural centres in the pursuit of innovation. Boasting over 1.2 million square feet of working space, the Queen Elizabeth Olympic Park is no longer a field of memories from 2012’s games. It now has a future, and that future is fostering the growth of a series of exciting and innovative businesses. Prior to my visiting the site, I am told that there is a bus-shuttle service specifically for Here East that I should board when I arrive in Stratford. Now, I am not much of an East-Londoner, so heading this far east seemed a journey in itself. But upon boarding the specialist bus service, I felt that I was part of something, part of a select few people allowed to visit this new community, but what would I discover? 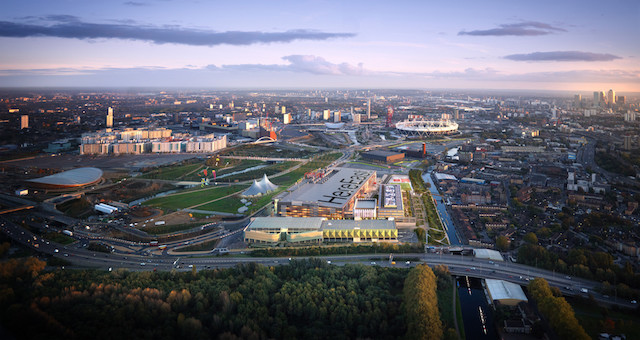 Here East is sort of its own city. Or a city within a city. You could feel that as the bus took you out of Stratford?and into something that resembled an entirely new location. I imagined this is how Silicon Valley employees must feel when they travel into work every day. Pulling into this vast campus space complete with glassy exteriors and free electric scooters, I felt like I was part of an exclusive group of employees allowed to work in an environment that was literally built for fostering greatness. Read the full account of my time at Plexal, or skip ahead to my guided tour and interview with an award-winning businesses leader who calls Plexal home.

It all began when East London was overtaken by Olympic fever back in 2012. Where what is now Plexal’s HQ was once the Olympic press centre. After the event was over, it was agreed that the developed space should serve the community of Stratford and its neighbour, Hackney. This was where Here East stepped in and set about developing a social, educational (a number of university campuses are based here) and business community from the ex-Olympic site. Plexal became the business arm of the new development. Only officially opened by Mayor of London Sadiq Khan in June 2017, I was keen to see how this space was looking a year on…

Andrew Roughan, the Plexal MD who is taking me around the site, is a man with an impressive level of corporate experience. Prior roles include serving as commercial director for data centre business Infinity SDC and general manager for telecoms company Cable & Wireless. But he also has a thirst for creating impact and cross-industry collaboration through enterprise. This desire led him to launch the Here East concept with CEO Gavin Poole following the commercial void left in the area by the ending of the Olympic games. As he takes me around the Plexal site, I see that Roughan is both serious and passionate about the environment he’s helping to create between the businesses that reside here. “Since the initial launch we?ve made rapid progress as a business hub”, says Plexal MD Andrew Roughan as he welcomes me inside the space that’s home to 111 member businesses. “Over the past year, we’ve been filling up with amazing tech startups, hosting hackathons, conferences, launches and meetups. It’s been non-stop and we’ll be even busier next year,” he adds.

Whilst Plexal aims to support and stimulate the growth of tech-based startups, it also carries some very specific goals, such as encouraging the growth of female-led businesses, as well as becoming a hub for cybersecurity. This was evident earlier this year when they delivered Plexiglass, an accelerator programme that helps female-founded startups scale up. Overall, it’s been a busy and purposeful first year for Plexal. In?June this year, they launched LORCA (the London Office for Rapid Cyber Advancement), which marks the start of a three-year programme where Plexal will run bespoke, six-month development programmes for some of the UK’s top cybersecurity businesses.

A co-working space that thinks it’s a city 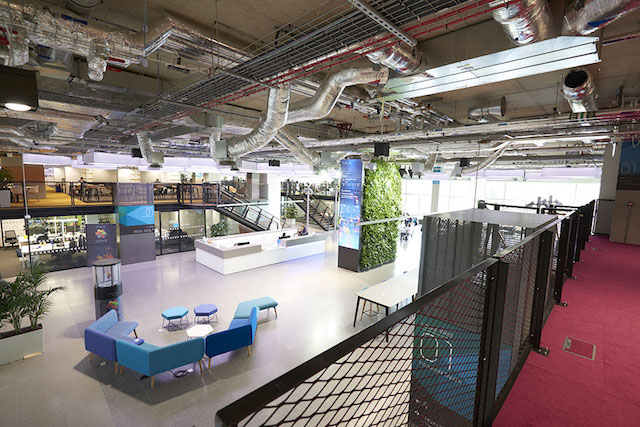 For an environment to produce fruit, the ecosystem has to be right. Think about it, how can a farmer grow healthy crops unless they are equipped with vital ingredients such as sunlight, water, and the right harvesting tools? It’s the same when fostering the growth of businesses in a co-working space. Running a workspace that you can grab a coffee in, or have access to a meeting room, is all well and good. But creating a space with the purpose of fostering innovation makes your chances of creating such an environment?more likely. This is exactly what Plexal did with their Stratford site. The Plexal concept has been devised from the blueprint, and foundations upwards. Upon entering the vast space, you’re instantly aware of Plexal has been designed with the intention of being its own business community. Walking past glassy surfaces and the pleasant smatterings of oxygen producing flora, I notice the hubs of bustling businesses and their hums of conversation. Walking on further, we pass occupied uber-modern phonebooths and a number of physical workshops complete with 3D printers and scanners. Overall the scene is busy, although not crowded, and quietly productive. 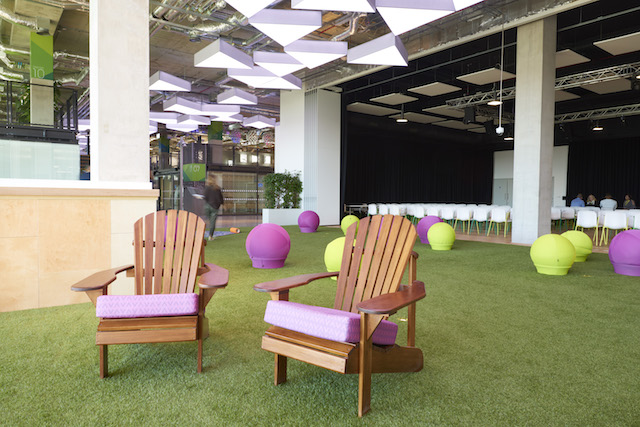 “Whilst we’ve designed Plexal to be like a city, we also wanted to incorporated elements of community you find in the British high-street”, says Roughan. And as we cut through the myriad of arteries that run through the Plexal site, I then realise that these ‘arteries’ actually resemble pedestrianised roads you see across the UK ‘s high streets. “This makes it easy for different businesses to come out of their offices and chat to each other, just like some business owners may do on a high-street”, he adds. What works with Plexal is that it has the space and capacity to create private self-contained office units for businesses that want them, whilst allowing for communal spaces that stimulate inspiration and exchange between themselves and others.

“The size of our site allows us to retain our business talent by providing teams with the space they need when they upscale and grow.”

This is the unique aspect of Plexal. When their SMEs reach that next level of growth, they don’t have to leave to seek a bigger space: “We have the capacity for businesses to grow the numbers of their employees three-fold whilst remaining at Plexal. So it allows them to scale up healthily and grow without interruption”, he adds. “True innovators need two things: opportunities to connect with people and space to think or create in quiet. At Plexal we provide the space and facilities to do both,” he continues.

Plexal offers startups flexible memberships. The membership gives innovative businesses access to a private office or a desk within the space. The membership also includes additional support services from their ‘innovation services team’ who provide various forms of assistance including ecosystem support. Plexal’s vast square-footage also facilities its potential as a key business conference centre in London. They host events frequently including anything from frequent workshops for resident businesses to large conferences.

The award-winning businesses that live here

Even the prettiest, shiniest, most well-equipped co-working space is nothing without the existence of resident businesses that are both innovative and inspirational. On my visit, I was lucky enough to grab a coffee with one of them. What they told me was that Plexal provided a flexible, accommodating and professional home-away-from-home service for tech businesses like themselves. But why does Plexal stand out as an innovation facilitator? Because it understands how tech companies are constantly changing and developing, and Plexal appears to have the capacity. and the will to accommodate these changes. 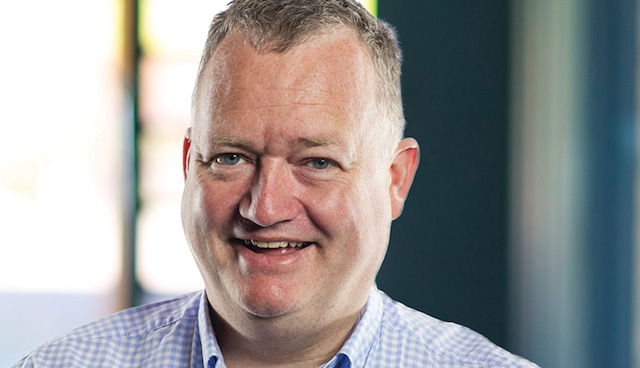 MSquared is a prime example of the high standard of tech-based businesses that call Plexal home. Founded in 2003, MSquared is a photonics and quantum technology company that’s on a mission to harness the power of lasers to solve navigation problems, and even to detect cancers in the body. When I catch up with Malcolm at Plexal, he seems particularly jubilant, but why? Well because he only went and won The Amazon Growing Business Awards Entrepreneur of the Year last Wednesday! So did he feel that Plexal had a part to play in helping the business achieve such a state of recognition? [article id=”128287″ title=”The Amazon Growing Business Awards winners 2018″] “The great thing about Plexal is that they listened to our needs and ran with them to come up with something spectacular”, says Malcolm. By ‘something spectacular’ he is referring to the state-of-the-art laboratory that Plexal built for MSquared, which is big enough to accommodate their large and costly laser machinery. This lab space sits alongside their office at Plexal:

“How many co-working spaces do you know of that would provide such facilities?”

“When you run a company that conducts scientific research and experiments constantly, you usually find yourself attached to a university campus. However by providing us with the facilities that we need, Plexal has allowed us to join a thriving business community”, he adds.

Over the past decade following the global financial crisis, the tech sector has risen up as a true stalwart in the business economy. Thanks to easy internet connectivity, cloud technology and the gumption of ‘technerds’ to go out, and go it alone, the technology economy employs millions and makes millions more in collective revenue. What Plexal is doing by hosting such businesses, and providing them with the space, and the necessary tools to thrive, they are helping to stimulate this economy for the future. By connecting tech impact companies like MSquared with other innovative businesses through their residency at Plexal, they can stay up with entrepreneurial, as well as technological trends. This ensures that companies that are truly making a difference, both in tech and in society, get the opportunity to become disruptive businesses as well as interesting tech companies.