Skip to content
Sales & Marketing
Share via
We?re talking about the new assistant opening for Ryanair CEO Michael O?Leary ? with the airline itself praising the position as the worst job in Ireland. And when you take a closer look at the job advert it becomes incredibly clear why it?s been deemed as such. ?A bright, ambitious qualified accountant is required to assist Ryanair?s misunderstood but beloved CEO,? the advert explained. That doesn’t sound too bad. The assistant will?be managing?portfolios, filing tax returns and doing some investment analysis, but lo and behold, the job?includes some heavy-duty ?MOL-ly coddling? and ?general drudgery?. If you thought the latter two descriptions didn?t make the ad worthy of being called?the worst job in Ireland then feast your eyes on the attributes the airline hopes applicants will possess. Saint-like patience, the ability to work without sleep or have contact with the outside world and an aversion to “bolloxology? are top of the list, alongside ?(ego) massage qualifications? and a must-have collection of poems or bedtime stories. While some will take an immediate step away from the site, it warns that certain people shouldn?t bother looking in the first place. ?Dubs fans, Man U supporters and cyclists will not only be automatically excluded from the process, but will be tracked down, tortured and shot,? the ad for the wort job in Ireland?explained. At this point in time there?s no doubting the advert’s tongue-in-cheek disposition, but given O?Leary?s own statements about those he employs, the above words may, in reality, not be far from the mark. In 2012 he said: “I’m paid about 20 times more than the average employee and I think that gap should be wider.” He also claimed: ?MBA students come out with: ?My staff is my most important asset.? Bulls**t. Staff is usually your biggest cost. We all employ some lazy bas***ds who needs a kick up the backside, but no one can bring themselves to admit it.? But most of all, who would really go for a job the company itself marks as being horrible? The?advert?does, however, demonstrate that a sense of humour right off the bat gives potential hires a certain impression of your company?? and is a nice reprieve from the conventional. After all, your job posting is often the first interaction a potential hire has with your brand, so why not give the impression that your firm is filled with fun loving people? Here’s another company that followed Ryanair’s footsteps ? hoping to employ a CEO. Lululemon ? “Communicating powerfully though Sanskrit” 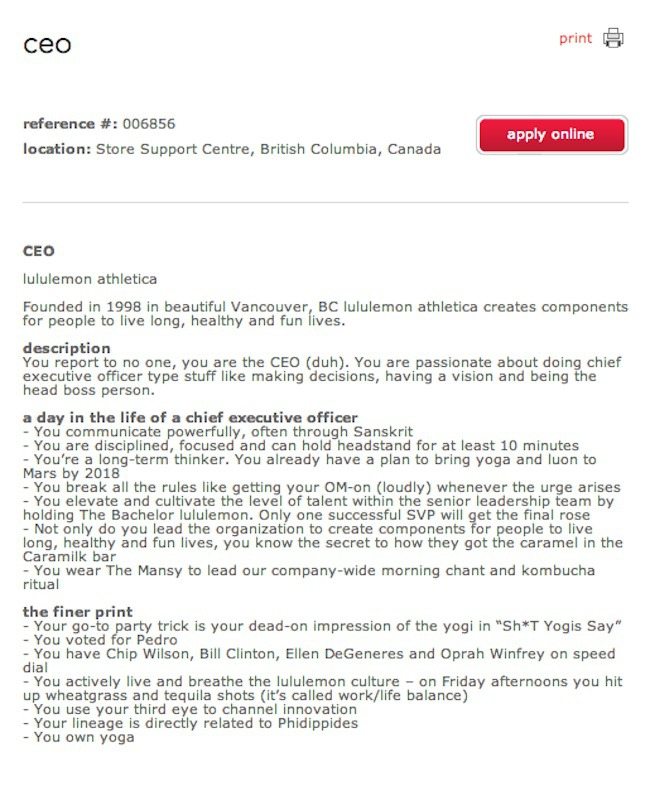