Whilst most marketers have been busy lauding the development of AR and VR, the world of live streaming has been making a strong advance as a hugely powerful tool for engaging consumers.

Given that live streaming is still in its relative infancy, this kind of leap in uptake is unheard of in the media world. It took the telephone 75 years to reach 50m users, radio took 38 years and it wasn’t until 13 years after TV first became available that it reached such heady heights. Its explosion onto the scene means the power of live streaming cannot be understated.

Yet, despite the odd bit of Facebook Live dabbling, most marketers are yet to wake-up to the potential of live streaming and the sheer scale of consumer engagement it can unlock.

So, what makes live streaming so special? The appeal of live streaming lies in its ability to blend the old with the new. Whilst television’s popularity has waned during the on-demand revolution, it is still a powerful medium that is enjoyed across the generations.

Live streaming combines the romance of TV, with the convenience, power and immediacy of social media.

For a brand looking to connect with an audience, this offers a powerful proposition. Brands and influencers can have real-time conversations or distribute compelling content to millions of consumers at just a few taps of a button.

When looking back at the most iconic TV moments, from dramatic football games to reality TV show finales, the common theme is that these programmes were live. “Live” helps unite viewers with a sense of common purpose and allows them to feel as if they are part of something special.

Despite the opportunities in live streaming, there is still progress to be made. One of the most common reservations from marketers is that they’re worried about pulling in enough viewers for key pieces of live content.

What if they host an incredible event, shell out thousands of pounds on influencers and no-one tunes in? It’s a common, and valid, concern.

This issue is where my business spawned from – helping bring more visibility to the thousands of live streamed content out there, so brands and consumers alike can make the most of them.

A user who has taken the time to schedule a live stream (and look forward to it) is likely to be a more active viewer than one who is passive and merely stumbled across an interesting stream.

Live streaming is a wonderful way in which to connect with your target audiences and allow brands to get creative with their content. With all major social media platforms ploughing plenty of energy into promoting their live capabilities, it’s clearly here to stay.

Marketers, whether working for large or small organisations, should be looking at how they can integrate live-streaming into their marketing strategy and unleash the power of live.

Trevor Evans is CEO and co-founder of Stream Time, a TV guide for live streams

The recent 20th anniversary of Buffy the Vampire Slayer’s TV premiere offers a good example to businesses why great content, no matter how old it is, still appeals to customers. 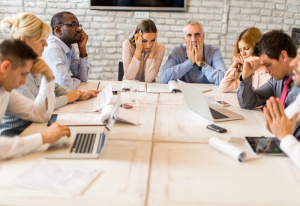 Why do we try to sabotage corporate change?