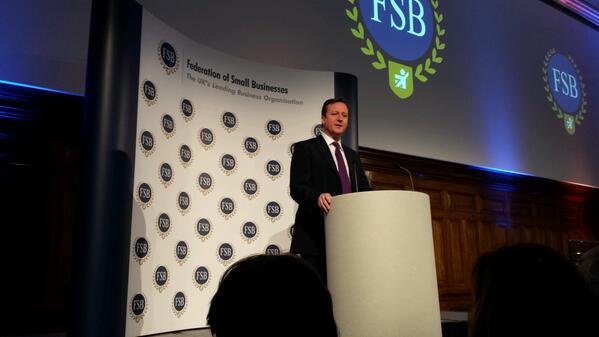 Speaking at the Federation of Small Businesses (FSB) policy conference today, Cameron said: ?We have trawled through thousands of pieces of regulation ? from the serious to the ridiculous, and we will be scrapping or amending over 3,000 regulations ? saving business well over ?850 million every single year.

?That?s half a million pounds which will be saved for businesses every single day of the year.? Cameron also said he had ?led the fight in Europe? to tackle Brussels bureaucracy. This will be the first government in modern history to leave office with less regulations in place than when it began, he said.  Mike Cherry, the FSB’s national policy chairman, said that red tape is a burden on small businesses and the changes will help.  He said: ?Importantly Government should ensure when changes are made, they are done properly and with small businesses in mind and we would encourage it to look at how tax administration is regulated, as this area places the biggest burden on small firms. ?There is more to be done, and highlighting how Government will help increase banking competition is vital as is increasing government procurement contracts going to small firms.? Alexander Jackman, head of policy at the Forum of Private Business, said: “The Government has done a solid job in tackling the overall number of regulations out there and we congratulate ministers on that. What it needs to do now is commit to avoid changing the existing rules as often, to reduce the cost of compliance.” Image source